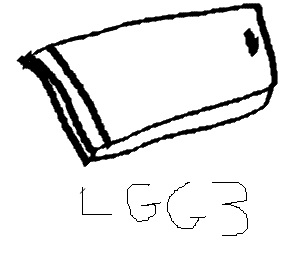 When I was in the market for a new cell phone a while ago, I did a lot of research. My last phone was OK, but I realized later that I had much better options available. I didn’t want to make the same mistake twice.  After much thought, I finally settled on an LG G3 Smartphone.

Now, without getting into all the specs and stuff, the phone is pretty sweet. There is one thing, though, that I neglected to look into, among all of my research – what happens if your small children get a hold of the phone? I don’t know about you, but my kids are always fiddling with various electronic devices, usually to negative results ( ie. Hmm. That’s weird. I thought I taped Better Call Saul last night. Where’d it go? And why did someone record two minutes of an episode of Teenage Mutant Ninja Turtles?).   Here’s what you’re probably wondering, then: just how “kid-proof” and ‘”parent-friendly” is the LG G3 phone?

B does this thing, where he’ll steal my phone, and take off with it, which causes me to chase after him. When I catch up to him, he panics and drops it. Haha. Hoho #Boyswillbeboys. So far, my LG G3 has survived numerous drops on carpeted and tile floors, without a dent.

B and J are fans of the selfie, both in taking them, as well as looking at them.  The LG G3 has this feature where if you hold your hand out in front of the screen and then make a fist, it sets off a timer. This allows you a few seconds to adjust the camera and get into your pose, prior to the shot being snapped. Once I got the hang of it, taking the perfect selfie couldn’t be easier. It even works with two hyperactive kids. Check it out! 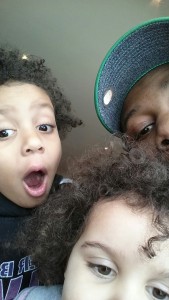 That’s not a a very good picture. 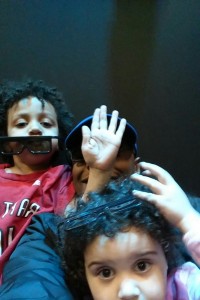 This one’s even worse! None of you are ready for the shot.

I Can Lock My Kids Out Of It

I’ve lost track of the number of times that K has come to me, complaining that B or J got into her phone, and deleted a bunch of stuff. The problem is the security feature. It is just a password, which B and J, against all statistical probability, have somehow figured out. With the LG G3 phone, however,  I’ve set it up so that my security feature is a custom series of knocks. You can’t unlock my phone unless you know the way to tap the screen. This has totally thrown B and J for a loop. I remember one time, when I couldn’t find my phone. Eventually, I found J with it, in a closet, sadly mashing the screen, to no avail. Mysuper important personal information is safe from curious children.

It Doesn’t Take Pictures On It’s Own,  Of Stuff That Might Be Useful Later

I had this conversation with J recently, driving home one night, discussing the happenings of that day:

Me: And then I had pizza for lunch.

Me: Whats so funny?

J: You don’t have lunch at work!

J (silence for a few seconds while she thinks)

Me: Show you what?

J: Show me you eating pizza.

J: On your phone. Show me a picture of you eating pizza.

Me: I didn’t take a picture.

Me: I….don’t usually take pictures of me eating.

J ( while laughing hysterically): You’re tricking me! You don’t eat lunch at work!

And that was that. Without physical evidence, I could not prove my case.  If only I had a picture. Unfortunately, The LG G3 phone lacks the ability to randomly snap shots without your involvement. It should know what future arguments you are going to have, and act accordingly. Maybe the new  LG G4 has this feature.

One day, I asked J what she wanted for breakfast one morning, She said cereal. Perfect! Nice and easy. I then asked her what kind she wanted and listed off the options in the pantry.

Cinnamon Toast Crunch. Which I didn’t list, because we didn’t have it.

Her reaction to this? She dropped to the ground and cried uncontrollably. After a few minutes, she stopped sobbing and blubbered “Check it on your phone.” Needless to say, the fact that my  phone was not able to save the day and magically pull a box of Cinnamon Toast Crunch out of the air was pretty disappointing. Step your game up, LG.

It Can’t Travel Back In Time

On another occasion while driving home with J, the conversation turned to my favorite stuffed animal when I was her age (three). After I told her a bit about Mr. Wrinkles The Stuffed Dog, she casually asked to see him on my phone. I casually said that wasn’t possible, and she causally got ticked off.  This is another drawback. The LG G3 phone can’t go back in the past to document every important event in your life. Sorry, McFly, reliving memories is not just a click away. I’m pretty sure Apple is working on an iPhone which is able to time travel, though. 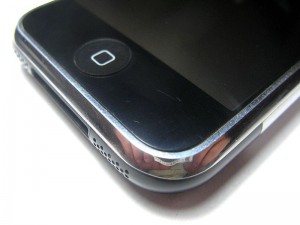 Time travel? There’s an app for that.

The LG G3 does a lot of stuff well. However, for a smartphone, it really isn’t that smart.

I don’t know. I’m really not qualified to be reviewing phones. There are a million better places to turn to, for that kind of advice.

That’s all that I got. Before I go,  let’s try one more selfie! 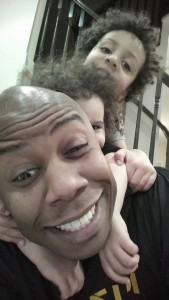 How many times have you tried to do this? And this is your best shot?