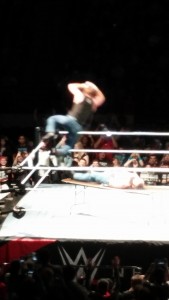 As I’ve noted before on this site, my son is a big fan of World Wrestling Entertainment.  On May 2, the WWE Live tour came to Hamilton, and, courtesy of two tickets from the WWE, we were able to attend the event!

In the weeks leading up to the show, to say that B was excited was an understatement. This was his first time seeing it live, and he was pumped to see a bunch of Superstars in person.  Not going to lie, though. As a parent, I was a bit nervous. I had been to live shows in the past, and it wasn’t the most family friendly environment. Now granted, this was years ago, before the shift to the more PG rated product that B was familiar with. I did do some online research beforehand, as well, and the general opinion seemed to be positive, in terms of taking small children. So off B and I went!

The first thing that I noticed, when we got to our seats, was that there were a TON of families with little kids in attendance. Almost all of them had merchandise and/or signs, supporting their favorite Superstars.

Me being old school, I had decided to rock a Mr. Perfect shirt to the show: 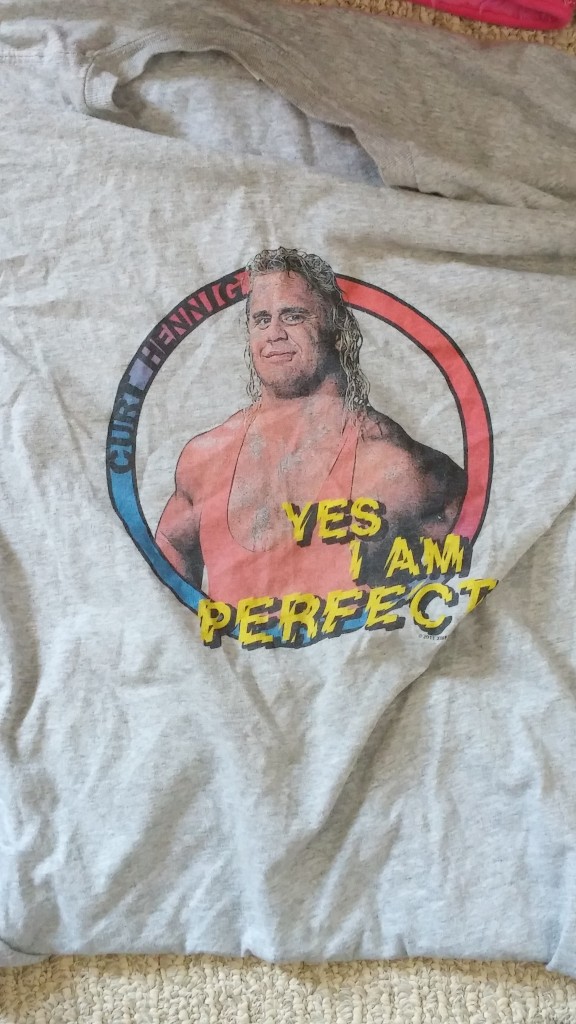 No. No I am not perfect.

And B being new school, he decided to rock a bunch or random wrestling stuff, along with a shirt of his favorite wrestler, Kofi Kingston: 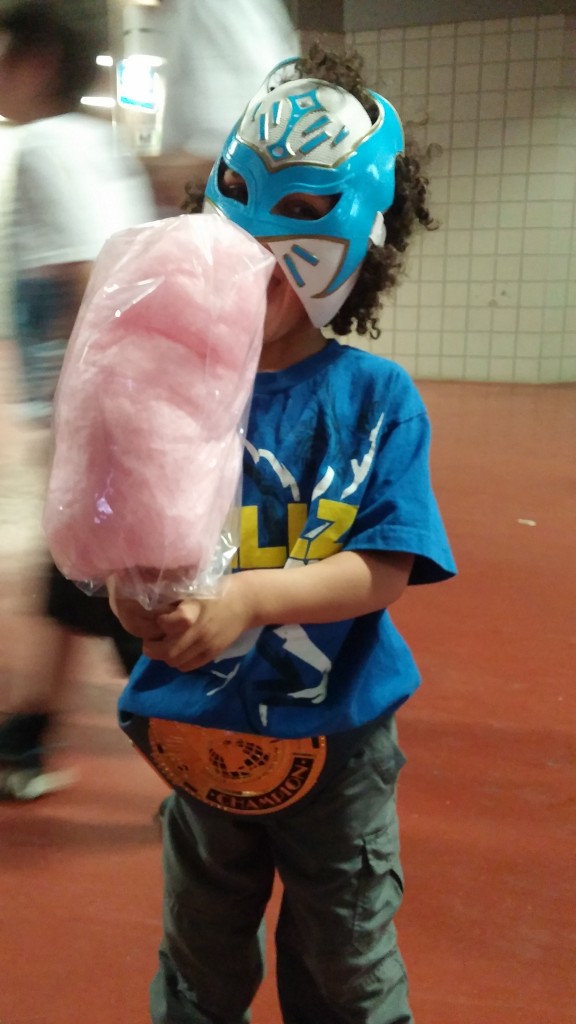 The second thing which I noticed was that letting B pick cotton candy as a treat probably wasn’t the best idea, as he devoured it within minutes.

Uh, can you say sugar rush?

The show started with Bad News Barrett’s entrance music filling the FirstOntario Centre. When he came strutting out, B hopped out of his seat and booed him, along with most of the other fans. Wrestling is all about good versus bad.  The babyfaces and the heels. B gravitates to the nice guys and girls. Through the whole night, I could tell that he had a blast cheering all of them on to victory. The atmosphere really was bananas, too. Thousands of people just losing their minds at the performers. It really wasn’t that hard to get caught up in the excitement!

My concern about the family friendliness also turned out to not be too big of a deal. In our section, someone did let a profanity slip once, but I heard him be quickly admonished for it (because there were kids around). From then on, “Kick his butt!” or “So and so sucks!” was the extent of the bad language.

Speaking of sucking, let’s go back to the aforementioned Kofi Kingston. B loves him, mainly because of the fact that he has always been a good guy. Recently, though, Kofi started a team with two other wrestlers called the New Day. They’re basically three happy-go-lucky guys who fans should cheer……but they don’t. So basically, Kofi’s character is a good guy who people boo. As a result,the New Day are slowly turning into bad guys. 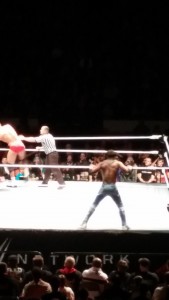 As luck would have it, the New Day actually wrestled at the show! B instantly recognized the first chords of their entrance music, and started freaking out when they entered the arena. This made me freak out, too. We were the only freaks, unfortunately. They got booed lustily by everyone else, and pounded with ‘New Day sucks!’ chants, throughout their match. Our feeble attempts to start a ‘New Day rocks!’ chant fell on deaf ears. The highlight/lowlight was B hopping onto his chair, to yell “New Day does not suck! They rock!” (don’t worry, I did pull him down, and told him not use the word suck).  New Day lost the match, but still walked out with their tag team championship belts, which thrilled B. He got to see his fav wrestler in person, who left with his gold title, to our cheers. Sweet! 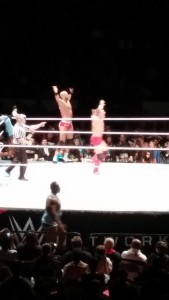 All in all, the show was about two and half hours, but it flew by. In terms of the Squirm Test (how I tell if my kids are feeling something, based on how much they squirm), it was a success. B was on the edge of his seat the whole time. The only time he started to get fidgety was during the last match, a wild brawl  between Dean Ambrose and Luke Harper, which went all around the ring, and had them putting each through tables. B was getting pretty tired by that point, so I don’t blame him for getting restless. 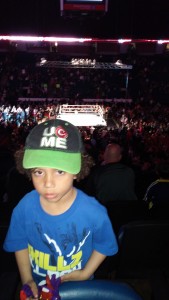 One sleepy looking lil man, on our way out.

One final note – man, some of these wrestlers are huuuge. TV doesn’t do them justice. The fact that dudes that large can pull off the athletic stunts that they do is pretty incredible.

Thanks again, WWE, for the hookup. Sports entertainment at its finest. Great night at the fights!