Recently,  Medieval Times Toronto hooked me up with some tickets, to come check out their castle with my family. Here’s my  honest review of the experience. 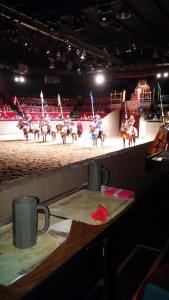 Now, I’m not going to front, I had heard of Medieval Times before, and I had seen commercials for it, but I honestly had no idea what it was all about. I kind of thought that it would be like The Princess Bride, with people saying ‘inconceivable’ a lot. Despite my poor attempts to explain it, my kids were pretty stoked to go, though. B wanted to see some knights kick some bad guys’ butts, and J wanted to stuff her face and watch the horsies.

We were advised to arrive early, so we showed up an hour before our showtime. The first thing you notice, when you step through the doors, is that all of the staff are in character. It was pretty cool being called ‘my lord’ by everyone that I talked to. A guy could get used to that, in everyday life.  Anyway, the other thing you notice is that this really was a kid-friendly place. There were tons small children running around, who looked to be five years old or younger, like B and J.

Because we were so early, we had some time to check out the castle.

K and I bought some light-up swords for the kids, from the gift shop! 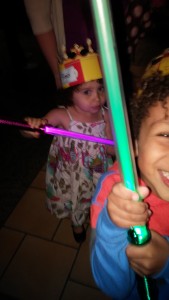 B saw a falcon up close! 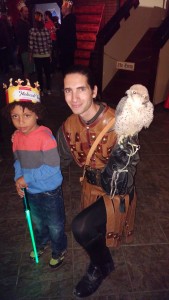 While B and J didn’t really appreciate it, K and I got a kick out of the dungeon, with all of the old torture devices on display! 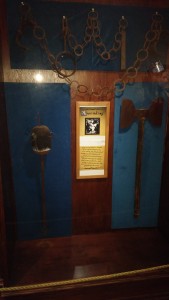 And we even posed for a family picture, with the princess! 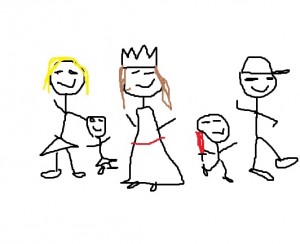 Note: The actual family picture came out pretty ghastly, despite everyone’s best efforts. You don’t want to see it. Imagine one happy princess surrounded by one disinterested kid, one miserable kid, and two fake smiling parents who look like extras in Soundgarden’s Black Hole Sun video. Just terrible. Don’t worry.  I’m sure you’d have better luck getting a nice shot than we did.

Eventually, it was showtime, and we made our way to our seats. Front row center, in the red and yellow section. Upon arrival, we were greeted by our server, err, I mean, serf. Throughout the evening, he did an awesome job in keeping the drinks and food flowing. The four course dinner consisted of garlic bread, tomato bisque, roasted potato, cob of corn, a big piece of oven-roasted chicken (or, as the serf told B, much to his disgust, dragon meat), and a butter tart for dessert. All of  this was eaten like in medieval times – with your bare hands (if those hands happen to be little, though, like B and J’s, cutlery is available!). The food was tasty and filling.  Both kids ate a decent amount, and I was happy to see our serf come by, unsolicted, with takeout containers at the end of the meal, for leftovers.

Now the show itself. Without getting into all of the details, let’s just say that it is pretty entertaining. The arena is broken up by colours, and each colour has a knight to represent them. As an added touch, on the way in, all of us peasants were given a paper crown to rock, with the colour of it corresponding to the section we were in.

Throughout the evening, the knights engaged in different competitions. Many were on horseback, but the final fights were on foot. B and had a blast cheering on the knight reppin’ our section, red and yellow. J, as expected, had a blast watching the horsies. 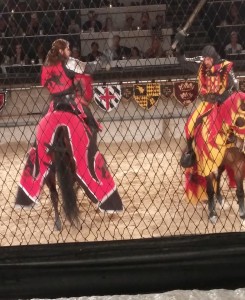 With all of the cheering, music and flashing lights, the atmosphere was crazy. Just a lively, raucous environment, especially during the final battles.

In between the competitions, there were other aspects of the show, too, like a story involving some bad dude who wanted to capture the princess, as well as a performance from the Royal Falconer (the breeze of the falcon whizzing past my head knocked my crown off!).  Because of how well the show was paced, B and J were riveted the whole time. This kept the usual bickering/complaining/silliness to a minimum, which was rare and awesome. Much to their delight, too, our knight was the overall winner!

All in all, the evening was a success. Before the show was even over,  B and J were both asking  us when we were coming back! The four of us had a lot of fun, and the time flew by. For not knowing much about Medieval Times going into it, I was very impressed. For what it’s worth, I recommend it as something for families of all ages to check out sometime, if you’ve never been before.

One other highlight of the evening was when the red and yellow knight was throwing flowers into the audience. You know when you go to a sporting event, and during a break, they do a t-shirt toss giveaway? Everyone in the crowd jump ups and yells for a t-shirt, but it never actually gets tossed to you? It was like that…….except B and J actually got tossed a flower! They agreed to share it, of course.

Speaking of giveaways, one lucky reader is going to get hooked up, too. Medieval Times Toronto is going to give one of you four general admission tickets! Enter below.

ELIGIBILITY – Open to all residents of Canada, except for Quebec. Tickets are valid until September 1, 2015.