I don’t know about you, but I’ve had a few brushes with fame in my life. Of these celebrity encounters, one has always stuck with me, though. One which always made me question what makes for good role models.

At a 1994 FIBA World Basketball Championship game, when I was a kid, NBA star Toni Kukoc happened to be in the stands. This totally got me starstruck.  People were coming up to him in his seat, between breaks, so figured I’d ask him for an autograph, too.  I remember being super nervous as I got closer and closer to him. When I did get near, I didn’t get a chance to speak, unfortunately. Mr Kukoc, without looking at me, said “Get out of my face.”

I couldn’t believe it…..but he then said it again!

The dude he was with also told me to go away, which I quickly did.  Once the shock wore off, I can’t say that I was really upset about the incident. It was more of a disappointed, angry feeling.  However, because of that one moment, in my opinion, Mr. Kukoc (who may be a swell guy, to others) was, and always will be, a jerk. 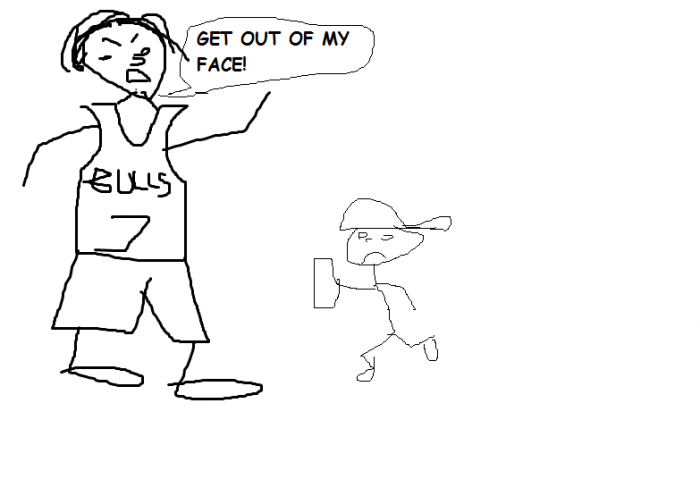 Let’s now talk about the other day, when like father, like son, B had a similar  “celebrity” encounter.

It happened at a Toronto Raptors 905 NBA G-League game. B was there with his basketball teammates and their parents, which included yours truly. Midway through the game, a bunch of them noticed Fred VanVleet, point guard for the Toronto Raptors, was also in attendance. Like any 8-10 year old hoops fans, they were excited about seeing a real life NBA player. So, at halftime, one of the other dads in our group took the boys down, to meet Mr. VanVleet, and get autographs.

Now, to be fair, I didn’t see what exactly happened next. I can only go by what B and the other parents told me.  I saw the group down near where Mr. VanVleet was, and then I looked away for a bit. When I look back, I saw the group walking towards our section, with a bunch of disappointed faces. From my understanding, Mr. VanVleet saw the team approaching, and legit turned his back on them to talk to someone else instead. A 905 representative came over as well, to tell the boys that Fred VanVleet “wasn’t available”. I guess the optics of it were savage, as one of the dads got really worked up when he saw the incident occur.

Now look, there are always two sides to every story.  For all we know, Mr. VanVleet was having a bad day, and is normally very accommodating to his young fans. It could have been a case of bad timing and miscommunication. He could possibly have been sick, and didn’t want to infect the boys with his illness. Or, maybe, he just wanted to enjoy the game, without having to interact with the general public.  In any event, why he wouldn’t be more appreciative to the ones who put him on a pedestal so he can make a comfortable living playing a freaking game?

I understand that, in our culture, we tend to idolize, romanticize and build up celebrities. They are what pass for good role models.  Shoot, I remember last year, when B and I went to a 905 game, Mr. VanVleet was on that team, as just another guy. I don’t think he had many people looking to take selfies or get an autograph then. To go from there, to now playing a regular role on one of the best teams in the NBA, well, I’m sure a lot of stuff comes with that. It’s just like if anybody in any job works their way up to become successful. You hope that they remain decently humble and stuff doesn’t go to their head, but that’s not always the case.

Yet, who are we to judge, if the celebrities we make for good role models turn out not to be who we thought they were? They’re  human beings, too. They don’t owe us anything. If they want to turn their back to ignore a group of kids, in spite of how bad it might reflect on them and their employer, it’s their choice, right?

Like Charles Barkley said back in the day – just because someone can dunk a basketball shouldn’t make them a role model. Just because someone plays a hero in a movie doesn’t mean that they aren’t a scummy deviant once the camera stops rolling. I guess that’s on us, for buying into the facade, when the truth emerges.  With all that said,  finding out Toni Kukoc is a jerk still kind of hit me the same way as when I found out Santa Claus wasn’t real. It sucked.

Unlike my Kukoc experience, B’s night ended on a happy note.  At the end of the game, B’s team went down to high five the 905s as they walked off the court. Bruno Caboclo, sometime Raptor/sometime 905er, on his way out, high fived everyone, AND signed every autograph, no questions asked. The kids were pumped and had the biggest smiles when they came back to us. This made their night, including B’s, who doesn’t want me to wash his autographed shirt now!

Actions speak louder than words.  And when you’re on a pedestal, good role models or not, it can go a long way in affecting how you’re perceived.
Fred VanVleet, you lost some young fans that night, bro, sorry.  Bruno Caboclo, on the other hand, gained a bunch.

1 thought on “No Good Role Models”