Make A Dollar Out Of 15 Cents

If I’ve said it once, I’ve said it a thousand times – never underestimate the power of a child’s imagination. Even though the game’s changed, and kids nowadays are different than how I was when I was a little, this statement still rings true.

B and J, for example, love technology. If left to their own devices, they could spend hours playing on their devices, or watching TV, Netflix or Youtube.  And in all honesty, sometimes I don’t mind a little tech time. It’s a break from the chaotic havoc and non-stop bickering that usually goes on in our house. The kids quietly staring at a screen, not getting into trouble? Sign me up!

The downside, of course, is that too much screen time will probably turn their brains into mush. Therefore, kids need to find other ways to entertain themselves. And I gotta admit, when it comes to making something out of nothing, to combat boredom, J is a pretty resourceful girl.

Take last Sunday, for example. It was just J, little KJ, and yours truly hangin’ and bangin’. Out of nowhere, J blurted out that she was going to make a train.  Lacking anything even remotely resembling train parts, I had no clue what her plan was. She then ran off to the garage, came back with two giant boxes and put in some work. 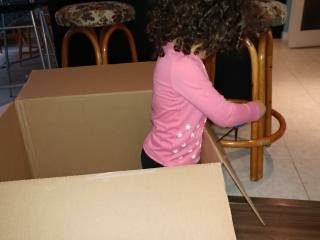 A while later, here was her end result: 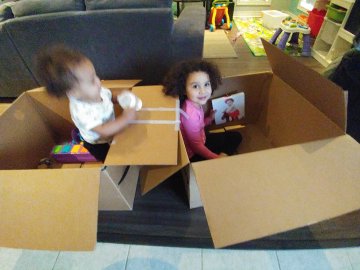 Two train cars, attached with tape. One baby-friendly, with toys and snacks for KJ.  One J-friendly, with, uhh, a picture of her hanging in it, for some reason.

They played in these for a while, including pulling them around the kitchen, making “stops”. Eventually (or a lot longer than I would have thought, since it’s just two boxes),  J got bored and tried to play on her tablet. I could tell that KJ wanted to keep playing with her, though, so I suggested that she entertain him. 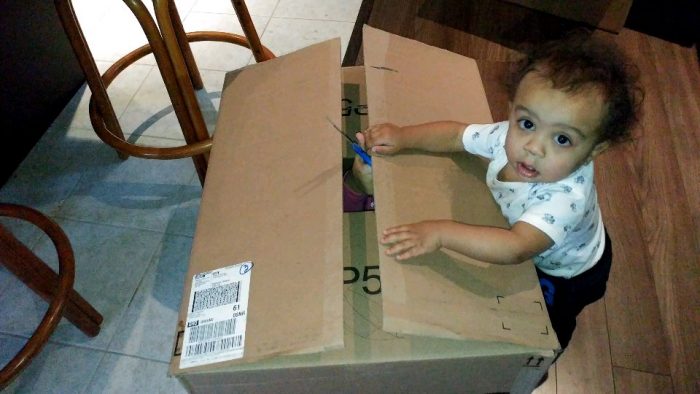 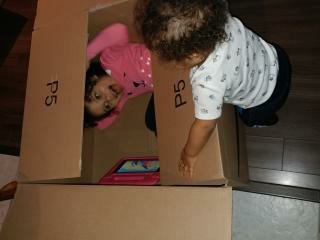 This literally involved J hiding in a box and KJ opening it up. To his credit, KJ seemed impressed each time he peeled back the flaps, and saw her sprawled inside.  You know,  like how Kristen Wiig and Maya Rudolph looked when they opened their presents in that Saturday Night Live “D**k In A Box” video.

Later that evening, after I put KJ to bed, I heard J singing. While some kids belt out Disney songs, or Bruno Mars hits, or Cardi B jams (see, I’m hip to today’s music), J was singing about…..punctuation.  I went in her room, and saw her standing with a marker in hand, beside this creation: 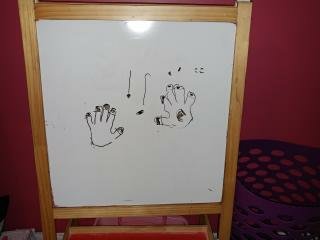 We then had the following conversation:

Me – What are you doing?

J – Yeah.  My teacher says that I need to practise my anxiety. *starts singing about puncuation*

Me – I don’t think that’s the right word. You drew some punctuation marks.

J – Oh. There’s four of them! Question mark….explanation mark….comma…..what’s the fourth one?

J – Oh right! I forgot. Then what are these? *scribbles randomly*

Me – Those aren’t anything. Why are their hands?

Maybe the hands were anxiety hands. Who knows.  You catch my drift, though. Leave a kid on on their own, and they can come up with some wild thoughts (word to DJ Khaled!).

Anyway, I went downstairs after that encounter. A bit later, since imagination knows no timeframe (re: she didn’t want to go to bed),  J came downstairs, to tell me about her latest project: 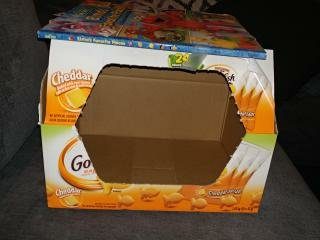 J – You know how you always wanted a puppy house?

Me – I’ve never said that before. We don’t even have a dog.

J – Well feast your eyes on this! See, you just put your puppy in here, and they can sleep in it.

Me – Ok. This is awesome. But the roof is a book? What if you want to read it?

Children’s imagination, people. They can turn nothing into something better than we can, for real.  And that’s not even getting into the deadly burglar ball that B and J concocted.

Until next time, peace!