Working From Home With Kids And Other Quarantine Life Stories 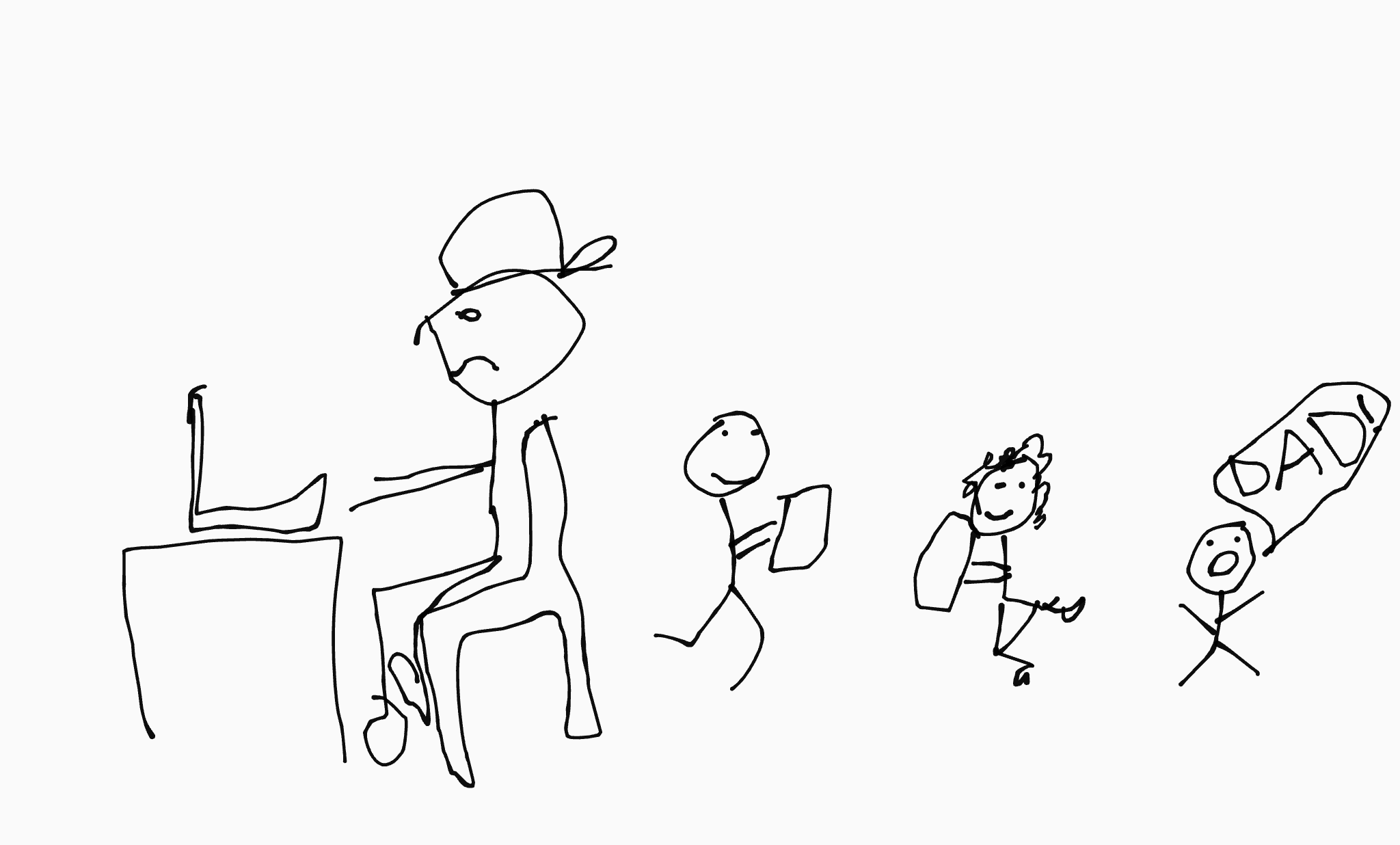 Hey, all you cool cats and kittens! When I last gave y’all an update, my family was still adjusting to that quarantine life. I was also still adjusting to working from home with kids, too. Since that time in early April, a lot has changed.  With these changes comes lots of free time to analyse them. Or, in this case, blog about them. Random musings start……NOW!

WORKING FROM HOME WITH KIDS

We’ve settled into a workable routine, on this front.  I’ve been fortunate enough to remain employed, so I do my work upstairs at a table by the window.  With no door, my space is the definition of ‘open door policy’, which my fam takes advantage of.  Luckily, this hasn’t affected my job too much. I mean , only one client on the phone has heard little KJ screaming “Daddy! I POOPED!” in the background, anyway.

Back in the early days of self isolation, there was still a hope here in Ontario that schools might open up before the end of June. This all changed recently, though, when the government announced that schools will be closed for the duration of  the year.  K, who is a teacher, has seen her job responsibilities change lately, with a greater emphasis on distance learning. So between her work, and mine, plus B, J and KJ, it’s a juggling act, for real. Speaking of which…..

TEACHING THE KIDS AT HOME

B and J both have daily curriculum distant learning requirements. I don’t know about your kids, but getting these two to do even the bare minimum is a regular struggle. Dragging them away from their devices to do just an hour of school work is the parenting equivalent of playing Pac Man. They zip around the house, gobbling up screen time, but as soon as they see K and I with assignments, they immediately take off in opposite directions.

Even if we track them down, they still make excuses to not do their work.  Oh, the excuses! The other day, B looked at a project, and told me that he couldn’t do it, because it would take 24 minutes, and his arm would get sore from writing for that long. This is the same active kid who will shoot hundreds of shots on the mini basketball net in his room . The same kid who sits in the same position for long periods playing video games. Maybe if he thought that it would have taken 23 minutes, then he would have done it? 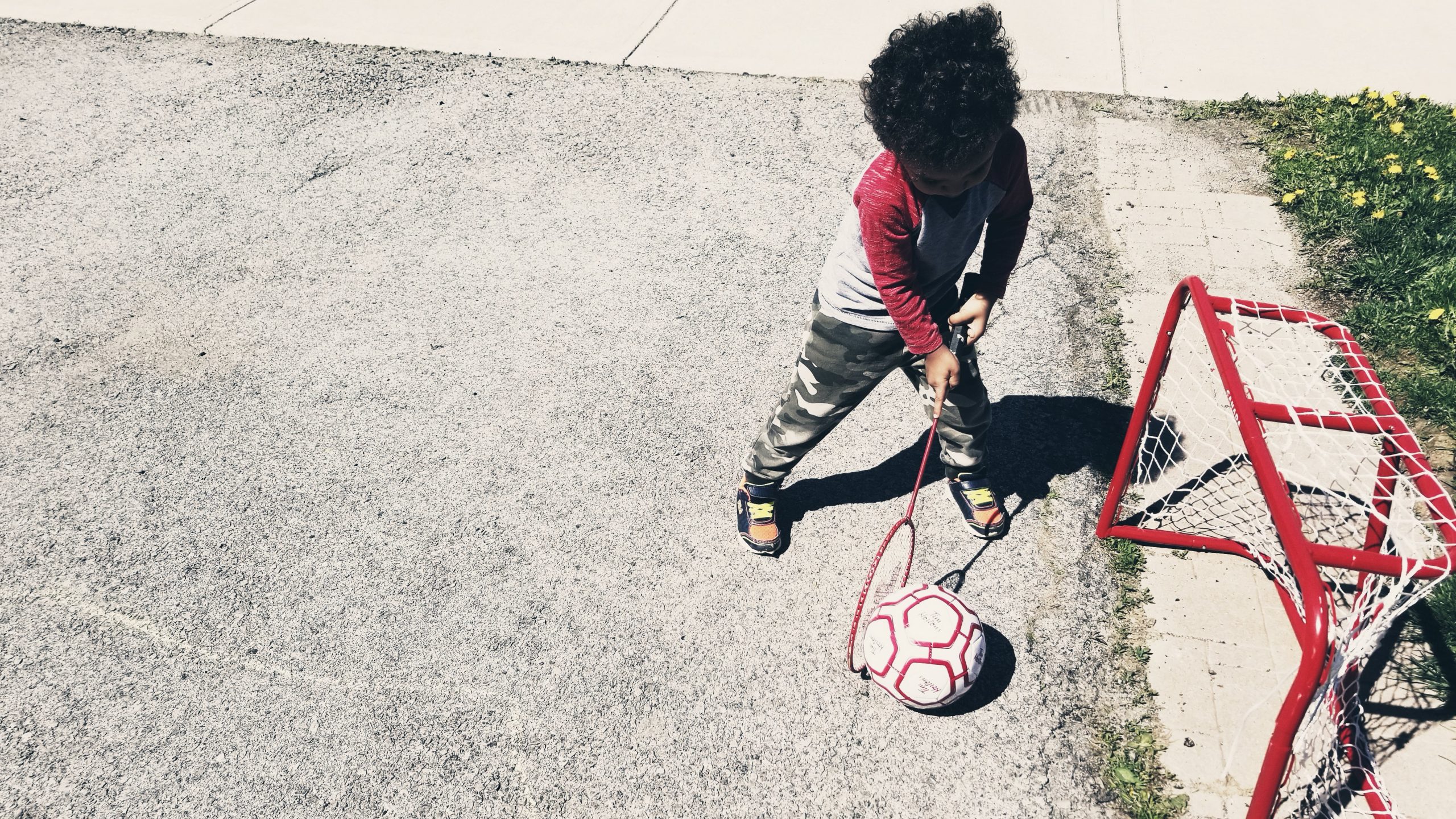 With toddlers, routine is key.  KJ’s life used to consist of waking up early,  and me getting him ready to take him to his daycare. He spends the day there, hangs with other children, gets picked up by K later, comes home, does dinner, then eases into his bedtime routine.

In quarantine life, now that we are working from home with kids, his routine has been blown up. KJ is now the type who will wake up at 10:30am, ask if it’s breakfast time or lunch, and get mad when he can’t have a Popsicle and garlic knot to eat. He’s the type who doesn’t nap anymore, and doesn’t understand why he can’t take a toy boat that’s bigger than him to bed, when he’s tired. He’s the type who will happily sit around almost naked all day.

I can’t blame the poor kid. Think about it. What if you couldn’t tell time,  had zero responsibilities, and were completely dependent on someone else to provide for you?

What would you do?

Shoot, you’d probably sit around in your underwear , confused, wondering why you can’t eat garlic knots for breakfast, too!

KJ does not have any peers his age, to interact with.  B and J do try to entertain him, but the age gaps between them makes it hard. As such, KJ is usually left to his own imagination, to amuse himself.  Mr Sun is now his good friend, for instance.

I’ll also do the honors on a  daily basis, and try to play with him.  Man, if I’ve said it before, I’ll say it again – never underestimate the imagination of a child.

KJ came up with this one game for us to play recently. Him and I were firefighters. We lived at the firehouse with our baby. I don’t know how we became parents to this kid, but bear with me.

We would then get an emergency call and have to go rushing to a room in the house, to deal with it. Did I mention that we had superpowers, too? And that we had to stop villains, in addition to putting out fires or rescuing people?

THEN, when we were done solving the emergency, we would come back to the fire house, but our baby was missing! So, we would have to try to find him in the house, as well.

This game went on for like two hours. Every nuance and plot twist was his idea.  It was basically the best/worst action movie that I could think of. Quentin Tarentino would be proud.

Remember that movie Encino Man? A caveman gets unfrozen in the modern age, and  early 90s, Pauly Shore-led hilarity ensues? Working at home with kids and living the quarantine life got me pondering this analogy.

What if I was frozen in January, and unfrozen last month? It would have been a huge culture shock, correct?  The city would have been like a ghost town. Few cars on the streets. Most stores closed.  Rec centres, movie theatres and other fun stuff closed.  No sports to watch. Long lineups to get into grocery stores. Not many people out and about.  Something called Zoom would be my go to app.

Ontario recently started to loosen up some of the stay home restrictions, in phases. We are currently in the early stages of this, proceeding with caution. The funny (not funny) thing is, though, if I  was unfrozen today……it wouldn’t be such a culture shock.

In my part of Hamilton, Ontario, anyway,  there is a lot more normalcy around town.  Large gatherings  of people hanging out shoulder to shoulder in their driveways. Groups of  neighborhood children playing together. Teen friends shooting hoops.  Drive-by birthday parties have become full-on birthday parties. I go by the nearby school (still closed), and the parking lot is half full of cars and people.

It makes me wonder…..is all of this too much, too soon? Should more responsibility be taken, in following the stay home recommendations? Or are we at the point where-stir craziness and mental well-being wins out over worrying about getting the coronavirus? Is the worst really behind us? I don’t know, man.  All I know is that if I was frozen today, and unfrozen six months later,  and I find out that we’re still dealing with second or third, or more, waves of outbreaks around here, I won’t be shocked.

I really hope not, though.

Weeks later, when things on the ol’ social calendar started to be crossed off due to coronavirus concerns, this was one of them. The G League suspended the season indefinitely on March 12. As of this writing, it has not resumed operations.  J and mine’s game was obviously not played.

I don’t know about you, but with life slowed down these days, looking into stuff more carefully has become a habit. A few weeks after the non-game, I found it odd that I hadn’t received any communication from Ticketmaster about a refund. I thought, from reading their policy before, that postponed/suspended events qualified for refunds. When I looked on Ticketmaster’s website at the time, however, the policy only referenced refunds for cancelled events.

I tried calling Ticketmaster for clarification, but after being on hold for a long time, I got disconnected. A quick look on the old Google machine, however, revealed that I wasn’t suffering from the Mandela Effect about  misremembering the refunds.  According to numerous articles, amidst the abundance of events being shelved because of the COVID-19 crisis, Ticketmaster quietly changed the wording of their policy. “Refunds are available if your event is postponed, rescheduled, or cancelled” apparently became “Refunds are available if your event is cancelled.”

Our non-game currently has a status of TBD, in terms of a date. 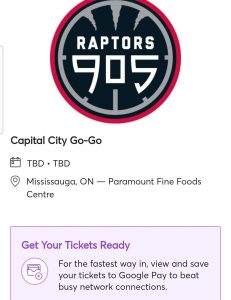 Since it hasn’t been cancelled (even though the likelihood of fan-attended games for any sport, any soon isn’t realistic), I’m out of luck for getting my $18.10 back. And look, I get it.

I’m sure that life at Ticketmaster the last few months must be pure chaos.  To their credit, due to the backlash, they have tweaked their refund policy. It kind of gives the event organizer more discretion in terms of giving refunds or not. So, in my case, I gotta wait on the G League to decide, as well.

While it’s only $18.10 for me, what if I had spent $181.10 per ticket, to see the Toronto Raptors play, and this was the case? What if I dropped $500 for concert tickets, only for the show to be rescheduled for an unknown date? What if, instead of working from home with kids, I  lost my job and needed the cash back? A lot of money is being held up right now by Ticketmaster. It’s understandable, given the uncertain economic climate….yet it still doesn’t seem right.

What does seem right, however, is wrapping this post up. Stay safe out there.  Until the next one, peace!