Milestones in Becoming A Dad

The other day,  a milestone event occurred in our household. And event so huge that it marked a giant step forward in my efforts in becoming a dad who’s great……

I had my first outing, in public, by myself, with the three kids!

I wish that I could tell you that this monumental occasion went off without a hitch.

However, I also wish that I could tell you that I won the lottery, and am buying you a Nintendo Switch, for being such a loyal reader.

Unfortunately, neither of these things are true.

The outing was an unmitigated disaster, for real. Whoever said that going from two kids to three kids was easy, clearly only had two kids. Becoming a dad of multiples only multiplied the parenting required disprortionately.

Lemme recap my night for you:

♠ The scene was B’s basketball practise, at an elementary school. The plan was that I would meet K and the kids there, after work. K would then take off, to do her thing.  We would switch cars, too, since we only have one vehicle that can hold all of us, a Dodge Journey.

KJ would sleep in his carrier the whole time, J would play on her tablet, B would ball out, and then I’d take the children home, when it was over, singing Kumbaya the whole way. Piece of cake!

♠ When I got to the practise, K told me that KJ had to be changed soon. Since he freaks out and gets hyped up whenever I change him, my simple plan of letting him sleep  the whole time was now a non-starter.

♠ After K left, J decided that she had to go potty….and that I had to come with her. She refused to go by herself.  I told her that I would wait by the door, while she went.

♠While waiting by the door, KJ started to fuss, so I had to  go over to him, to pick him up.

♠ I chatted with a friend, who wanted to hold KJ. After a while, I realized that J had been in the washroom for a long time.  When I went in to check on her, I found her standing under the air dryer, crying. She had an accident, before she made it to the toilet, and her pants were soaked. In the history of becoming a good dad moments, this was going to be a turning point.

♠ J said that there were extra pants in mommy’s car. Phew!

♠ Ever panic, and come up with an idea that seems smart at the time, but is stupid in retrospect? Now back in the washroom, I figured that I would try to dry J’s pants. Instead of taking them off, I scooped J up, groom-carrying-his-bride style, and held her under the air dryer. Pretty sure Mr. Bean is the only other person who trys to dry their pants so incompetently.

♠After doing this nonsense for five minutes, my friend, who still had KJ, walked in. Luckily, after seeing me struggling like an idiot with J, she took pity on me, and offered to let J wear an extra pair of her son’s shorts.

♠ Wearing over-sized basketball shorts was too big of a fashion faux pas for my four year old girl, though. She refused to put them on, because she was worried that people would stare at her. We argued, but eventually came to an agreement – she would wear the shorts, but she had to wear her winter coat (which I had to go back out and get) as well, and she had to hide her face in my shirt when we walked out (so she wouldn’t see the people staring at her). 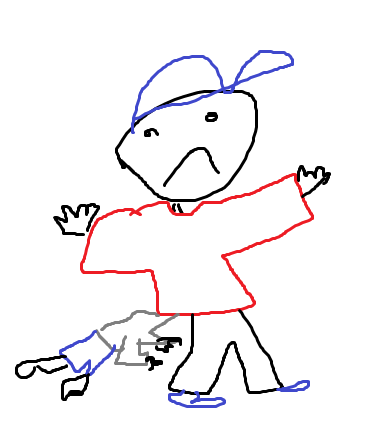 ♠ Back at the bleachers. I relieved my friend of her KJ duties. KJ had duty in his diaper, so I had to change him. Not wanting to do it in front of a crowd (because of the freaking out that I mentioned earlier), I went into the washroom again. Apparently, this elementary school didn’t have a pregnancy problem, as there weren’t any change tables. There weren’t any benches, either. I wandered around, and eventually ended up in some sort of lounge area.  I changed KJ on a picnic table.

♠ I made my way back to the bleachers, and grabbed a seat. J immediately hopped up on my lap. I ask J to sit somewhere else. More arguing ensued. Eventually, she agreed to sit in KJ’s carrier, where she remained for the rest of practise, watching her tablet. Yes, people stared at her.

♠ Words of wisdom – if you’re looking for a quiet place to put a baby to sleep, I do not recommend a basketball court with like 40 screaming child ballers on it.  KJ would doze, and then suddenly jolt up at the noise. I spent the time on the edge of my seat, hoping like heck that he didn’t start freaking out.

♠ Near the end of practise, B came over, bleeding.  He got hit in the mouth, and had a split lip.  He had to spend the rest of the time holding a cloth to his lip, soaking up blood.

♠ Don’t feel too bad for him, though.  Afterwards, as we walked out to the Journey, I opened the door, so he could climb in first, to the back. He immediately veered right, climbed to the front, and started to press a bunch of buttons.

He somehow turned on all of the interior lights. And of course, I couldn’t figure out how to turn them all off. After screwing around for a bit, I gave up, and drove home, with the inside of the car lit up brighter than a bar at closing time. No, we did not sing Kumbaya on the drive, either.

And there you go. My first attempt at an outing on my own sucked.

See, I used to be scared of doing stuff on my own with B and J, but I got over that, and things usually weren’t too bad.

Adding a baby into the mix, now, though?

I guess all I can say is that, eventually, things will get better, right?

7 thoughts on “Milestones in Becoming A Dad”