What Do You Mean? 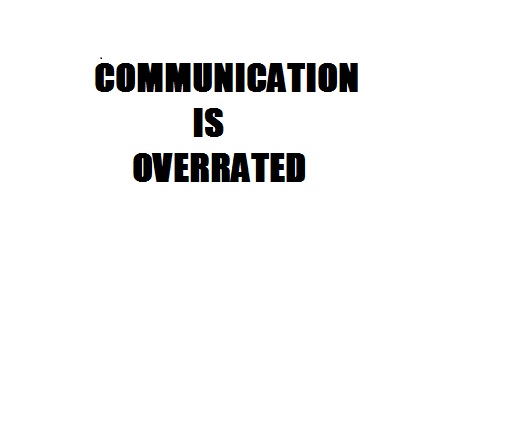 With my kids,  I’m realizing that you really can’t communicate enough!

Ever since B and J have been born, I’ve always forgone the baby talk, and instead spoken to them in the same way that I would to you. Now granted, this has resulted in many a blank stare when I’ve done things like try to explain why Kanye West is the greatest rapper of all time (OF ALL TIME).  However, the benefit of this approach has been, if I have to ask B and J to do something, I usually don’t have to dumb it down too much, for them to understand it.

B and J are still very young. It’s not like they understand everything.  So, yeah, on occasion, if I’m not crystal clear in my communication, things go awry. Horribly, terribly awry.

Lemme give you some examples!

The intended outcome: B would learn an important lesson in moderation.

The real outcome: B had the most delicious feet in the world.

We went out to eat at a restaurant. After dessert, B wanted some chocolates that were in K’s purse. I said no. He had had enough treats that day and he’d have to wait until tomorrow. After the restaurant, we had make a stop at a store. When we went to get B out of the car, we noticed that his feet had brown goop on them. Luckily, it wasn’t the usual brown substance that ends up on your shoes.  What he had done was put the chocolates in his socks, and they melted (#shocker).

B – “Well, you said I could have them tomorrow, but I didn’t have any pockets, so I put them in my socks?”

What went wrong: I should have said that you can have chocolates tomorrow…..but I’ll hold onto them, not you. 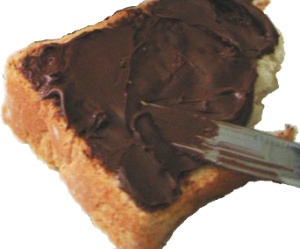 And then after, we took the gunk on his socks and spread it on some toast. Wait, what?

The intended outcome: An opportunity to apply some newly gained knowledge

The real outcome:  I got hustled, yo.

While passing a snack shack. B asked for a sour key candy. He had been learning about money in kindergarten, so I figured it was a good chance  for a real life math lesson. The keys were 50 cents each. I gave him a dollar, and asked him to find out how much change he would get back. He took the dollar then gleefully skipped over to the shack. From a distance, I could see him talking for a bit to the clerk. He handed his money over, and the clerk gave him a friggin’ Ring Pop. B excitedly ran back over to me:

Me – “Where’s my money? What happened to the sour key?”

What went wrong:  I should have clarified that he wasn’t allowed to upgrade his candy selection at a higher cost. 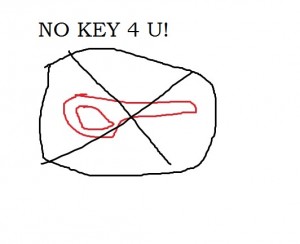 The real outcome:  Five uncomfortable minutes for me.

While driving, J had to go potty, so I stopped at a Tim Horton’s.  She needs help getting onto toilets, which means I have to help her with that. Timmy’s didn’t have a family/unisex washroom, so I walked towards the men’s room. J refused to go in, because she’s a girl. I tried in vain to clearly explain why I couldn’t go in the women’s room, but no dice. Eventually, she ran in the women’s room, into a stall. I panicked, ran in after her and closed the stall door. The last thing that I needed at that moment was for a woman to come in.

So, naturally, a woman came in.

The last thing I needed was for the woman to really need to go, for fear that she would hear some creepy dude beside her and call the police.

So, naturally, she really had to go.

Don’t worry, J took her sweet time. She happily talked to herself, tinkling away, while I stood deathly silent, nervously sweating profusely. After five painful minutes, the woman started to finish up. J then hopped down, too. A feeling of dread went over me, as I figured my gig was up . J then grabbed some toilet paper and made up ‘The Wiping Song.’ I finally caught a break, as The Wiping Song dragged on, while the woman washed up and left. No blood-curdling screams. No yelling “Get outta here, you pervert!” No cop calls. Nothing.

We bounced out of there immediately afterwards.

What went wrong: We should have never potty trained J. 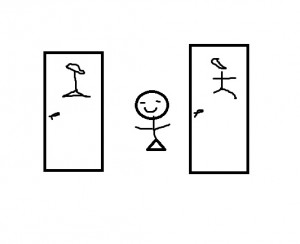 The intended outcome: A fun day here and there, with mommy.

J told me that she was going to “Erin’s house with mommy”. This was odd, as I thought that they were hitting up Home Depot, along with a few other stores.   I didn’t know who Erin was, either. I asked K about it. After a minute, we realized the misunderstanding.

Me – “You’re not going to Erin’s. You’re running errands! Like, you’re going to go do stuff.”

(long silence while J digested this information. Then):

I explained again, and she seemed to get it. Yet, later that night, when I was putting her to bed,  I asked how her day was. She started to pout.

What went wrong:   Next time, use a synonym for errands which doesn’t sound like a person’s name. 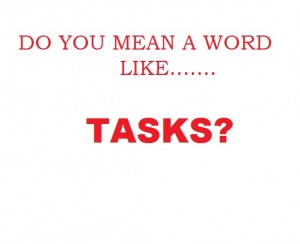 The intended outcome: Putting my foot down, and showing B who’s boss!

The real outcome: B had the most delicious hair in the world.

A couple of years ago, it was supposed to be an uneventful dinner. B had another thing on his mind, however:

A few minutes later, I looked over at him. He had smeared applesauce in his hair.

Me – “You’re not having a bath tonight!”

B nibbled away on his food for a bit, then suddenly took his plate and dumped it all over his head.

Giving in and giving him a bath at that point would have probably lead to daily dinner dumps in the future, right?  I decided to hang tough:

Me – “You’re not having a bath tonight!”

We still didn’t clean him.

Calling our bluff, B started wiping applesauce from his hair and eating it:

B – “Can I have some more applesauce?”

A quick wipedown then straight to bed for his antics.

What went wrong:  The whole incident could have been avoided……if I told him beforehand that applesauce is not a very good shampoo. 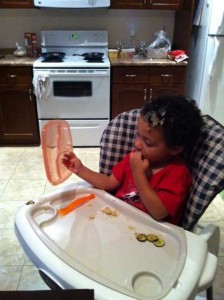 Anyway, I think that you get the idea.

When talking to kids, it’s always best to be clear as day, not clear as mud.  Or, uh, applesauce.