We The North, He The Mouth 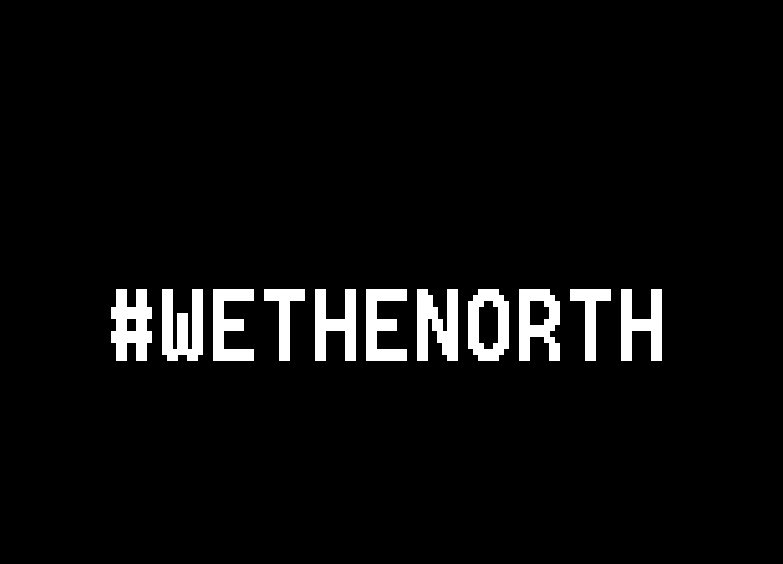 This post goes out to hoopsheads everywhere, and their little hoopsheads! We The North, baby!

Now, for as long as I can remember, I’ve been a basketball fan. I  was never much of a player, but I sure could watch a mean game of ball. Anyway, since my kids were little, I’ve been looking forward to the day when I could share my enjoyment of hoops with them. Luckily for me, that day came sooner than anticipated.

B’s six years old, and he’s turned into quite the little baller. If he’s not playing basketball, then he’s talking about it, especially all things NBA related.  While that part has been “like father, like son,” I’ve also realized that his perspective on the game is sometimes not like mine at all.

Because they’re the local team, I’ve watched many Toronto Raptors games with my buddies over the years, either on TV or in person. We have a beer or two, cheer the Raps on, talk some trash, and shoot the breeze about whatever. Good times.

When I watch games with B, though, it’s still good times,  but the discussions are….

Not bad, of course. Just random. The mind of small kid is a scary place, for real.

Here, let me give you an example. Game Two of the NBA playoffs. Toronto Raptors versus Miami Heat. Myself, B and our stuffed Raptors mascot…… 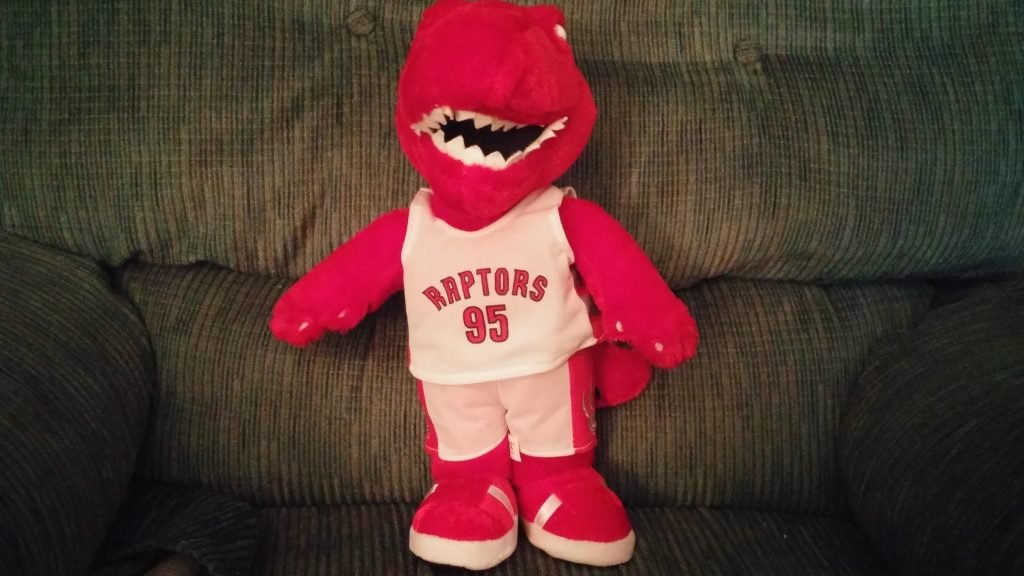 settle in to catch the action. The following conversations took place:

⊕ B thinks that I am like Human Google, and if I don’t have an answer, then actual Google knows all. When told that one of the commentators, Alvin Williams, used to play in the NBA, B wanted to know how many buzzer beaters he made.  Not surprisingly, this stat is hard to find. If anyone knows the answer, please let me know.

⊕  During the pre-game introductions:

I’m at a loss for words, as I’ve never thought about Erik Spoelstra’s heritage before.

⊕ A few months ago,  I made the mistake of telling B that my least favorite NBA player was Joe Johnson (What? He’s a Raptor killer). Every time Johnson got the ball during the game, B cheered wildly, to spite me.

B – “Has Norman Powell played against every team?”

*At this point, I called an audible. Rather than spending the next several minutes cross-referencing Norman freakin’ Powell’s game log, I recanted my prior answer.*

Me – “Wait! He has played against every team!”

I figured that would be it. But B had one more, head-scratching question:

B – “What time did he play Golden State at? What minutes?”

⊕ With about a minute and a half left in the first quarter, B started to get excited about possibly seeing his favorite play – a buzzer beater. He started chanting “Buzzer beater!” As the clock counted down, he added a weird, nasaly, Russian accent to his chant. Alas, no buzzer beater was made.

⊕  If you’re like me, you and your friends have probably discussed which players your favorite team should trade for. Fantasy general managing. B and I took a stab at it:

B – “Golden State should trade Steph Curry for Jonas Valančiūnas.”

Me – “That trade would never happen. Golden State would want more for their best player.”

Me – “No. They would want a lot more. Like a team’s best player, or a bunch of really good players.”

B – “Oh. They should trade Steph Curry for Kobe Bryant.”

Me – “Why would they want someone who’s retired?”

I couldn’t argue that one.

⊕  Later, the game showed a person in the crowd holding a sign which read  ‘Be Yourself, Lowry.’

⊕ Even though the game was close, he went upstairs to his room, to shoot hoops on his mini net. He eventually wandered back down at halftime. He had two questions – was there a buzzer beater, and who took the last shot that wasn’t a buzzer beater.

⊕   Demarre Carroll dribbled to the basket, and nailed a layup.
Me – “Wow. Carroll usually just hits jump shots. He never drives.”
B –  “Yes he does! He has to drive.”
Me – “What do you mean?”
B – “Well, how does he get to games? He needs to drive a car to them!”
Once again, I couldn’t argue that.
⊕  As the third quarter rolled on, B was getting argumentative, which is usually a sign that he is tired. We debated the number of Canadian teams in the NHL playoffs, and whether Jose Bautista of the Toronto Blue Jays pronounced his name “Joe’s”. He then started listing his favorite Boston Celtics in order (side note: he really likes the Celtics. No clue why. I scored a couple of tickets to a meaningless Raps-Celts game this season. When I told B that I wanted to take him, he was over the moon, no sleep for days thrilled. I doubt that there was a more excited person at the Air Canada Centre during that game than him). I got caught up watching the action and didn’t notice that he was quiet. When I looked over, I found him like this: 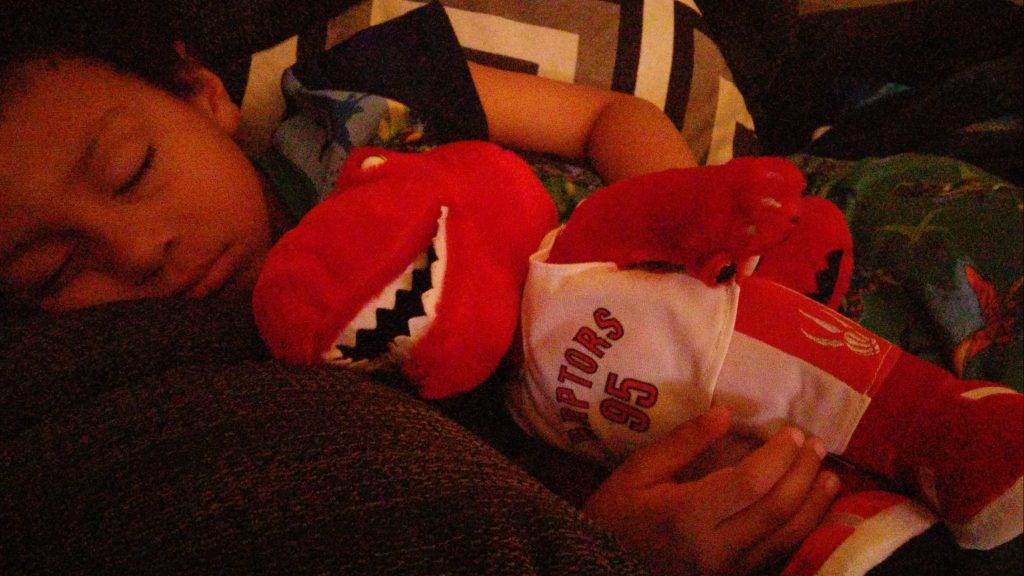 And like that, it was wrap on the game for him.
See what I mean, though? Whether watching hoops with your buddies or with your kids, it’s always interesting, but in different ways.
Later, all.

4 thoughts on “We The North, He The Mouth”