Trapped In A Closet With Fake Newz Around The Corner

Three quick posts for the price of one today, dawg. Let’s go!

TRAPPED IN A CLOSET 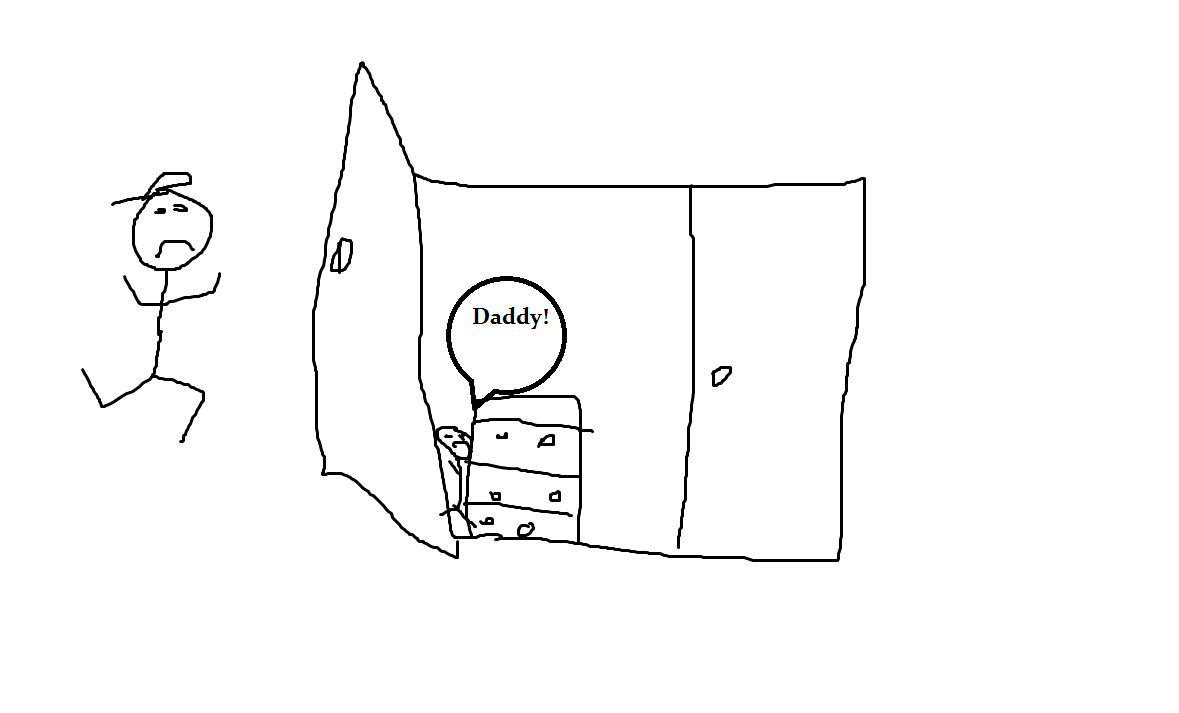 A while ago, lil KJ outgrew his crib, so we upgraded him to his own bed. For the most part,  it’s been alright.  Sometimes, though, I miss the containment of the crib. Take the other night, for example.

I had put him down to sleep, which was a laborious, time-consuming process. About an hour later, I heard his door open.  He happily came bouncing down the stairs, fresh as a daisy.

The increase in bed freedom has led to an increase in late night wandering.  He usually comes to our room later, though.  Why he was up so early now, no clue. Regardless, I took him back to his room, and he was out within minutes.

I had promised J that I would crash in her bed (that’s a whole ‘nother story), so that’s where I ended up. At around 3AM, I was awakened to KJ screaming for me, and crying.  In theory, I should have just gotten up, but I was barely conscious, so I yelled for him to come to me. I must have dozed off, because, the next thing that I know, I heard KJ frantically yelling for me, plus a lot of indecipherable, two year old toddler gibberish (“Daddy, lkfjk$ajfuebt! Daddy!”).  I had to get up now. I stumbled around upstairs, in the dark, trying to find where the yells were coming from. It was like the sorriest game of Marco Polo ever. Eventually, I realized that the screaming was coming from B’s room.

See, B has a dresser in his closet, with a  gap between it and the wall. The gap is roomy enough for me to stand there, for example, but I’m too big to easily wedge myself into it. KJ,  presumably in his hunt for me, in the dark, decided that I must have been in that gap.

He got himself into it, but then couldn’t get back out, and started freaking.  I saw him, lifted him up, and as soon as I did, he calmed down. Fresh as a daisy, he then said ‘Oh, hi daddy!’ as if he was surprised to see me.

Legit, I think that, with R. Kelly making headlines, I had been reading a lot about him and his music lately. KJ must have been secretly reading along with me, too. Otherwise I don’t think that I’ll ever understand why he was trapped in a closet.

Speaking of big new stories, the Momo Challenge was a huge deal recently. As parents, K and I had the same sense of moral panic that you probably did, which meant that we had to confront what our kids were consuming on social media head-on. It’s crazy how impressionable a child’s mind is.

Take J, for instance. In her six year old eyes, a heavy set toy delivery man in a red suit, magic reindeers, unicorns and giant, chocolate-dropping bunnies are all very important to her. Shoot, for a minute, so was a ghost-hunting Elvis Presley.

Knowing this, a few weeks ago, J casually asked me the following:

I was slightly distracted, so I said of course it was real, without hesitation. Real live humans, posting real stuff. In retrospect, this was not the greatest idea.  YouTube is reality, but there’s also a lot of phoney bologna which can fool a naive young brain.  Later on, we had this conversation:

J – “Daddy, I’m scared of the Bad Elf.” ( J loves the Elf On A Shelf, and takes the whole thing very seriously. In turn, I have to treat it seriously.  Imagine her dismay when she came across some dastardly video, of elves behaving badly and ruining Christmas for kids).

Me – “The Bad Elf isn’t real. You have nothing to be scared of.”

Despite my attempts to explain myself, she was worried about this creepy little jerk for weeks afterwards.

Another time, while out for dinner, J  casually told us that she had been watching the news.  This was odd, as current events isn’t really her thing. She continued on by discussing how mermaids existed, and where you could go to find them.  Believe it or not, she didn’t see this on CNN. It was some random YouTube news channel. Fake newz at its finest, which I had to explain to her.

I guess what I’m trying to say is, despite the Momo Challenge being (most likely) a hoax, the idea of the Momo Challenge was terrifying, because of how easy it could be real.  In my house, anyway, it doesn’t always take much to sway one of my kids.

Speaking of my house, I’d like to think it’s a pretty typical home. I still shake my head at the stuff that takes place in it, though. ‘Round every corner lies a possible surprise.

One night, I turned a corner and almost stepped on J. Instead of going to sleep as asked, she stubbornly put together a makeshift bed in her doorway, and slept there. I mean, based on the amount of effort that this would have taken, it would have been easier and more comfy to just to lie in her regular bed, but what do I know?

KJ was calling me here, on two phones (he drips too hard, as the kids say).  They’re actually a calculator and a broken walkie talkie. The reception on those things is horrible. 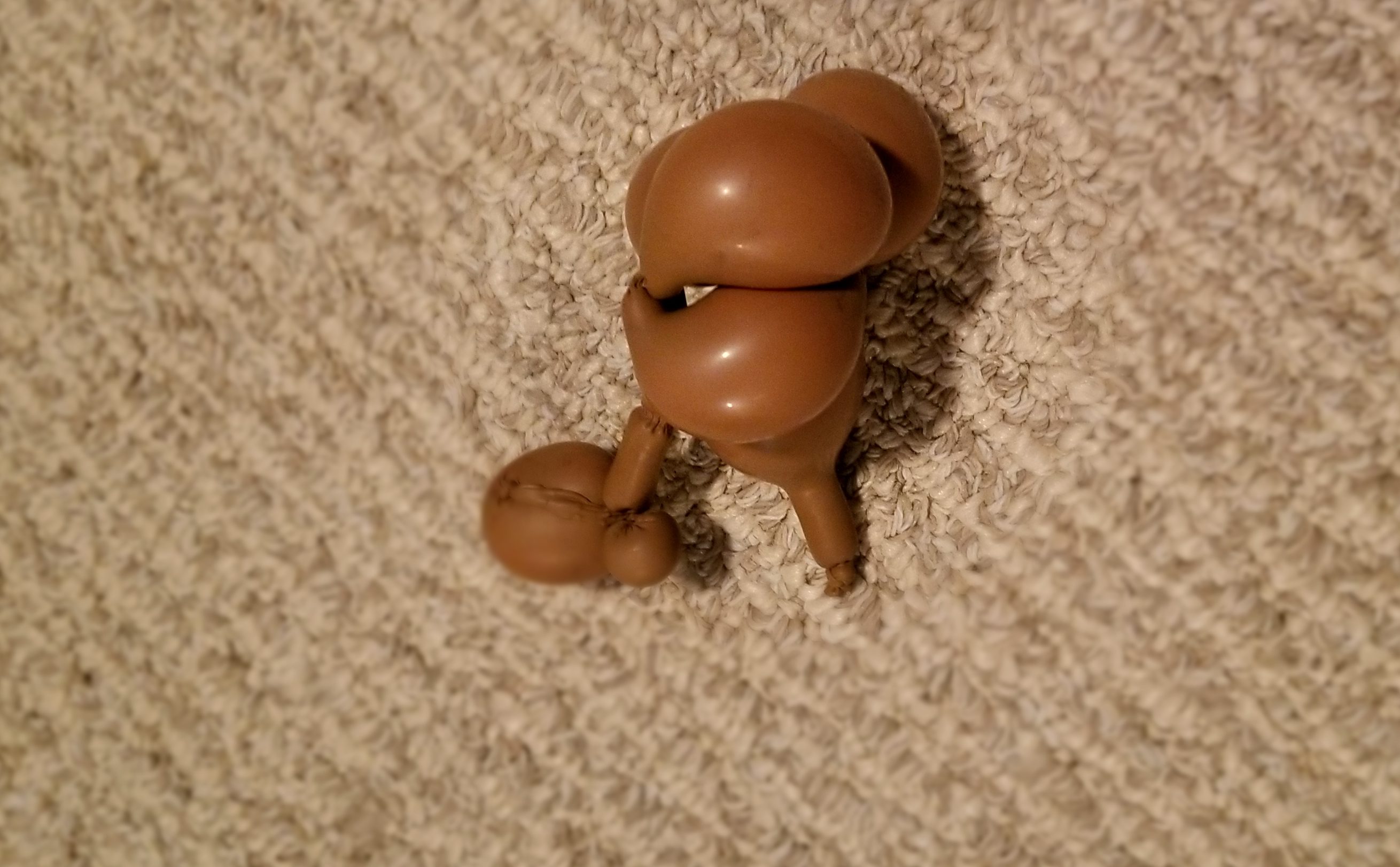 On first glance, I was grossed out when I entered B’s room and almost stepped on this. Luckily, it’s just a brown deflated balloon.

B wasn’t home when I walked into his room to see this, so you can imagine my reaction.  Luckily, it wasn’t some sort of bizarre, inappropriate class project. I found out later that he had an audition, and was practising some lines.

J decided to play dress up. Here she is, as Marshmello, the famous DJ. Curse you, Fortnite.

KJ was walking around eating and drinking. He then pulled a toddler David Blaine. I looked, and his snack had vanished. I finally found it here,  down low, on a shoe rack. I’ve heard of waffle shoes before, but this is ridiculousness!

Anyway, you get the idea. You just never know what to expect, with kids.

One thing that I do know, however…..is that this post is over. Later, y’all.