My kids, they work hard, and they play hard. Sometimes, to the point that they exhaust themselves mid-play and pass out. I call those times the TKO (Toddler Knock Out). I don’t get it. Like if I’m tired and cooking, I don’t fall asleep on the oven.  If I’m sleepy while playing baseball, I don’t collapse on third base.

Anyway, here are some TKO examples: 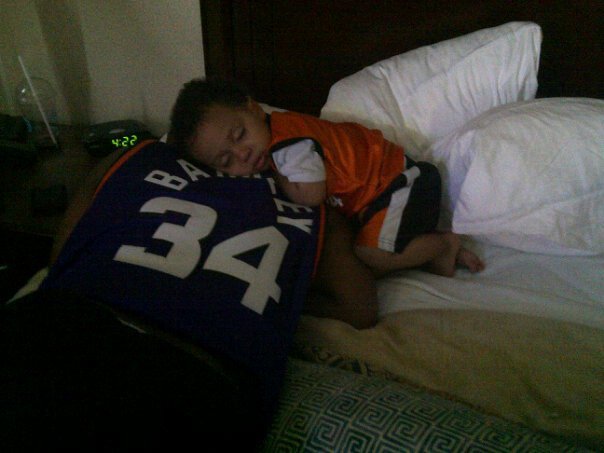 Why did B decide, on a perfectly good bed, that my head would be a comfy pillow to rest on? No clue. Why are we napping at 4:22PM, too? Yeah, no clue either, 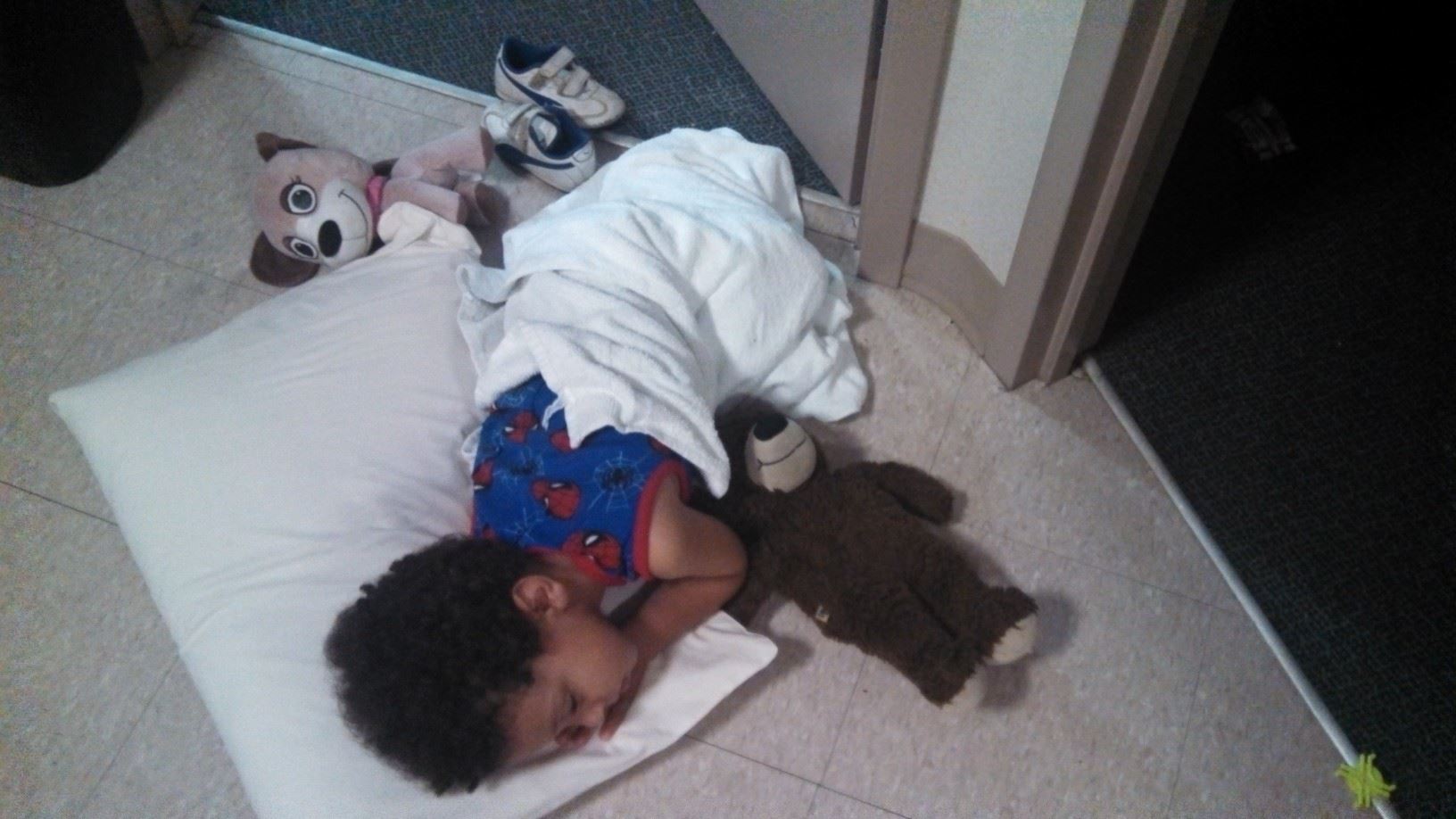 Now this TKO made a lot of sense. This was when the fam was living in a college dorm room (that’s a whole ‘nother post). B decided that night, that he didn’t like his bed, and refused to sleep in it. K and me knew that he was in the hall watching our TV from there, instead of staying in his room. He was whiny for a while, and then he was quiet. We checked on him and found him like this. See? Clearly, he grabbed his pillow, and hit the tiles to relax. The tiles were cold, so he grabbed a towel to keep warm. He needed some company, to watch TV with him, so he also got a couple of stuffed animals. And his shoes…..yeah, I got nothing, I’m making it up. This didn’t make sense then, doesn’t make now. 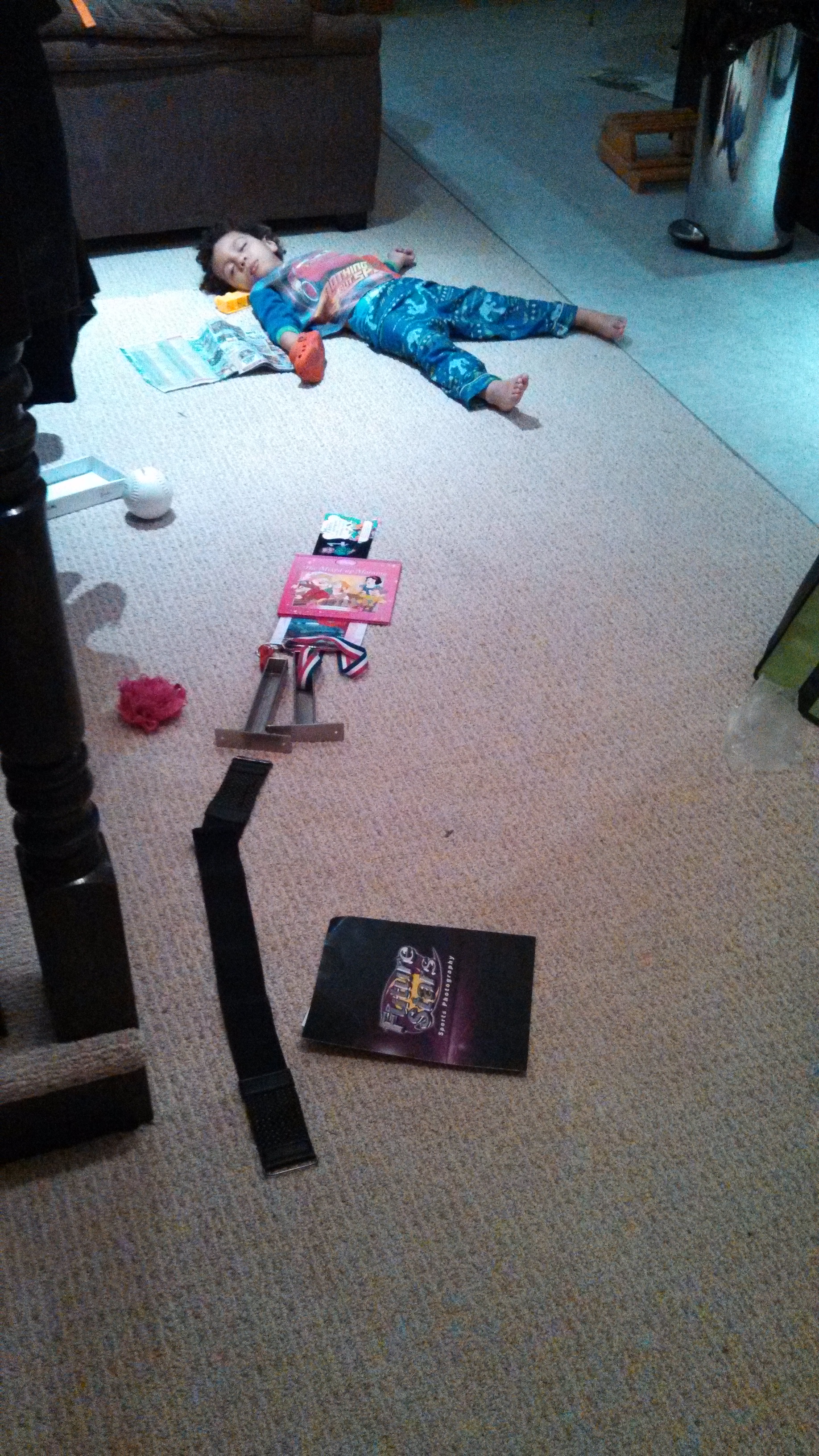 Now for this one, B again didn’t want to go to bed (shocker!) and was being difficult about it. Again, we ignored his whines. All of his toys were put away, so we figured that he’d just get bored and go back to his room to read. Not so much. When it comes to entertaining himself, lil dude is like MacGyver/MacGruber, in his resourcefulness. We heard him talking to himself for a bit, and then silence, and then we found him as he is in the picture. What’s with the random objects lined up so meticulously, you wonder? I asked him the next morning what that was all about. He told me that he was bowling. The black belt thing was the bowling lane, the softball his ball, and the other things were the pins.  The sandals on his hands were his bowling shoes. Lil Twinkletoes said that he ran out of breath while playing and had to go to sleep, whatever that means.

TKOs……I don’t get it. And I’m sure, when you see them with your kids, you don’t get them either.