Tips For Attending a Professional Golf Tournament With Kids

Admittedly, I am not a golf fan. However, I’ve watched PGA and LPGA tournaments on TV before, and always thought that it would be cool to attend one in person.  So, when the good folks at the RBC Canadian Open offered me a ticket to check out their event, I was all over it like Rory McIlory on a par 4 hole. Not only that, but I took my seven year old daughter J, who isn’t a golf fan at all, with me. I know, I know, this sounds like a bad idea, but we both actually had a good time! Here are my tips for attending a professional golf tournament with kids.

At the RBC Canadian Open,  I misunderstood the prohibited items list, and didn’t bring any food or drinks, so I had to buy all that stuff there.  It was a hot day, and J loves her snacks, so my wallet ended up taking a nice hit. There was also hours of interactive, kid friendly scheduled activities on site, but these didn’t happen on the day that we went. We knew, walking-wise, that we were going to get our steps in, but we both didn’t realize how ‘hilly’ the course was, which made things more physically demanding than expected, especially on J’s little legs. Also, between the walking and the heat, we had to stay hydrated. Places to grab a drink were scattered around the course, so being aware of where they were was important. Basically, as golf tournament novices, planning ahead was crucial. Knowing the schedule, course layout, and policies ahead of time can save you some disappointment and money later.

I have no clue what the parking situations are like for every professional golf tournament, but they probably all vary. So, along the lines of planning, be sure to look into it ahead of time. It might be on site, you might have to buy passes beforehand, who knows. In our case at the RBC Canadian Open, we paid to park at a nearby fairgrounds, and took a shuttle bus to the course.  In case you were wondering, yes, J enjoyed the bus rides almost as much as the golfing.

HAVE  A GAME PLAN

There are a few ways to maximize your experience when you attend a golf tournament with kids. If you and your child have a favorite golfer, you could find out when they tee off, and follow them during their round. For the less ambitious, bring chairs,  plop yourselves down at a hole, and watch the entire field come through, so you see a wide range of golfers. If you guys are all about dat social media life, find out which holes or areas are famous/infamous, and hit them up, for Insta-worthy, ‘Gram-able pictures. If you don’t have a vested interest in any of the golfers or the course, like J and I, check to see if the event has a family /fun zone of some sort.  We spent a while hanging out in the “Hamilton Fare Way” area, near the 18th hole, eating, playing mini putt and cornhole, and loading up on free swag.  We also went to the RBC Canadian Open early, as I figured the crowds wouldn’t be as bad then as in the afternoon, when the big name PGA dudes teed off.  We did eventually wander around the course for a few holes, before heading back the Fare Way area (it was pretty entertaining, there, what can I say).

TO QUOTE ALLEN IVERSON – “WE TALKING ABOUT PRACTISE, MAN”

If the course of the golf tournament that you are attending has them and allows it, make time to stop by the driving range and putting greens. 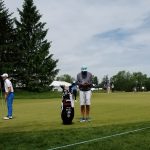 You can see the pros up close, practising. It’s also a decent opportunity to possibly even score an autograph or selfie, if you’re nice about it.

Speaking of autographs, that’s another way to keep your kid engaged, while at a golf tournament. Besides the practise area, the 9th or 18th holes, where rounds end, are also usually primo locations to score someone’s John Hancock. 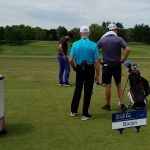 For J and I, this wasn’t that appealing (as we didn’t know who most of the golfers were), BUT we did overhear security talking about  Kyle Lowry of the Toronto Raptors possibly coming to the RBC Canadian Open that afternoon.

Since he is her favorite player, we did figure out where the entrance was, and hung out there for a bit, in the hopes of getting his autograph (no luck on this, by the way).

Attending a professional golf tournament is unlike any other big time sporting event, as golf has certain etiquette which needs to be adhered to. You’ll have to keep your kid in the loop on this stuff. Even as spectators, you should probably dress a certain way, to look the part (though, because our experience at the RBC Canadian Open coincided with the Raptors’ NBA Finals run, there were a ton of people rocking Raptors shirts and jerseys, instead of fancy polos).  You also can’t move at certain times, when the golfers are in action. You have to know when to be quiet, as well, which is important if your kid is a chatterbox like J.  Don’t forget to tell them that if you see a ball, it’s not finders keepers. While strolling down a hole, we heard someone yell “WATCH OUT!” (unrelated sidenote: shouldn’t he have yelled “FORE!”?). Turns out, a golfer hit an errant tee shot which soared out of bounds and came flying down maybe 15 feet in front of us. J saw where it landed, said ‘Hey look! A  ball!’, and immediately ran to get it, which caused me to sprint after her, to tell her not to touch it.

And finally, the most important tip of all, for attending a professional golf tournament with your kid…..

Seriously, it’s a cool experience, and a nice way to spend some quality time together. Enjoy it! 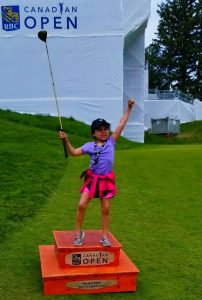 https://daddyrealness.com/ View more posts from this author
« How To Attend A Championship Parade
Why Reclining Seats Are Trouble »