This Is Awesome! WWE Smackdown LIVE in Toronto!

AWWWW,  Smackdown Live, don’t you dare be sour! There really is nothing like watching wrestling live, especially when it’s a World Wrestling Entertainment (WWE) show. Having been to a few cards in my life, I can honestly say that they put on a good show, and the events that transpire during them are always interesting, to say the least. Such was the case of the most recent one that we went to,  Smackdown Live, at the recently renamed Scotiabank Arena in Toronto.

In a bit of a swerve, my guests for the night were B and one of his friends, who’s a hardcore fan. My perspective on the WWE obviously differs from theirs (mine probably leans more to the “smark” side), so I was curious to see what their reactions would be like. 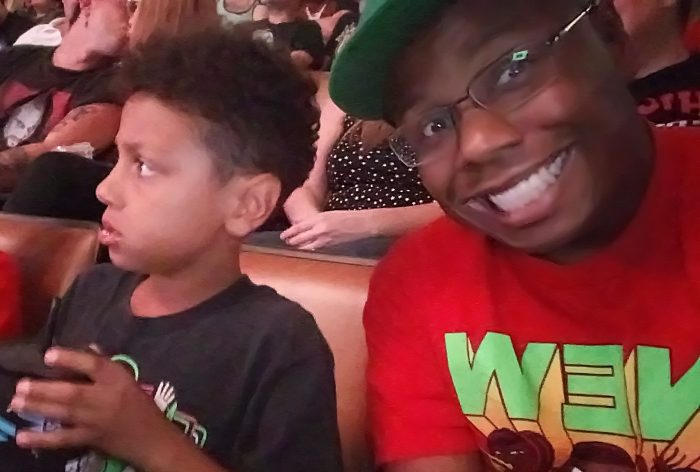 B has gone to houseshows before, but not to a TV taping. The main differences are the lighting (much brighter) and the breaks in the action (much more frequent, due to commercials).  During the breaks, videos were shown, though, to keep the crowd into things. Not that the crowd needed much help staying involved. The atmosphere was very energetic and loud, which was contagious. It’s hard not to scream “Yes!” and point along with Daniel Bryan, when 15,000 or so people are doing the same thing! 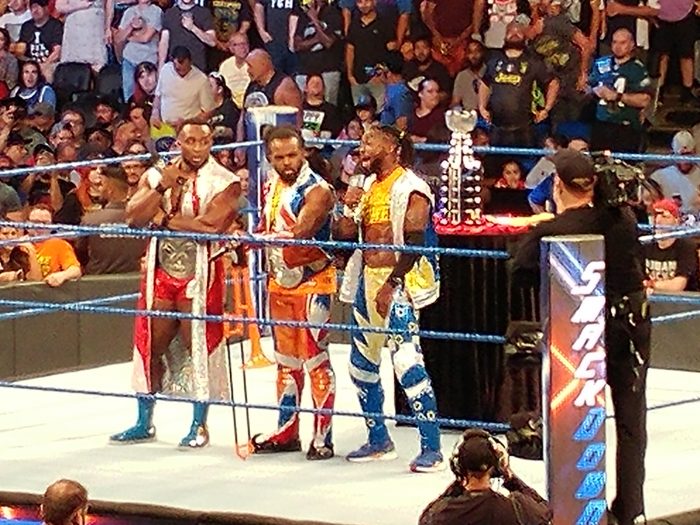 Among my group, the boys were most excited to see the New Day (B), and Randy Orton and AJ Styles (his friend) in action. While the New Day started off the show, Orton and Styles were saved for the non-televised main event, which didn’t happen until after another show took place, 205 Live.

In all honesty, if the kids hadn’t been looking forward to the main event (Orton and Samoa Joe versus AJ Styles and Jeff Hardy), I probably would have left after Smackdown finished, as I’m not that into 205 Live (I can only watch so much wrestling in a week). However, I’m glad that we stayed, as 205 Live was great. The boys thought Hideo Itami beating up a local enhancement talent was hilarious. While we all were initially meh about the Kalisto/Buddy Murphy match that followed, the two tore the roof off and had an incredible encounter! By the end, all three of us were chanting “This Is Awesome!” with everyone else there. 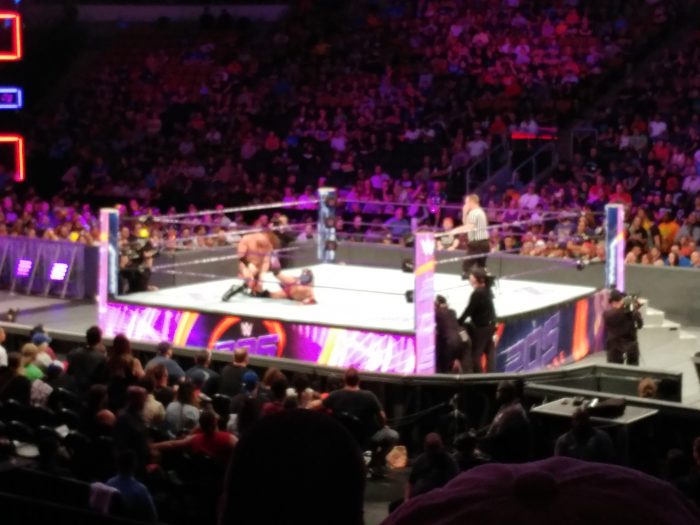 The main event also didn’t disappoint. The four stars did all of their greatest hits (or signature and finishers moves, as my video game playing young guests called them). The good guys won, too. They celebrated with the fans for a long time after, to send the crowd home happy.

Speaking of that, by far the most popular wrestler that night…..was a bad guy. Becky Lynch had ‘turned heel’ a few weeks before, by turning on her best friend, Charlotte Flair. The problem (I think) is that Becky was pretty justified in being mad. Or, at least in the minds of many of the WWE fans, she is. So instead of hating her, people seem to be liking her more and rallying behind her. I don’t think this is what the WWE intended with this story.

At the end of Smackdown, after Charlotte retained her championships in a match with Carmella, Becky ran out and attacked her. Normally this results in boos from the crowd. On this night, though, the place went bananas. The “pop” or reaction or whatever was huge, and the chants for Becky were deafening.  B and his friend were a bit confused by this, and I legit had trouble explaining why the person who is supposed to be hated had the arena going crazy for them. Like I said, it’s always an interesting time when you see a show live!

Three more observations then I’ll wrap this up. 1) Our seats were behind former WWE referee Jimmy Korderas.  Really nice guy, and was cool to the steady stream of people who came up to him. 2) The merchandise available wasn’t that impressive. There was a lot of stuff for Raw superstars who weren’t even there. Also, t-shirts were $35. However, they kept showing promos during breaks that said you could buy shirts online that night for $10. Needless to say, we didn’t buy any merchandise. 3) In terms of kid demographics, besides the New Day, Styles, and Orton, as mentioned, B and his buddy were most into Samoa Joe (so good at being bad that he’s hard not to cheer for, if that makes sense), Daniel Bryan, and R-Truth.

All in all, it was a phenomenal night. Two solid hours of Smackdown Live, followed by an entertaining 205 Live, and a crowd-pleasing main event.  The boys that I was with weren’t the only kids that I saw there who left with big smiles on their faces!

Note: The good folks at WWE hooked me up with tickets to the show. Opinions and thoughts expressed are 100% mine.