The other day, we welcomed another member into the Daddy Realness family.  Our baby boy KJ was born! If I do say so myself, he’s a pretty chill, happy lil dude. 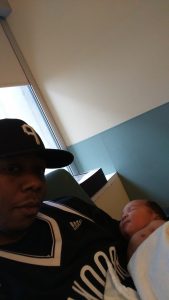 Now, like his siblings B and J,  KJ was brought out of K by a C section procedure.  Coincidentally, as one of the world’s preeminent dad bloggers, a subject which I am constantly asked about is that of Caesarean sections.

Nothing in that sentence is remotely true. However,  as someone who’s seen three of them, I figured that I can at least tell you what C sections are like, from a dad’s perspective. Consider this post about things a dad should know about pregnancy.

Check out this timeline of events, for KJ’s birth:

3:30AM: Wakeup time. K’s surgery is for 8:00AM, but we were told to be at the hospital at 5:00AM, for prep stuff.  Because the hospital’s parking garage had flooded the night before, we wanted to get there early, in case the parking situation was  still a mess. We got dressed, said bye to K’s mom (who was sleeping over to take B and J to school that morning), grabbed K’s hospital bag, and hit the road.

4:50AM:  We checked in at the labour ward. While there, we were told that the hospital’s paperwork said that the C section was scheduled for 9:30AM, not 8:00. It had been switched without our knowledge! With no other choice but to accept the error, we were sent to a room, to wait.

During this period, I killed time by eating breakfast (K was not allowed to eat until after the surgery) and watching Jane The Virgin on Netflix. K played games on her phone and rested. We were both given hospital gowns/scrubs to change into. We also received frequent visitors. Nurses, doctors, the OBGYN and people doing studies all came by (shout out to the one nurse that was assigned to us and stayed until we left the recovery room later. She was amazing). K was heavily monitored, and had a bunch of tests done on her and the baby.  We also learned that, because of the messed up parking situation, the anesthesiologist was late, so we wouldn’t be going in at 9:30AM after all.

9:50AM: The nurse came in to tell us that we would be going in soon. She gave K a nasty-tasting medicine drink to chug, and told her to pretend that it was tequila. After a few more minutes of waiting, we were off to the surgery room.

10:10AM: Scratch that. K was off to the surgery room. The thing with being the significant other of someone going in for a planned C section is that you’re pretty much there for moral support only. Just be cool, stay out of the way and let your partner and the staff do their thing. The hospital that we were at didn’t even let me in the surgery room immediately with K.

And you know what? That’s all good in my books.

I’d most likely freak out and barf or faint or something, listening to the nurses slicing K up. Tending to me clearly is not staying out of the staff’s way.

Anyway, I was told to wait in the hall, and eventually I would be called into the room, after the C section procedure was well underway. During this time, I did what any bored husband would do – took sexy selfies of myself in scrubs! 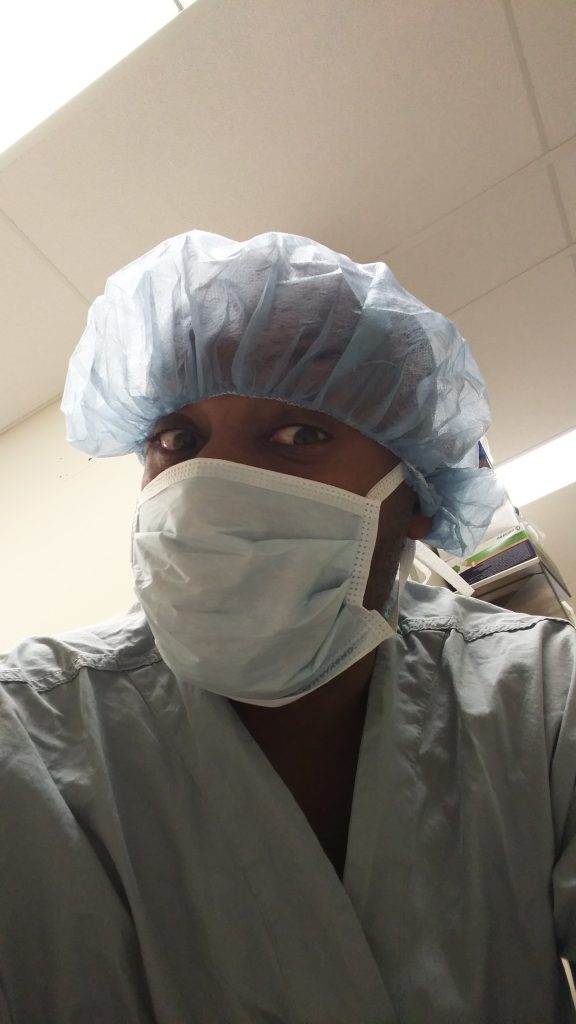 10:30AM: Yours truly was called in. During a C section, your partner lies on a table, arms spread out. By the time that you get there, a  big curtain was put up by their chest, so they/you can’t see what’s going on.  On this day, I entered the room on the wrong side of the table, though. Maybe you’re into seeing your spouses insides on the outside, but not me. Sticking to the routine that I did during our previous two births,  I power walked to the stool the nurses had for me (near K’s head) with my eyes closed.

I remember thinking during K’s first C section that it kind of sounded like a construction site, with all the buzzing and whirring. KJ’s was more serene, however. Besides the odd squishy noise, there wasn’t too much to make you squeamish.

10:40AM: Remember what I said about not getting in the way? I thought K was turning red and blue, which I blurted out to the nurses. This of course made K scared, which is the last thing you want during a surgery.

The nurses calmly reassured us that nothing was out of the ordinary. K turning bluer than Violet Beauregard (word to Charlie And the Chocolate Factory!) was apparently no biggie.

10:50AM:  After some final pulling, KJ enters the world! He showed off an impressive set of lungs, too, screaming his little face off as he exited the womb. I  then got to have some fun. I snapped pictures of KJ, incorrectly guessed his weight when the nurse put him on the scale, cut the umbilical cord (note: it’s rubbery and bloody), and held him for the first time. While the doctors worked on putting K back to together, I sat with KJ by her.  We were both feeling relieved. A healthy child really is a miracle, and having a third C section successfully isn’t exactly a walk in the park. 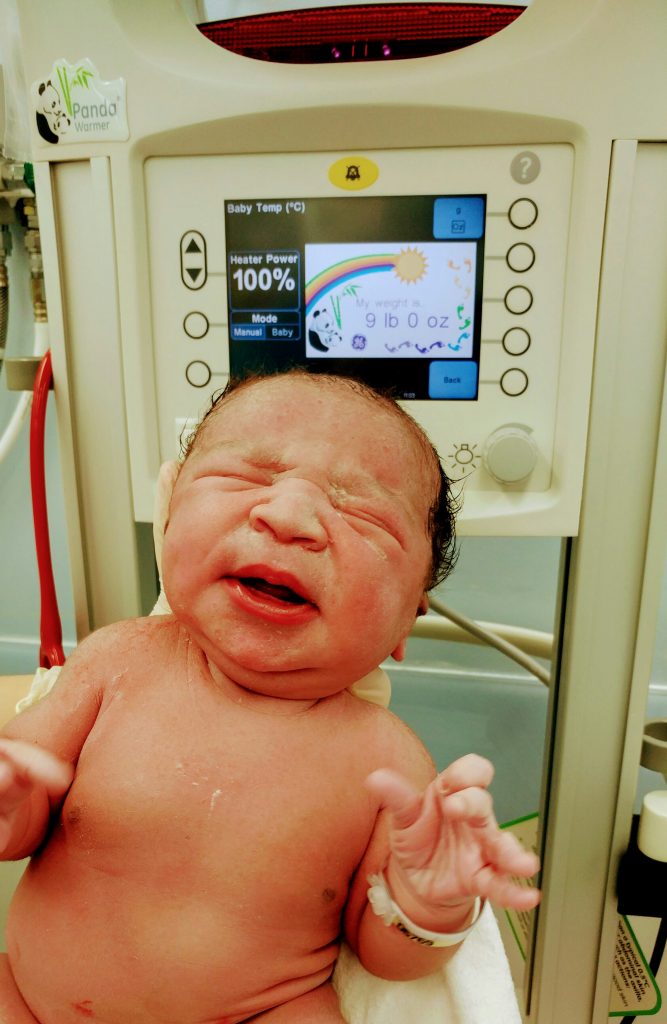 For real, though, I was kicked out of the room, and told go wait in recovery, while they put the final touches on closing up K. I was also allowed to change out of my scrubs, though. The nurses wheeled K and KJ into the recovery room about 15 minutes later.  Over the next while, it was a blur of tests and visits again. K was finally able to get to hold our son during this time. KJ got to experience the joys of breast milk for the first time, too.

1:00PM: We were on the move again. For the remainder of the stay, we would be in a hospital room. In our case,  it was a private room, as opposed to a semi-private one (so more space, no roommates, and our own bathroom).  The surgery really took its toll on K, as she was in a lot of pain. I tried to tend to her and KJ as best I could, when the nurses weren’t around.

4:00PM:  B and J arrived, to raise all kinds of chaos, and to meet their lil bro for the first time! 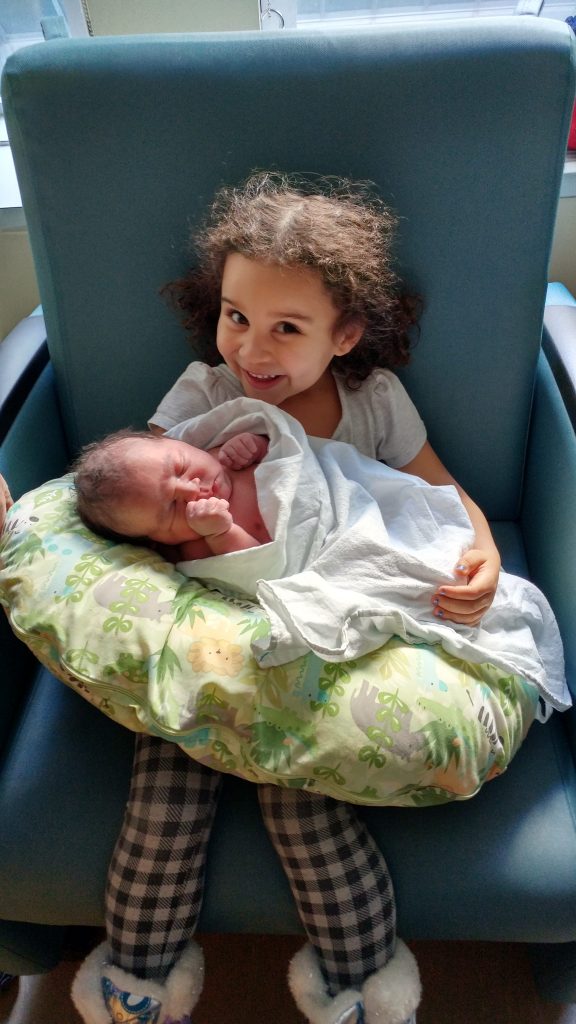 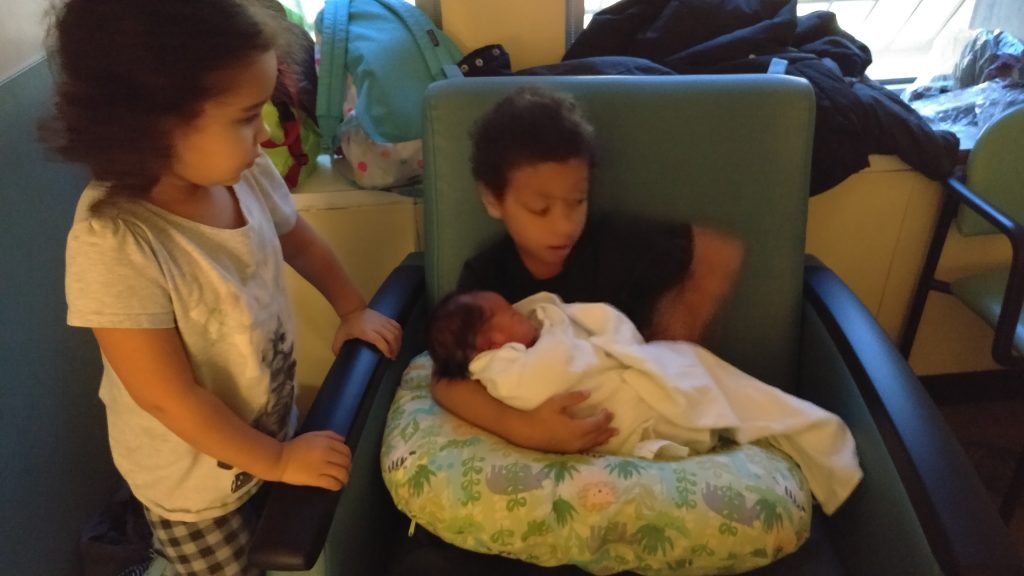 7:00PM: As much as I would have loved to stay the night, reality didn’t allow it. B and J had school the next day, and overnight babysitters on a weeknight are a rare commodity. I had to leave, to take the kids home. I know one nurse did kind of throw shade our way about this, which made me feel guilty. If our situation was different, of course I would have hung around. Regardless, K and KJ were in great hands at the hospital,  I would be back the next morning, and after a long, exhausting day, I looked forward to a good night’s sleep in my own bed.

11:00PM: However, before that good night’s sleep, I had one more daddy duty. Tis the season for elves on the shelves. When we got home from the hospital, B and J decided that day, of all days, to write letters to our elf, which I had to help them with.  J was concerned about if she was going to get Shopkins for Christmas; B  wondered about Pokemon cards, and the elf’s magic powers.

The thing was, they expected the elf to write them back! They knew my handwriting, so I had to think outside the box. When they eventually fell asleep, I thought about it, and ended up thinking inside the box (of Cheerios, that is): 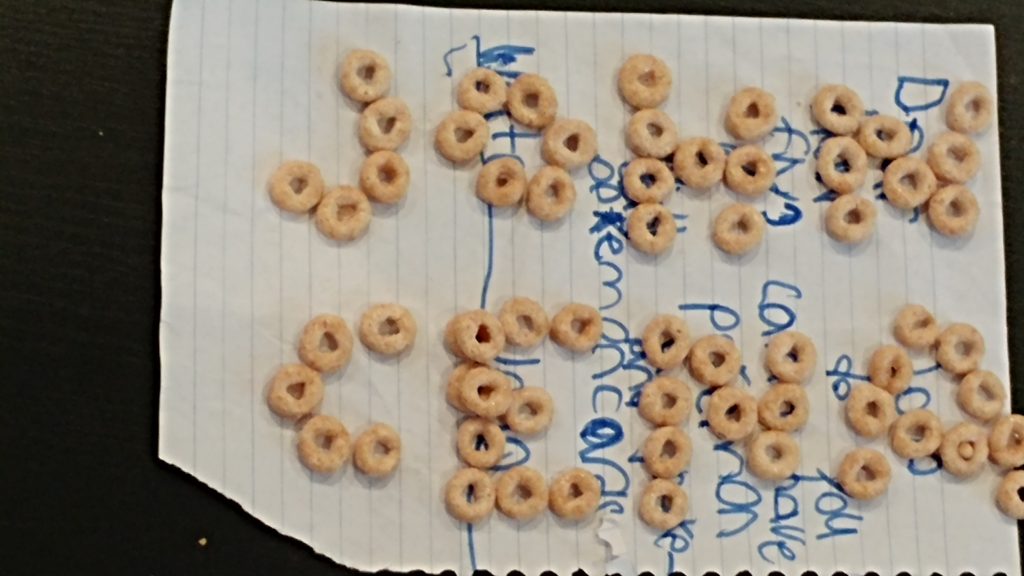 Yes, the elf gave them the unexpected John Cena treatment.  I jammed that cheeky, meme-loving elf in the box of Cheerios, too, for dramatic effect.

Like I said, it was a long day. Also,  I’m clearly not very creative when it comes to elves on the shelves.

Afterwards, I hit the sack, to put a wrap on this long, incredible day.

And that’s what a C section is like from dad’s viewpoint. If you don’t know, now you know.

Until next time, later y’all!