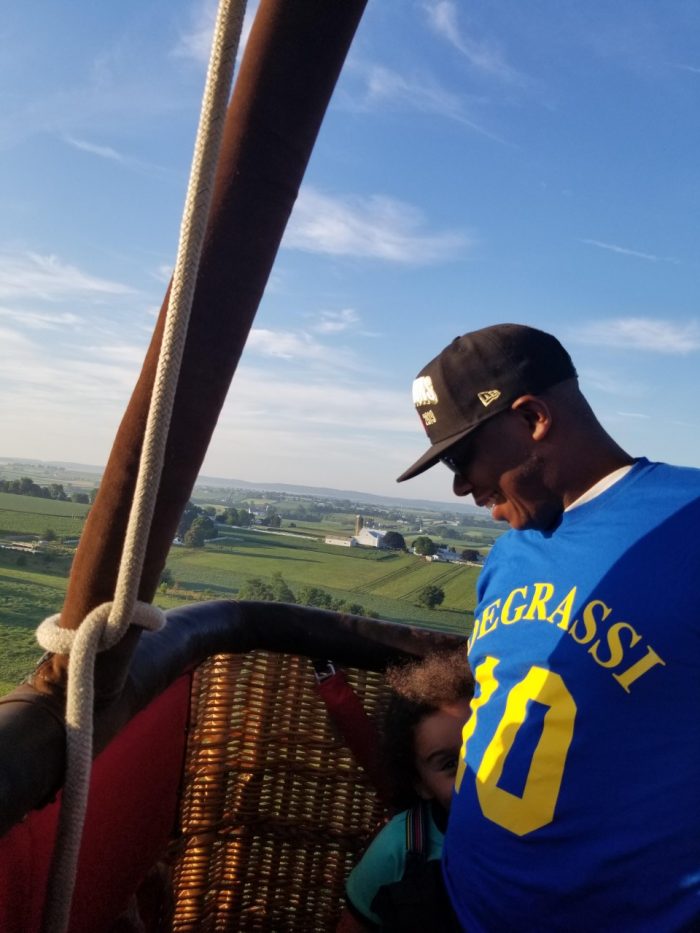 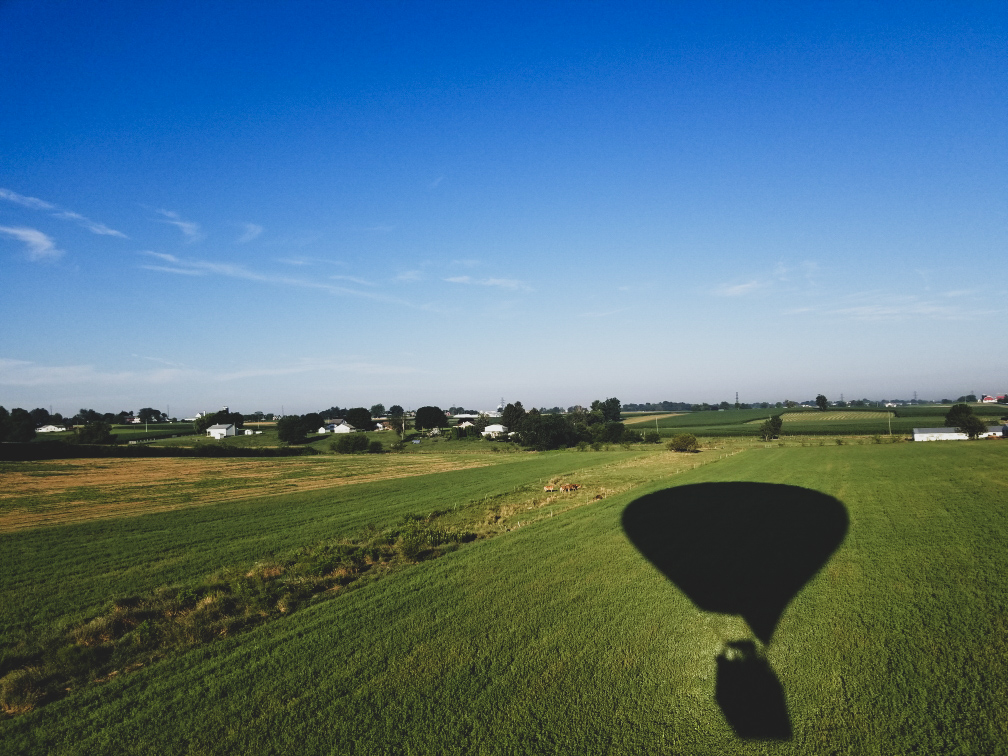 Greetings, fly guys and fly girls! If you ever considered going on a hot air balloon ride, but don’t know what you’re getting into, then you’ve come to the right spot.  Last summer, my daughter and I took flight in a hot air balloon, compliments of my friends at the US Hot Air Balloon Team. Boy, let me tell me you, the experience was something else! And as a certified balloonatic (OK, not really), I figure that gives me enough credibility (this is probably wrong, too)  to debunk myths and spit hot truths about  hot air balloon rides.

Ever notice that you’ve never looked up in sky during lunchtime in the summer, and seen a hot air balloon floating by? Me neither, but there is a reason for that.  A hot air balloon ride is very susceptible to weather, and can only fly in the most stable of  conditions. For scientific and technical reasons beyond my pay grade, this happens to be before dawn or occasionally at dusk.

For J and I, this meant taking a 45 minute long Uber ride at 4:30AM from our hotel to the heart of Amish country in Pennsylvania, Bird In Hand. We had to arrive by 5:30AM, at the US Hot Air Balloon Team’s headquarters. If you’ve ever wanted to wake roosters up, instead of vice versa, I highly recommend taking early morning hot air balloon rides. Also, to give you an idea of the high volatility/subjectivity of ballooning, ours was a shared flight, with two long-time friends, and an older couple. This was the older couple’s sixth attempt at trying to take a hot air balloon ride, as every other time that they tried, it ended up being cancelled because of the weather. Talk about your hardcore balloonatics! 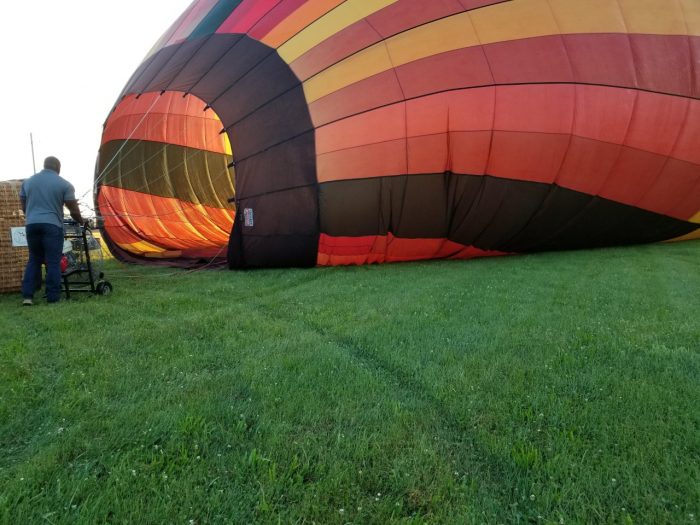 Unlike an airplane, hot air balloons do not need an airport to depart from. After we arrived at the headquarters, we were then transported via white van to the launch point, which was just an open field. The van’s driver and navigator also doubled as set up and take down crew. Most interesting, though, is that the van was a chase vehicle. While in the air, the van followed the balloon around, until it landed.  Watching this lonely white vehicle on the empty roads from high in the sky,  kind of made me feel like a journalist in a chopper following OJ Simpson’s Bronco. Kind of.

At the launch point,  the crew setup the hot air balloon, which was much larger in person (like, small building-sized) and inflate it. I then realized that the basket, which was also larger in person (the size of a small car, and about chest level high) didn’t have a door. So how the heck do you get in it, you ask?

The older couple weren’t especially agile, for lack of a better term, especially the wife. They thought that the basket would be on its side, and that they would get in, sit on the bottom, and wait for the inflated balloon to  pull it upright.

This wasn’t the case, though.

The crew are there to assist, but for the most part, you’re on your own, to enter the basket. In the couple’s case, the crew gently helped lift the wife up, and over, the edge of it. In the husband’s case, he climbed in on his own, with some struggle. When it came to J’s case, I gave her a boost and dropped her in, since the basket was too high for her to climb  on her own. In my case, I tried to clear the edge by leaping over it, like how this guy jumped over the wrestling ropes. Spoiler alert: my leap was U-G-L-Y, and I ain’t got no alibi:

THE SOUND OF SILENCE

Once you’re in, there is nowhere to go but up. For real, when in flight, the experience of hot air balloon rides is as breathtaking as you probably imagine it to be. Our US Hot Air Balloon ride was over miles of farmland in Amish country.  Picturesque views of the Pennsylvania landscape stretched as far as the eye could see.  The world seems so different when you’re gliding through the sky, thousands of feet in the air. Surprisingly, it was very quiet. Besides the chit chat of those on board, the only sound was the hissing of the burners. At one point, we could hear dogs barking below! 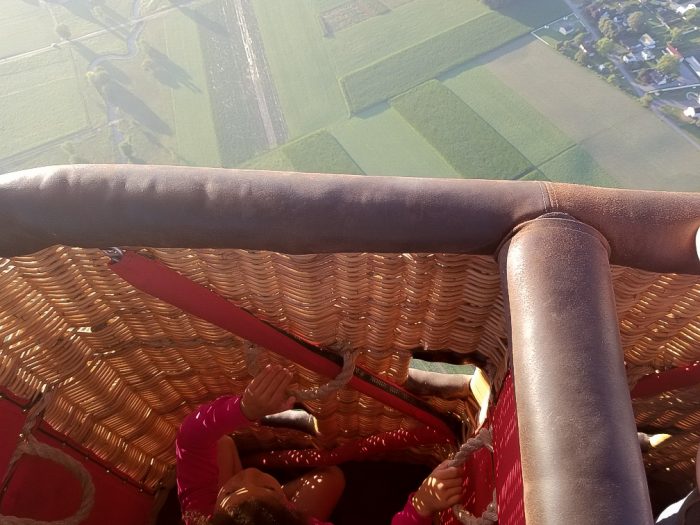 BE PREPARED FOR A CRASH LANDING

Unlike planes, hot air balloons don’t just land on a runway. In our case, the pilots pointed out a spot in an open field that looked land-able, called down to the chase vehicle to see if it was OK or not, and after receiving affirmation, started the descent. They actually missed the spot, then had to re-ascend, and get the chase vehicle to confirm another location.

Unlike planes, hot air balloons don’t have wheels, to roll into a gentle landing. They literally just crash into the ground. Now depending on how skilled your pilot is, the crash landing varies in gentleness. In our case, it knocked me off of my feet (word to Stevie Wonder!), because I didn’t have time to brace myself, and J  went tumbling into the side of the basket.

This was considered a good landing.

Once on the ground, you don’t just leave the balloon, and take off in the chase vehicle. Everything needs to be packed up, too. One of the dudes in the crew was jacked (re: very muscular), and he had the job of doing most of the heavy lifting (fun fact: a deflated hot air balloon still weighs a lot).  I tried to help where I could, as well, though. We happened to be in an Amish family’s farm, so they all came out, too see what all the commotion was. I’m sure the scene was quite the culture shock to them! Once the van was loaded up, we headed back to the headquarters, where we celebrated our save travels with the traditional balloonist champagne toast. J had orange juice, by the way, so stop wagging your fingers, people.

The answer is….I think so? I mean, it is a pretty outdated mode of transportation.  When you’re planning a trip on Google Maps, a balloon is never an option for the fastest way there. It’s all for pleasure and enjoyment now, based on skills and techniques developed over centuries of balloon aviation.

Whereas, for example, people a long time ago stopped riding those bikes with the giant wheels, because of how dangerous they were, ballooning remains a popular past time today. If they weren’t suitable, they wouldn’t still be a “thing”, right? The accident rates online seem to support hot air balloons as being fairly safe, too.

J couldn’t peak over the edge unless I lifted her up, so there was no concern of the basket rocking, if that’s what you’re thinking (or at least that’s what I was thinking, after watching that episode of Family Matters recently, where Steve Urkel and Carl go up in a hot air balloon, and that’s what happens to Carl). The basket’s floor was sturdy, too. So, to me, as someone who is pretty cautious, somewhat afraid of heights, and flying with a child, I didn’t feel like we were in any real danger….except during the landing, as mentioned.

All in all, hot air balloon rides, while not for everyone, are a really cool experience.  I’d recommend them anyone looking to book a flight with their kids, if they’re up for it.

Until the next one, you balloonatics,  peace! 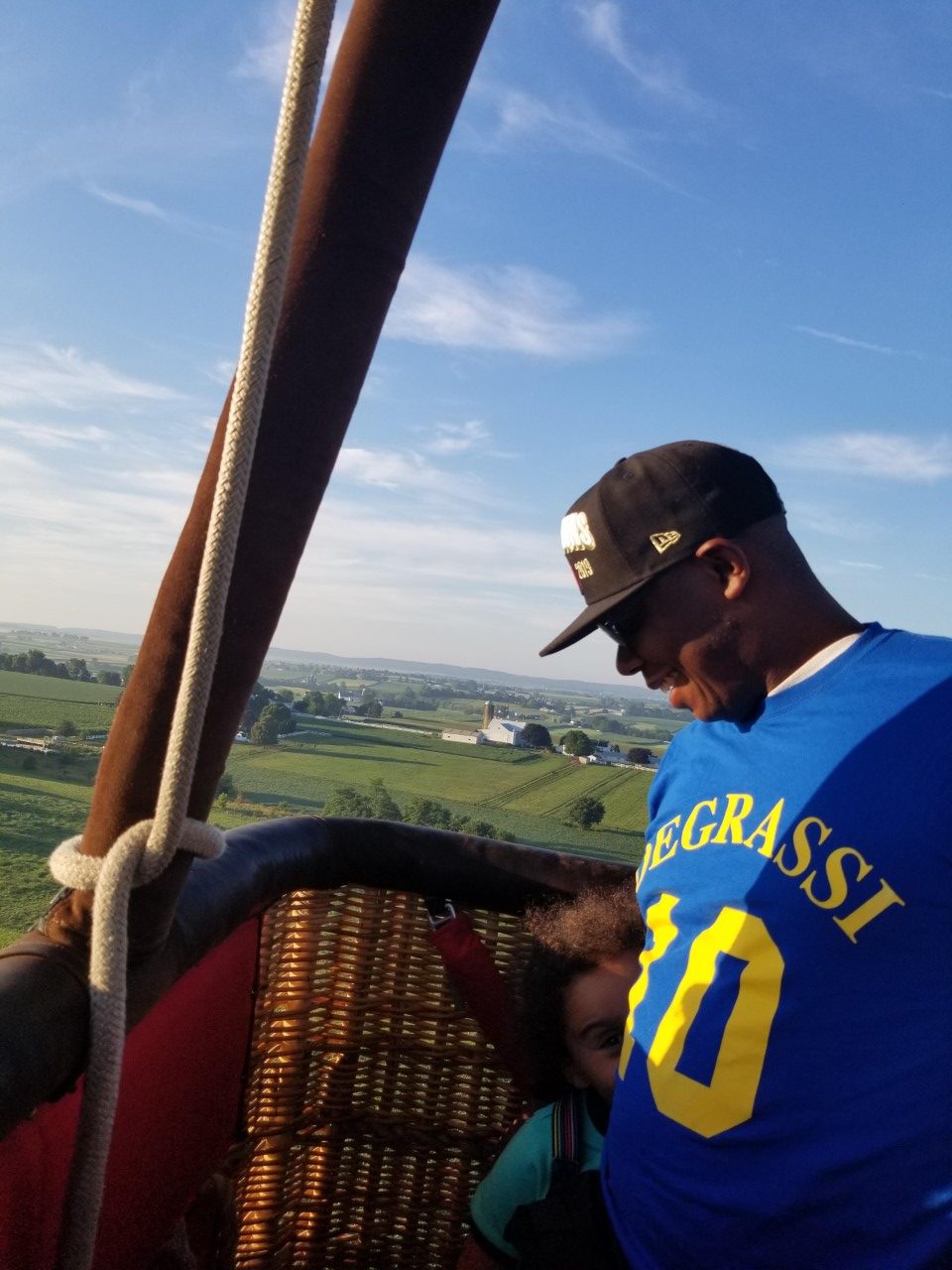 Disclaimer: we received a complimentary flight from US Hot Air Balloon Team while on a press trip in Hershey, PA. All opinions expressed are mine, as always.