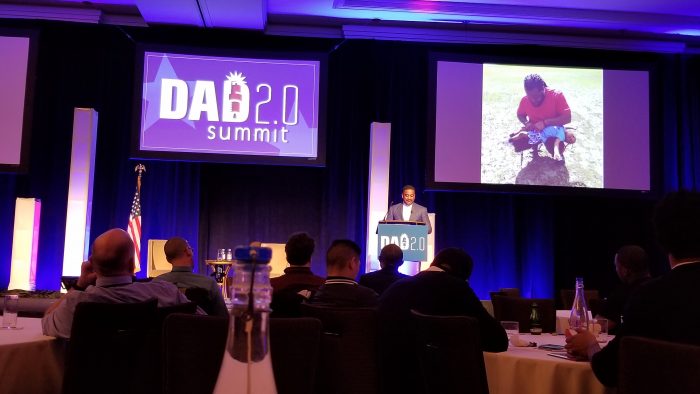 The first time that I attended a Dad 2.0 Summit, 2017 in San Diego, I wrote about ‘the push’ of going to it. I recently went to my second Dad 2.0 Summit, in Washington, D.C.  This time, I would describe the experience as more of a pull, than a push.

For the uninformed, the Dad 2.0 Summit, per their own words, is  an open conversation about the commercial power of dads online, and an opportunity to learn the tools and tactics used by influential bloggers to create high-quality content, build personal brands, and develop business ideas.  Since I started blogging way back in 2013 (!!), I’ve watched, mostly from afar with a keen eye, this annual conference grow and evolve.

In 2017, I was fortunate enough to be given an Oren Miller Scholarship, to help offset some of the travel costs, as well as being selected to be a featured Porchlight Post reader. Both of these spells of good luck pushed me into attending, where I then spent most of my time at the conference feeling overwhelmed and nervous. Looking back, I regretted not soaking in more of what was presented. I did still somehow walk out of there with a newfound sense of excitement in myself, this whole Daddy Realness thing, and my parenting abilities. It was as if my imaginary cup was full. Full of hope, knowledge, opportunity, connections and pride.

Several unattended Summits later, I realized that I missed that feeling. It was as if my cup was empty.  As such, this urge to refill it, as well as having a better game plan to take advantage of the Summit’s offerings, is what pulled me into going to Washington for three days. Well, two and a half days actually, by the time that I got to the venue (The Mandarin Oriental Hotel), because of numerous flight cancellations and delays, but you get the idea.

While Dad 2.0 has evolved, one thing that remains the same is that it really brings together the dad blogger/content creator/inlfluencer community. I think that the main appeal for many attendees is being able to reconnect in person with their online friends once a year.  People who aren’t into the scene as much anymore, because their kids are older, still come to see their buddies, for example.

While I am a part of the community….I’m a small, not very vocal part. Also, the conference ran Thursday-Saturday, with the Thursday mostly being a day for networking, especially for new attendees; I was only there Friday afternoon-Sunday.  I immediately felt a bit like an outsider.

I don’t say this to scare you off from attending, or to make you pity da fool. I did find a roommate (which I highly recommend doing, if you go), and we were lucky enough to be upgraded to a suite at the Mandarin Oriental. A luxury suite in a luxury hotel is as fancy as you’re probably imagining it to be, trust me.

Also, the community is very open and accepting. Lack of photo evidence aside, I did hang out with LOTS of cool, fascinating people. From dads just starting out their blogs, to dads with blue checks next to their names on social media. From men and women without blogs, to YouTubers with hundreds of thousands of followers. From podcasters looking to take things to the next level, to next level, esteemed, award-winning writers.  My best example of this acceptance was on Friday night. While walking around by myself looking for a cash bar (long story), I stumbled upon a group of Jewish attendees celebrating the start of Shabbat, and remembering the late, beloved dad blogger Oren Miller with prayer. Instead of telling me to leave, they explained what was going on, and invited me to stay, which I happily did.

This meetup took place before Dad Voices, a popular event where people read a piece of their work before an appreciate audience. I read one  of my typical irreverent posts. Some guys chose to go the funny route. A lot of guys, though, read personal, vulnerable ones. Laughs were shared, but more tears were shed. Between that, and the earlier Shabbat celebration, it was an emotional night, to say the least.

Besides the bonding,  Dad 2.0 is also about the bizness, with lots of opportunities provided to listen to, and engage in, all facets of it. I tried to soak in as much information as I could, as it really was invaluable. There were many workshops, sessions, and speakers covering stuff like the numerous technical sides of blogging, improving brand relationships, and coping with substance abuse.  One of the most well-received featured speakers this year, Donte Palmer, discussed how an incident where he had to squat in a men’s washroom to change his child’s diaper went viral, and led to him creating the Squat For Change initiative.  It’s crazy that one day, you’re just a regular dude struggling with a diaper, and the next day, you’re breaking down all kinds of barriers, leading a nationwide movement!

Along those lines, several of the brands in attendance were also looking for “dadvocates” to help lead their own movements, like Dove Men + Care advocating paid paternity leave, and Responsibility.Org striving to eliminate drunk driving. I remember, years ago, the Dad 2.0 folks were highly motivated in trying to change the bumbling/absentee father stereotypes often seen in the media. While there is still work to be done on that front, it’s cool to see the shift in the thinking to issues on a grander scale.

At the closing reception, the founders of Dad 2.0 announced that they would be holding smaller, frequent, more focused gatherings in the future, starting with  Los Angeles in October. I don’t know when, if ever, I’ll be pulled into attending one of these again. I do know that, as I walked out of the Mandarin Oriental Sunday morning to start my journey home, my cup wasn’t just full.