The Finish Line – Dealing With The Death Of A Parent

“They say the death of a loved one remind you of yourself, don’t it? Knowing you could be next at any given moment.” – Keith Murray, Child Of The Streets

My mom passed away a couple of days ago, and it’s something which has not fully set in with me yet.  I don’t know if it ever will. The idea of someone who has always just been there for me, no longer being there, is surreal. I spent a good chunk of today gutting her place. As we went through her stuff, so many good memories came flooding back. I can’t believe that there will be no new memories with her.

Let me back things up a bit.

My mom had to be admitted to the hospital in January, because of a myriad of ailments. Eventually, after numerous tests and scans, I received a call at work from a doctor at the hospital, saying that they had some news about my mom’s health, but it had to be told in person.  When I arrived, the doctor and his staff dropped the bombshell on us – my mom had incurable liver cancer. My mom, who was normally a stoic, cool cat, burst into tears upon hearing this news. At the time,  between that death sentence shocker, and my mom’s uncharacteristic reaction, I thought it was the worst moment of my life.

But here’s the thing with cancer – it sucks huge.

As bad as that moment was, over the next nine months, there were so many other equally awful ones. She put up a hell of a fight til the end, but cancer wiped her out, and deteriorated her to the point that she was a shell of her former self.

She spent months taking chemotherapy, usually with me by her side (god bless the nurses who work in those places, by the way. The range of people getting treatment, in age and stages of cancer, made me numb just watching. I don’t know how the staff in the chemo ward we were at constantly maintained such a sunny disposition). Once her chemo sessions ended, she had to have follow up testing.

The cancer in her liver hadn’t gotten any worse…..but it had spread to her bones, and brain.

From there, it got to the point where her bones were too weak for her to stand for an extended period of time, which made it unsafe for her to be by herself at home. So it was back to the hospital, but this time, in the long term care section.  After more testing, we once again received a call from a doctor saying that they had some news for us which had to be given in person.  The news was terrible – there was nothing else that could be done, and my mom only had a couple of months to live.

This was three weeks ago, by the way, so clearly the prognostication was a bit off.

My mom passed away peacefully and suddenly in her sleep. I went to the hospice that she was at the night before she died, and had a normal, uneventful visit.  I’m feeling a lot of stuff right now, but guilt is at the top of the list. If I had known that the finish line was so near for her, I would have stayed by her side all night.

I should have stayed with her.

She was a pretty active woman, too, man. Shoot, I remember in January, she came over and played basketball with B. Then, less than a year later, she couldn’t walk or speak coherently on a consistent basis, because of the stupid cancer which ravaged her body.

If you or a loved one have ever dealt with this disease, then you know my story isn’t unique.

If you haven’t dealt with it, then consider yourself blessed.

This website is basically a keepsake for my kids to read in the future. Hopefully a future that is cancer-free). I’m going to wrap this up by saying something to them:

B and J, your grandma loved you guys more than anything in the world. Even though you didn’t get to spend a lot of years with her, the moments that she spent with you meant everything to her.

Always tell your parents that you love them. You never know when they might not be around to hear it. 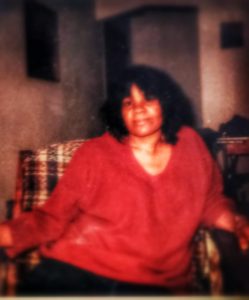