The Choice Is Yours (You Can Go with This, Or You Can Go With That)

Independent thinking is an important trait that should be ingrained early on. So as a parent, you try to mix things up. You know, instead of just telling them what they want, or what they should do, you give your kid some options and let them decide on their own. Then if their decision sucks, they learn to do better next time, hopefully. You have to be careful, however. Kids are tricky like that, so there’s always a chance that you get played for a fool. Or that’s what has happened to me, anyway. Many times. I’ll tell you about those experiences at some point. For example now, though, after dinner one night a few months ago, I figured that I’d ask B what he wanted for dessert. Simple right? Not so much:

Me – ‘What do you want for dessert? A banana, or peach applesauce?

Me – ‘I don’t know what a bananee is. Do you want a banana or peach applesauce?’

Me – ‘OK, you want peach applesauce?’

Me -‘That wasn’t a choice. We don’t have peaches.’

Me – ‘We have to buy them at the store. So do you want a banana or peach applesauce?’

Me – ‘We’re not going anywhere! You’re having peach applesauce, OK?’

So I get him a spoon and the sauce. J is crying now, probably at the ridiculousness of this conversation, so I turn around to tend to her. I turn back around soon after…..B hasn’t touched the applesauce. He’s using the spoon to slurp milk from his cup, though, with the biggest stupid grin on his face. 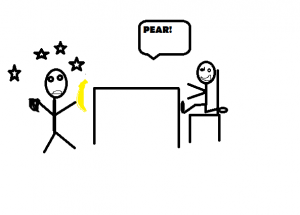