The Best Day EVER!

Small children are prone to hyperbole.  The tiniest things become the biggest deals in their minds.  Sometimes, though, it’s hard not to take their exaggerations seriously.

A couple of weeks ago, for example, I got my Ferris Bueller on, and took a day off, to chill with J.  My basic gameplan was to just go with the flow. So that’s what we did. On  the way home from our hanging out, she told me the following:

“This is the best day ever, Daddy!”

I can’t front. I smiled huge at that comment.  But what did we do, you ask? What was so special about that day, which caused such a bold proclamation to come out of her three year old mouth? Lemme give you da rundown:

♦ First, my car needed an oil change, but before hitting the shop up, we stopped at a Tim Horton’s, to grab drinks.  We sat outside and drank them, while we waited for my car to be ready.  J spilled hers. Instead of being upset, she was pumped, because she made puddles. She spent the rest of the time singing and jumping over the puddles.

♦Back home, to grab J’s bathing suit, and to pack a lunch. J wanted to go to a splash pad and have a picnic. Easy peasy.  Splash pads are all around Hamilton. Later, while driving to the nearest one, J changed her mind and said that she wanted to go to a pad “by water”. Well, that narrowed my options, but it wasn’t a huge deal. Off to Pier 4 Park we go!

♦Once we got to the park, we set up shop at a picnic table. J wanted to eat first, before playing, so we dug into our lunches. She spotted the sour cream and onion chips that I had brought for myself.  Normally, I’m not a big fan of letting her eat chips, but I figured today was a bit of a ‘cheat day’, so I said that she could have some. She happily took the bag and crunched away. Slowly.

♦A flock of seagulls began to circle our table. No, they didn’t start singing I Ran (So Far Away).  Time to move!  I suggested that J go play in the splash pad.  While I packed the picnic bag up, she ran to the splash pad, ran under a sprinkler, ran back over to me and said that she was still hungry.  The six seconds she went in the splash pad were the only time which she spent in it all day. 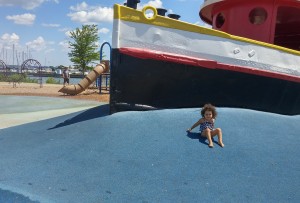 ♦Instead of eating, the park had a big tugboat playhouse thing, so I suggested that we go explore it. The boat had a picnic table inside of it.

♦We ate in the boat.

♦ We explored the boat some more, by walking all around and through it. Afterwards:

♦We ate in the boat again.

♦ Realizing that her stomach was apparently a bottomless pit, I suggested that we had ate enough food, and she should go play in the park. She climbed and slid for a while, then wanted to go on the swings. You know how some kids are cool swinging for a few minutes, and then they want off? Yeah, J’s not one of those kids.

♦ After what felt like 3 hours of of me pushing her, she had enough, and wanted off.

♦ Being near the waterfront meant that we were able to play one of our favorite games – Throw Rocks in Water. It is just as it sounds. We walk around, pick up stones, and throw them in water.  B and J love doing this, for some reason. I don’t mind it, either, because it’s an easy way to kill time. If you’re ever in Hamilton, and you see a homey and two small kids chucking pebbles in a pond, feel free to say hi to me.

♦We walked up and down the pier, to throw rocks off different points of it. While I was searching for some stones, J plopped down and started playing in dirt.

Me: What are you doing?

Me: Uh, do you want to go to an actual beach with sand to do that?

Off to the Hamilton Beach we go!

♦ J fell asleep in her car seat, on the drive over.  That gave me time to park at the beach, and take care of an important piece of business that I had been slacking on – get caught up on Drake and Meek Mill’s beef. #BACKTOBACK

♦About an hour later, J woke up. It being a warm day, and us being near the best ice cream place in the city, Hutch’s, I asked if she wanted some ice cream. Of course she said yes! We went in, and ordered a couple of cones. Cotton Candy for her, Strawberry for me.  J took one lick. Then:

J: Daddy, I’m thirsty. Can I have some milk, please? I don’t want ice cream.

You know what’s a hopeless situation? Trying to make a kid eat an ice cream cone who doesn’t want to. As you explain the importance of not being wasteful, the ice cream melts away, creating a gooey, unedible mess. If they don’t eat it, they can’t eat it, anyway. Awesome.

♦J understood what I was saying. She eventually said sorry. Not wanting to press the issue anymore, I tossed her melted cone in the garbage, went back to Hutch’s, and got her a cup of milk. They had milk on tap. Neat!

♦ From there, we strolled over to the beach.  After a quick game of Throw Rocks In Water, J happily played in the sand, on her own.

♦ As she played,  geese floated by, in the lake.

♦ Some dude and a couple of boys started throwing pieces of Wonder Bread around. This caused a flock of seagulls to scare away the geese, to try to get to the bread chunks. Still no I Ran (So Far Away), however.

♦The seagulls were looking mighty hungry, so I figured that was the perfect time for us to bounce. Homeward bound we went.

And that was that.

Looking back, there really wasn’t much to it. Shoot, it wasn’t even the best day which I spent with her that week. The fam went to a Toronto Blue Jays game on the Saturday, and B and J got to run the bases when it was over. Way cool, right?

Going on a picnic and hanging out by some water with her pops was the best day EVER! She still tells people about it, randomly.

It’s all good, though.

For real, sometimes the best and simplest thing to do with children…..is just keep it simple.