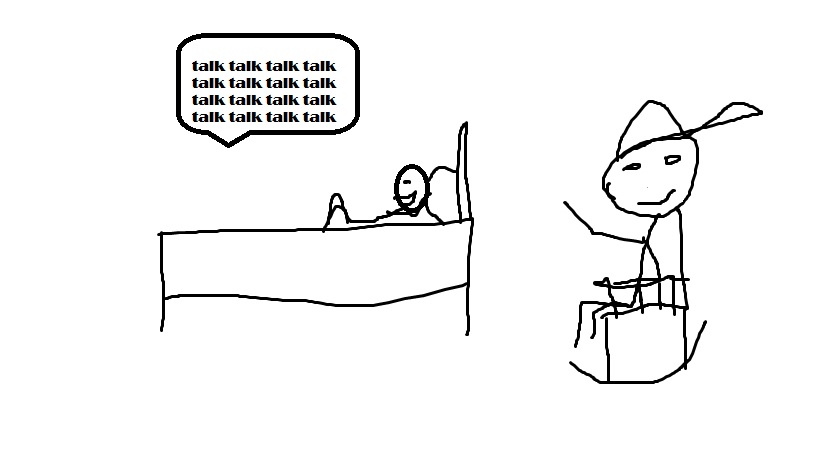 I don’t discuss it very often on here, but getting the kids to go to bed remains an ongoing problem for us. The struggle is real, man. At this point, I probably have a better chance of winning the lottery, than I do of telling B and J to go to sleep and have them happily oblige, with no shenanigans.

Take the other night, for example. I’ll give you a quick back-story first, though. See, we recently got J a new ‘big girl’ bed, because she had outgrown her other one. When we told her of our plans to get a new bed, she was excited. Her bed game was gon’ be on fleek, yo! She couldn’t wait to sleep in it!

And then we we actually got the bed.

The first night, instead of rushing off to test it out, she refused to sleep in it. She argued that she wanted to sleep in our bed. Who needs a big comfortable spread to yourself, when you can be uncomfortably wedged between two adults? #kidlogic

Anyway, over the next few days, K and I came to the unfortunate realization that the only way to get J to go to her bed was through bribery or similar tactics. This brings me to the other night.

When the big bedtime moment came, J agreed to go to sleep in her bed, BUT with one condition – I had to sit in her room with her, until she dozed off.  Well, shut the front door! She seemed pretty tired, so I would probably be outta there in 15 minutes, I figured. I tucked her in, pulled up the rocking chair, and waited.

There was one other thing, however – J wanted to talk to me as she fell asleep. OK, cool, whatever.

Turned out, she had a lot of stuff on her mind. No joke, here is what she talked about, in chronological order:

The 15 minute waiting time that I estimated was off by by about two hours. It was all good, though, as at least she was in her own bed!

I went to sleep not long afterwards. At 3:00AM, to my dismay, I was woken up……by J. She had come into our room, and was standing beside my rested head:

J – Daddy! Daddy! You are in big trouble!

J – You said you would sleep in my room, but you’re not. Now c’mon!

I honestly didn’t remember making such a deal. However, at that time of the night, exhausted and barely conscious, I wasn’t in the mood for a fight. So, I got up, stumbled down the hall, and snuggled up with her, in her bed.

Here’s the kicker: the next morning, when I woke up, I was alone. At some point, J got up (again), and went and slept in MY bed!

As comfy as my sleep was, it was obviously a less than ideal scenario. Yet, that’s how it goes in our house on a regular basis. #bedtimewtf

The struggle is real, man!