Why Reclining Seats Are Trouble

To recline or not to recline. This is the age old question that has divided travellers on planes since the, uh, inception of reclining chairs on planes. Recently, however, that debate has crossed over into other facets of life where extra comfort is an option. Take movie theatres, for example. Some of them are equipped with reclining seats that let you lean back like you’re Fat Joe in 2004. And I use movies as an example, because, recently, I found myself smack dab in the middle of the reclining seat debate. 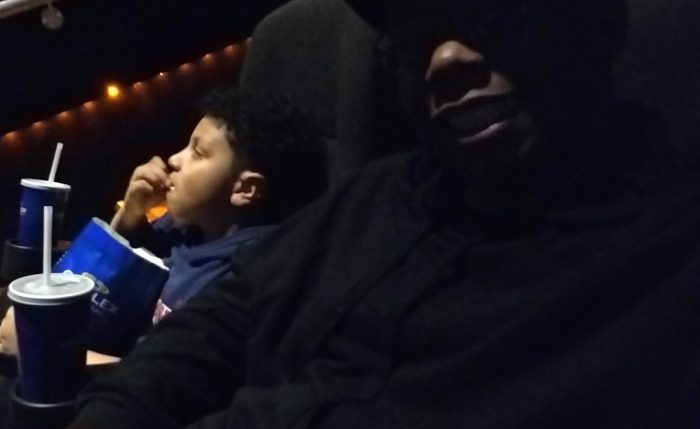 The scene was the local Cineplex, during the opening weekend of Avengers: Endgame. B and I had purchased tickets beforehand, and the theatre was jammed pack. In front of us was a man, with three boys. Irrelevant detail – the man kind of looked like the Trivago Guy. Second irrelevant detail – the man had a giant bottle of fancy water, which he clearly bought at a grocery store beforehand.

As the movie was about to start, a group of kids filtered in with some adult chaperones, who were all there for a birthday party.  They weren’t especially quiet, so the man in front of us took it upon himself to loudly yell at them about how noisy they were. The same message probably could have been conveyed politely, and not so rudely, but I digress. Anyway, not long after, the man decided to recline his seat.

Now, I don’t know if you’ve been to a Cineplex with recliners, but you can get a pretty good lean on, and this guy had a nice one going. He was in front of B, but if he was in front of me, he would have squished my legs. B seemed pretty chill, though, so I didn’t pay much attention to it. The man spent the rest of the movie in varying degrees of recline. At one point, it almost looked like he was in a rocket ship during takeoff (OK, I’m exaggerating, but you get the point). Again, though, B was fine with it.  I did try to recline once, too, but I immediately felt a knee behind me, so I propped back up.

B was cool, but he also was fidgety. It’s a looooong movie, after all. While adjusting in his seat, I did see him once, accidentally, kick Fat Joe’s, err, I mean Trivago Guy’s, err, I mean the reclining man’s seat lightly. The man didn’t say anything, but I told B to watch his feet, and not kick his seat. Even though his leg space was severely hampered, that was the polite, well-mannered thing to do. It wasn’t like we could move to another seat, either, as every one was filled.

Flash forward to the end of the movie. I saw B accidentally kick the seat again, as the man was reclined far back. The man then whipped around, and yelled at B to stop kicking his seat.

If this happened to you, and your child, what would you do? 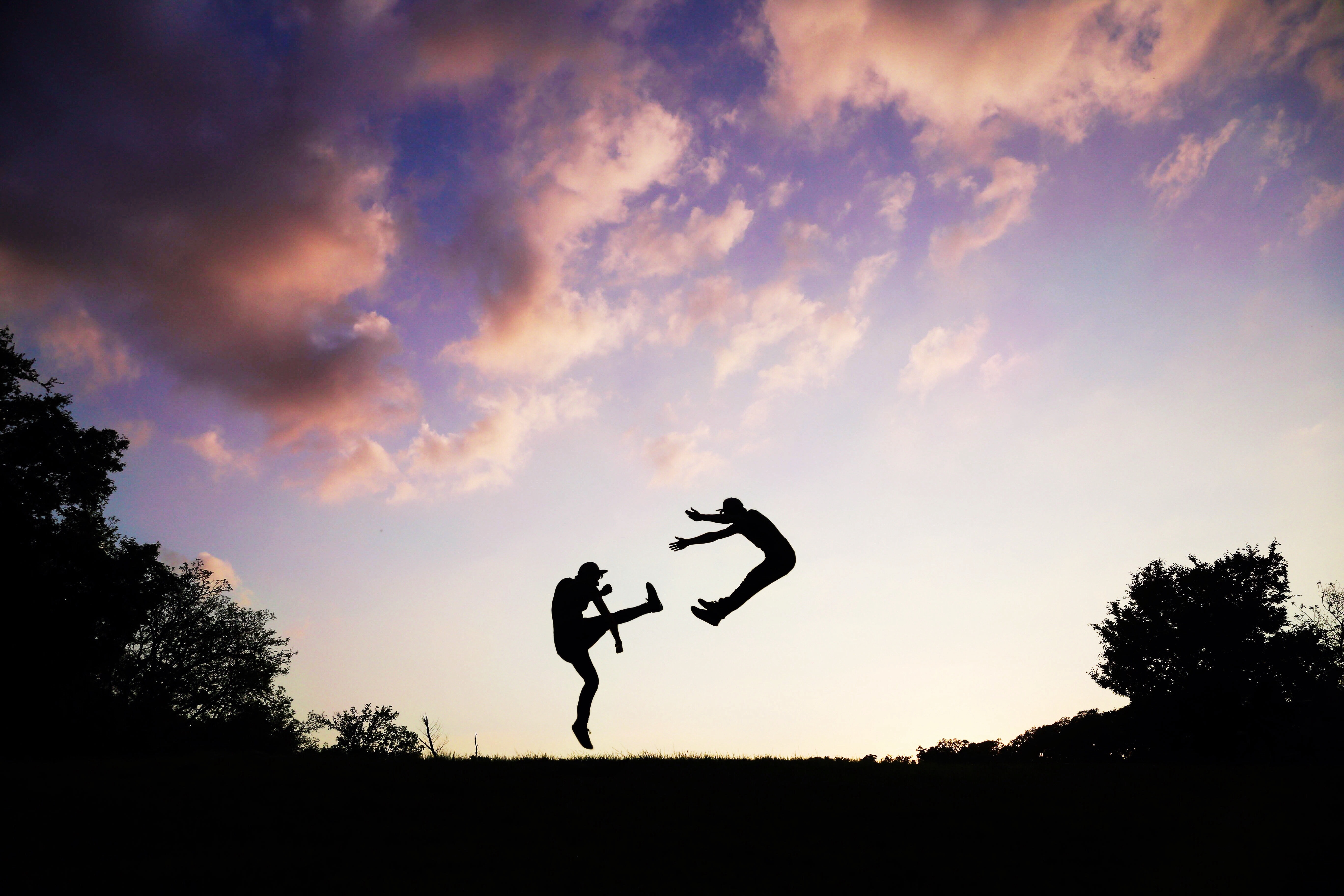 Instead of kicking his seat,  kick him!

Uh, I guess that’s an option, but not what I chose.

See, I was really annoyed. He could have just asked B politely, to stop.  When it comes to kids, and there is an issue, I tend to take it up with the parents. If this man channelled his inner Hulk and just had to rage about the incidental kicking, he easily could have yelled at me instead. Snapping on B in this case seemed kind of bully-ish. Regardless, B did not deserve to be yelled at, in my opinion.

In the ‘to recline or not to recline’ debate, the main argument for reclining is that, hey, you paid for the seat, so you can sit however you want in it. If other people aren’t comfortable, too bad. The thing is, though, to misuse Newton’s Third Law, for every action, there is an equal and opposite reaction. If you choose to recline so far back in your seat that you are compromising the person behind you, then there will probably be some kind of consequence. Knowing that, are you really in any position to get upset at the resulting consequence? Dude is all up on B’s spot, so B can barely move without touching his seat, so dude gets mad that B touched his seat? To quote The Nappy Roots – awnaw, hell naw! 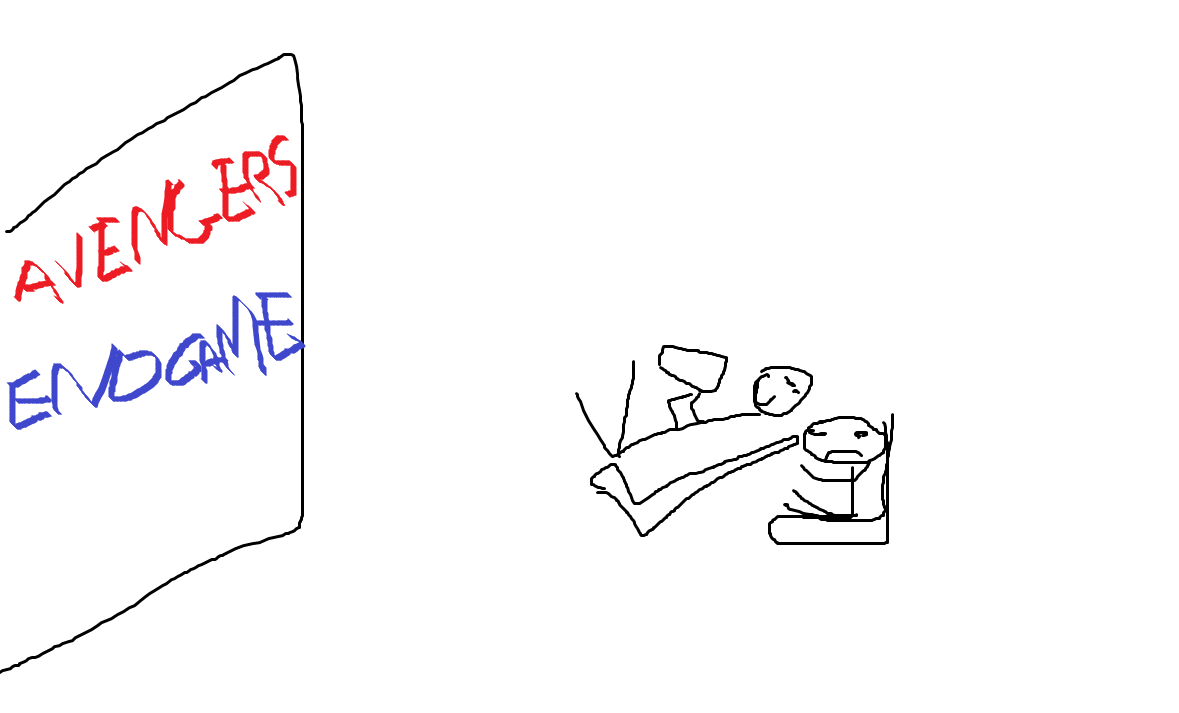 Sensing a confrontation going bad, and not wanting to miss the end of Endgame, I waited until the movie was over, to approach the man. He ducked into the washroom, which B had to use, too, so I waited there, near his group of boys, until he re-emerged. When he did, I basically told him, sternly, that he spent the whole movie leaned far back into B, and he had no right to yell at him for kicking his seat accidentally. He, wasn’t having it (shocker), and started to yell (More yelling? Double shocker) about how he wasn’t that far back, and that B and I didn’t have any manners, unlike his kids.  I walked away as he raged on and on.  I said my piece, but he didn’t get it, and I didn’t want to make the news over some pettiness. 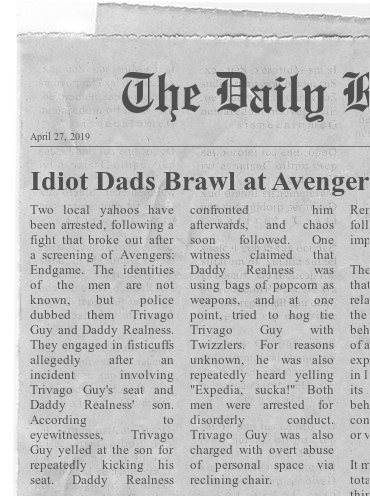 So what are the takeaways here? Well, for one, until reclining seats are abolished, I guess it’s is on us to know the etiquette in using them, and to be aware of the effects on those behind you.  I personally think that, if movie theatres, planes or wherever are going to be equipped with them, then the space in between the rows needs to be bigger, to not take away someone’s leg space. Clearly, this isn’t practical or realistic, but a dreamer’s gotta dream, right? Finally, based on my own informal research among some parenting peers, screaming at someone else’s child is a big no-no.  Whatever side of the ‘to recline or not to recline’ argument you choose, and even if you think the man in front of us was justified in being mad at B, yelling at a stranger’s kid over something trivial is a real prick move.

Speaking of prick moves, B told me that, while in the bathroom,  after our Trivago Guy-looking friend relieved himself,  he washed his hands. However, instead of drying them, he shook them off, shamelessly spraying water droplets onto B and a couple of other people. Now on that, I hope  we can all agree, no debate……