One of my family’s favourite places to visit is Niagara Falls. It’s only an hour from us, so we hit it up a few times a year. There’s just so much to do , that it is always a great way to get out and entertain the kids.

Recently, we visited an attraction which we had never been to before – Bird Kingdom!  They generously hooked me up with some complimentary passes (thanks again, BK!), so we checked it out. Here is my review of our trip there. 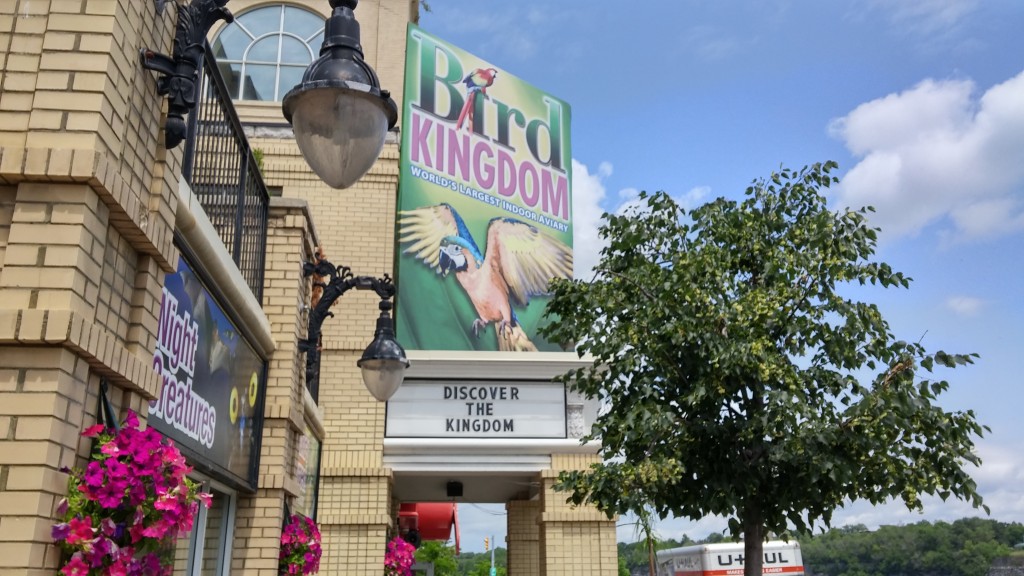 Now, I wasn’t that familiar with this place, prior to going.  I’m not exactly an ornitholgist.  I assumed that the Trashmen would be around somewhere in the building, singing “Surfin’ Bird”. When B and J asked what Bird Kingdom was, I told them that it was a place with lots of birds in it.

Turns out, it is actually a lot more than that!

What it is, you see,  is the world’s largest indoor free flying aviary. It covers several different floors, and is broken up into different experiences.

Unfortunately, our visit started off on a bad note. Despite wearing shorts, J really had her cranky pants on. Once we arrived, she refused to get out her stroller, and was being extra whiny. Luckily for us, the whole facility was very stroller-friendly, and easy to navigate. 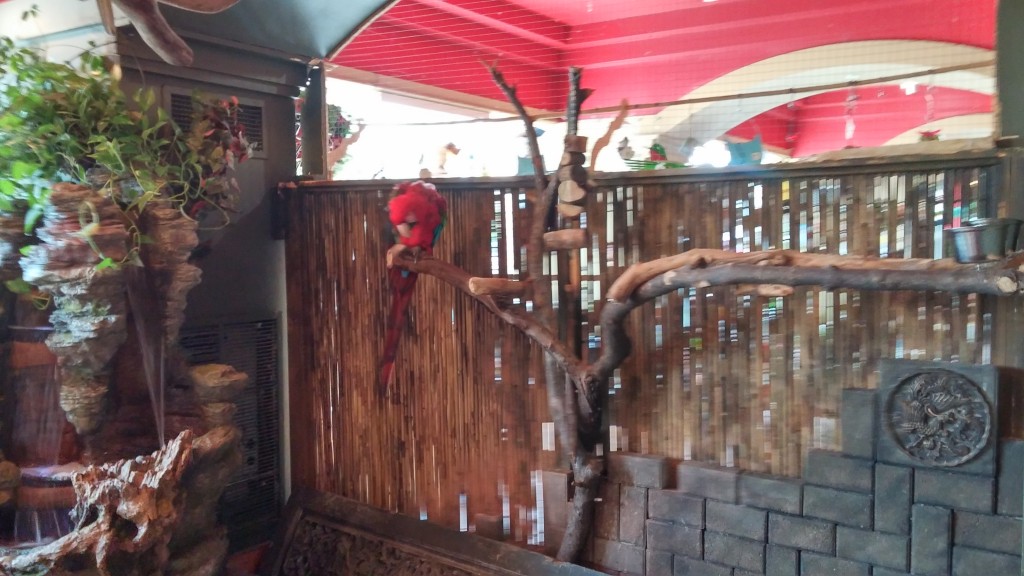 Our first experience was The Old Museum. Full of old artifacts and pictures, it showcased the history of the building, and also of Niagara Falls.   I didn’t soak it in as much as I would have liked, however. J was still grumpy, while B was in a rush to find the birds. They didn’t really want to learn about Annie Taylor, as fascinating as she was. 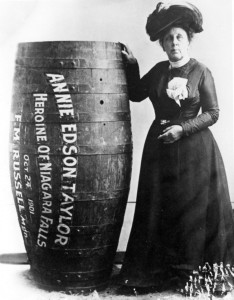 We did slow B down enough, to snap a picture of him in a barrel, going over the Falls. 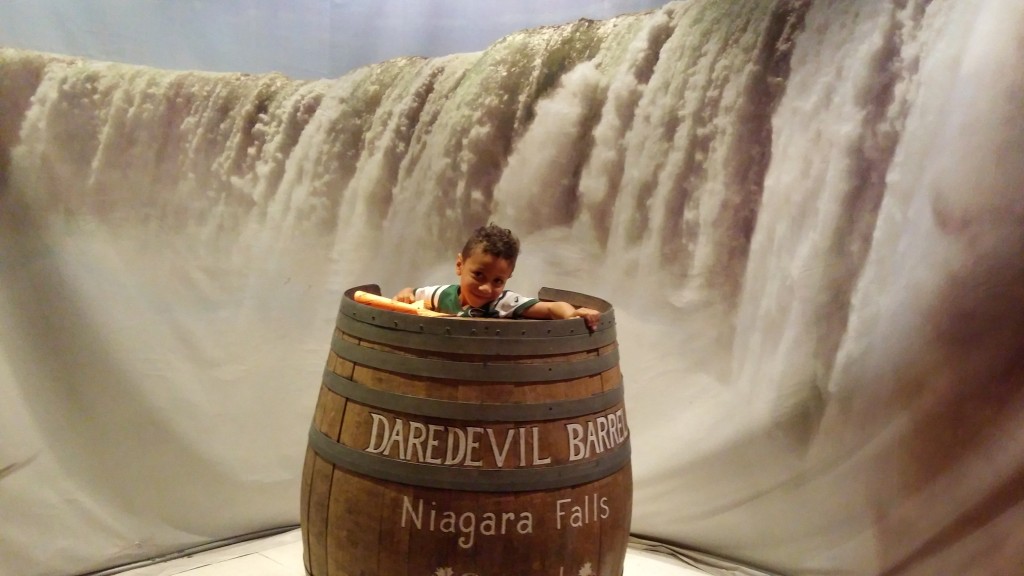 Not literally going over the Falls, of course

Next up was The Explorer’s Base Camp. This area had lots of birds and creatures out n the open, for us to get real close to. In some cases, we could even touch them! 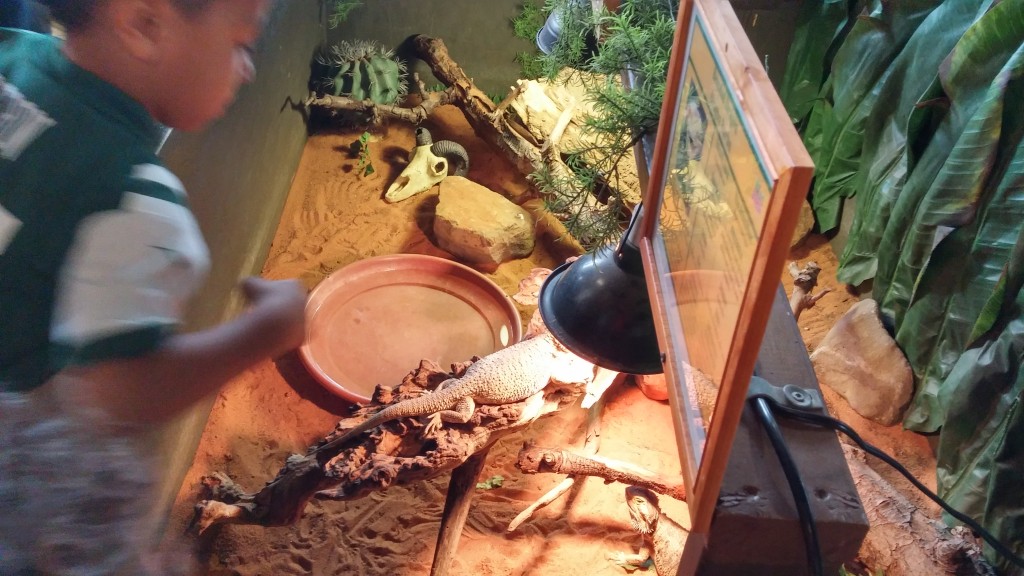 At this point, J’s mood brightened (the idea of looking at a turtle was too alluring). So she got out of the stroller, to explore. She spent the rest of the visit running around excitedly, like her big bro. 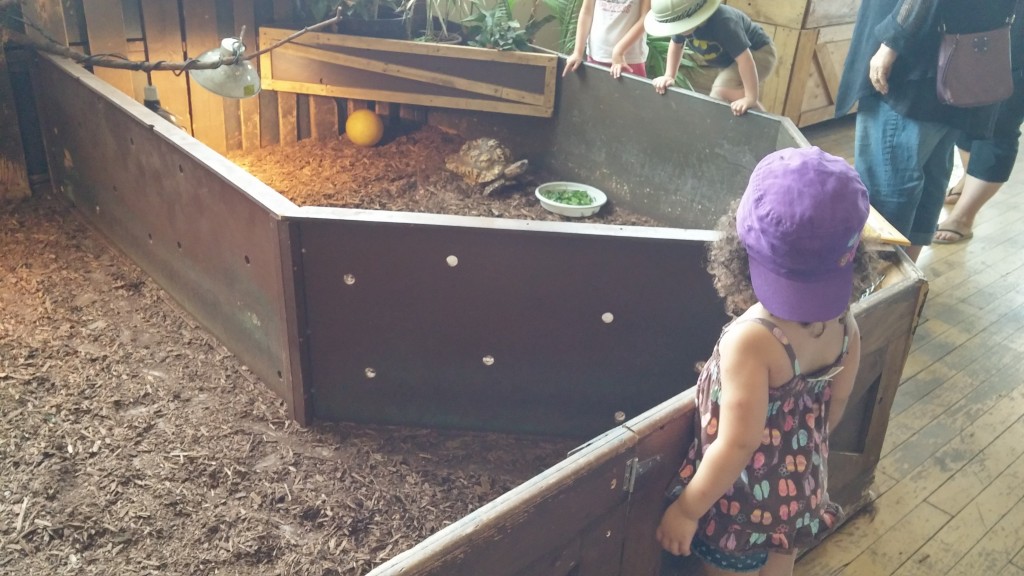 Up next was The Small Bird Aviary, which was exactly as it sounds. It was pretty surreal, watching these little tiny birds zipping around. I could feel the breeze sometimes, on my face, as they flew by.  One thing I forgot to note is that a ticket attendant gave us a list, on the way in to the kingdom. It was a scavenger hunt, for finding various things throughout the facility. Several of them were in The Small Bird Aviary, and B had a blast trying to track them down. 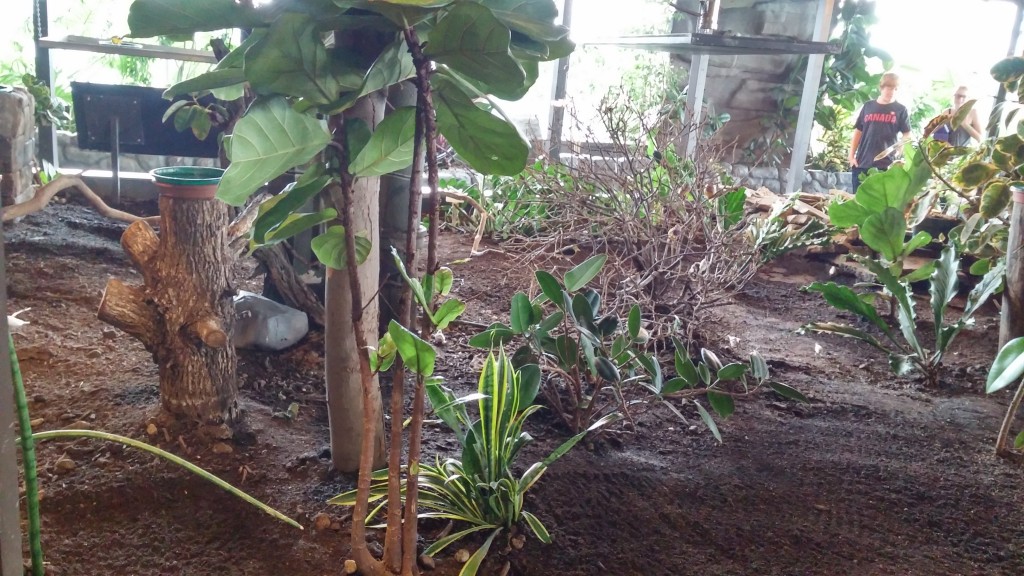 We then moved on to The Night Jungle.  This had numerous strange and nocturnal animals in it, many of which appeared to be asleep (go figure).  Flash photography wasn’t allowed, so I couldn’t take any pictures, but take my word for it: The Night Jungle was pretty cool…..and creepy. Also, while we didn’t stop to partake in it (Wait. Scratch that. We couldn’t stop because B and J whizzed by it in a hyperactive rush, to see what was next), there was a Kid’s Archaeological Dig in this area, too, where children could go and dig up treasures.

The last experience, was the best one, in my humble opinion, Discover The Kingdom. It is this huge, multi-level indoor rainforest! The pathway starts at the top, and works its way down. Along the way, you encounter numerous birds and other creatures hanging out freely. 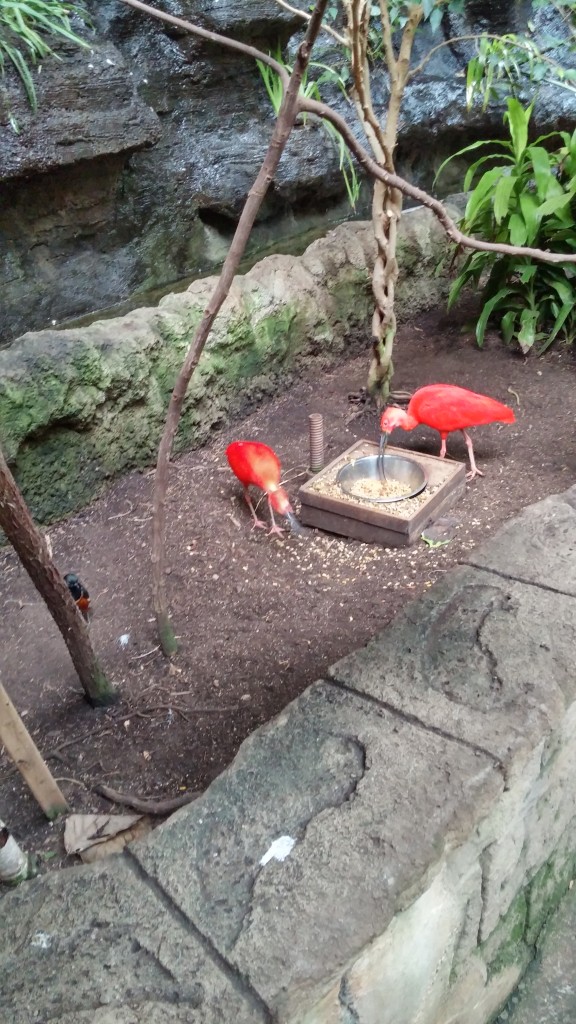 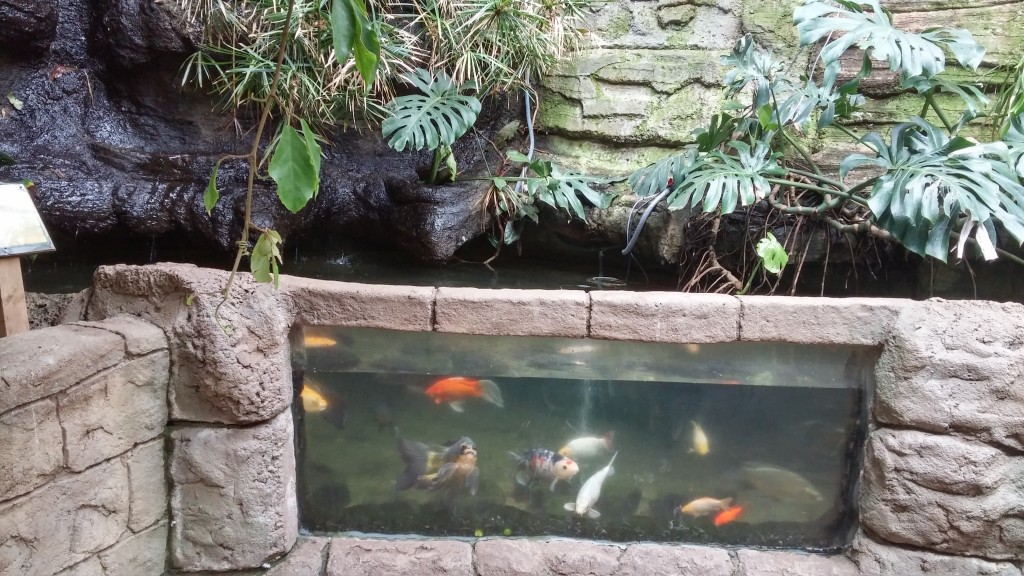 I particularly was impressed with the big waterfall, which you could walk under, and the Javenese house, a hand-carved wood structure built in 1875. 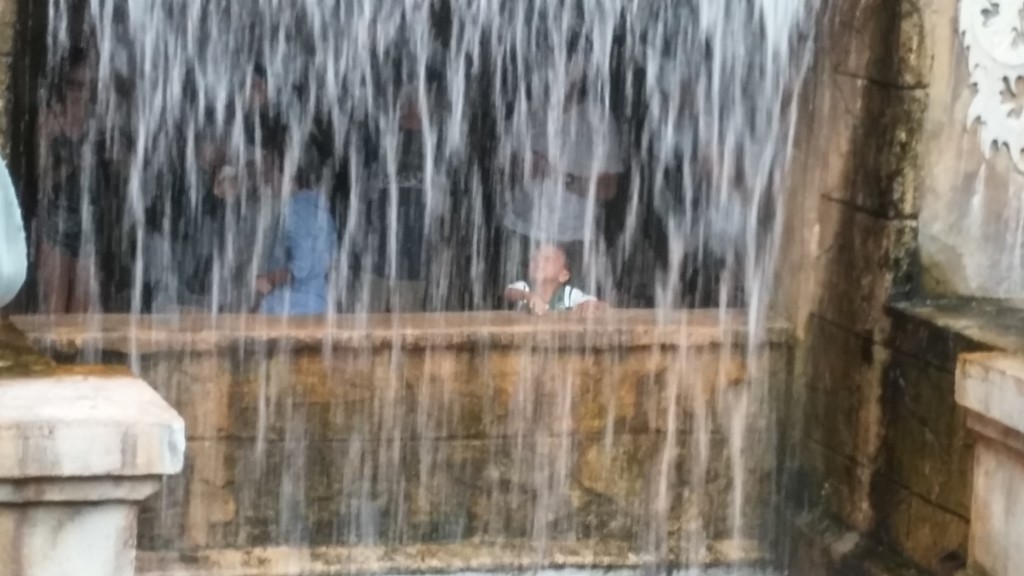 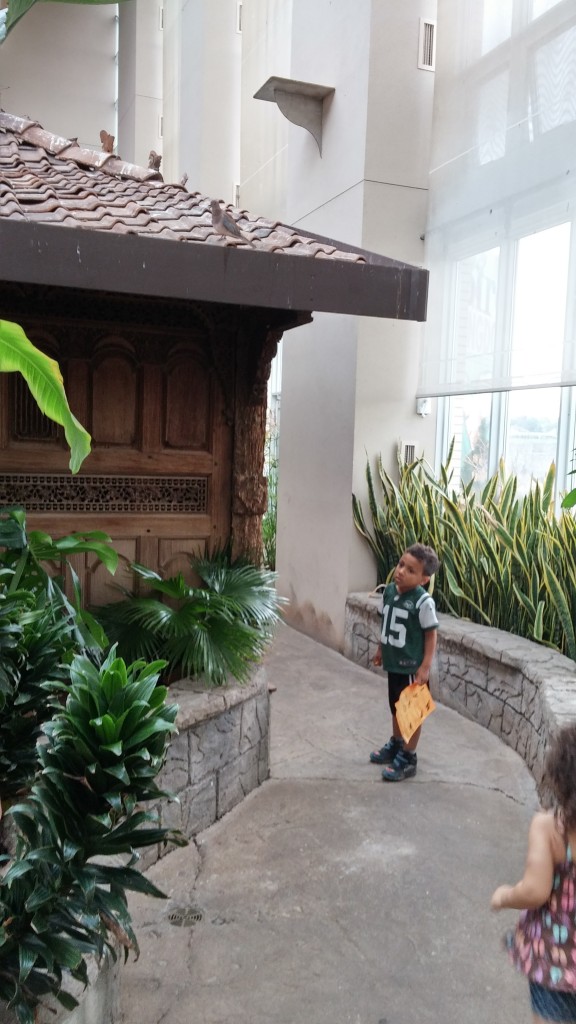 All in all, my family really enjoyed Bird Kingdom. We spent about an hour there, and that was with two fast-moving small kids who couldn’t wait to see what was next on the adventure. Tickets are reasonably priced, as well.  If you’re visiting the Falls, it’s definitely worth checking out!