My good friends at The Dad posted this on Instagram the other day:

"I just came home after a long day, so I was pretty tired, and a bit stressed. I headed upstairs and was surprised when I stumbled across this chaos when I got to the top. I asked my daughter what she was doing. She told me that she was playing School Of Rock, and then proceeded to start singing for her 'audience.' Clearly, she put a lot of time and effort into putting this all together. At that point, all I could do was laugh at the ridiculousness. Well, laugh, and tell her that she was going to have a lot work to do, cleaning up the hallway. • Children's imaginations, man. They never cease to amaze me." • Mike Armstrong, @daddyrealness • Want to share a story about fatherhood? Email fatherfigures@thedad.com.

Pretty cool, eh? Yep, it’s me catching J in one of her random creative moments a while ago.  The feedback to that post was very positive, towards both her and myself. She’s such a vibrant child, and I’m an A-OK pops,  right?

This is why it sucks so much later that same day when the post came out.  I flushed all that goodwill down the toilet, because J went missing, and we couldn’t find her. Dangerous situations involving your children are no joke.

It started off innocently enough. Mine and three other families (so picture lots of kids, and lots of adults) were at Great Wolf Lodge for the weekend.  While back at our room, B and J went off on their own, to find some ice for our ice bucket. K and I ended up in another room with the parents, discussing dinner plans. I have no idea how long we were chatting. Eventually, I saw B stroll by, alone. I asked him where J was, and he told me that she was still getting ice.

A few minutes later, J still hadn’t returned. I asked B again where J was. He said that he didn’t know. They had ended up on the third floor, and they couldn’t find ice, so he left her, because she still wanted to look.

Judge me now if you want, but only at this point did warning bells go off in my head.

Our rooms were on the fourth floor! It’s one thing if they were wandering off down the hall, together, but now J was on a whole different floor, alone, in a giant, busy resort. She also doesn’t have the greatest sense of direction.  A million bad scenarios immediately ran through my mind, so I left everyone without a word, to go find her.

This particular Great Wolf Lodge was very spacious. I know that they take great precautions to make sure everyone is safe and sound, while keeping the atmosphere cheerful. At that time, however, all I could think of was how perfect a place like this was, crawling with young children, for a sick creep to try to do something vile. I ran down the stairs, and down one of the hallways, but didn’t see J. I texted K, to see if,  hopefully, she had made her way back. She hadn’t. I think everyone else in our party started to panic then, so they went out to search for her, too.

I then took off  towards another hallway.  After I rounded a corner, thankfully, I saw her, finally. J was standing in the middle of the hall, holding the ice bucket, crying hysterically.  I ran up to her, and gave her a big hug. She then, through her sobs, said the exact same thing that I had been thinking, as irrational as it seems now:

“I thought that I would never see you again.”

It took everything in me not to burst into tears right there, dude. Shoot, my eyes just got welled up typing that sentence.  Like, what’s more heartbreaking: losing your kid, or finding your kid, and hearing them say that to you?

As we walked hand in hand, back to our room, I again felt a lot of stuff. Relief. Winded, since I was running around like Usain Bolt with a dad bod. Anger, towards B, for ditching J in such a savage way. Anger, towards me, for not just getting the stupid ice myself, and not cluing in sooner to J’s whereabouts. Mostly, though, I felt like a shitty parent (and yes, for good reason, I can hear you saying #guilttrip).

I can only imagine how scared and alone J must have felt in those few minutes, and it’s something no six year old child should experience. That’s all on me, though, for putting her in the situation.  Among all the people and commotion, it was so easy for J to go missing. How messed up is that? I guess this is how Kevin’s mom and dad must have felt in Home Alone.  It’s a parenting fail, pure and simple. You should always go above and beyond to protect your kids.  I did not.

Luckily, the story had a happy ending.  J was pretty upset, but not traumatised or anything like that. She was back to her normal, vibrant self soon after. And yes, dear reader, I promise to do everything in my power to not let something like this happen again. Word to Joni Mitchell, you don’t know what you’ve got ’til it’s gone. However temporarily.

Don’t lose your children, people, even for a little bit of time. And always get your own ice! 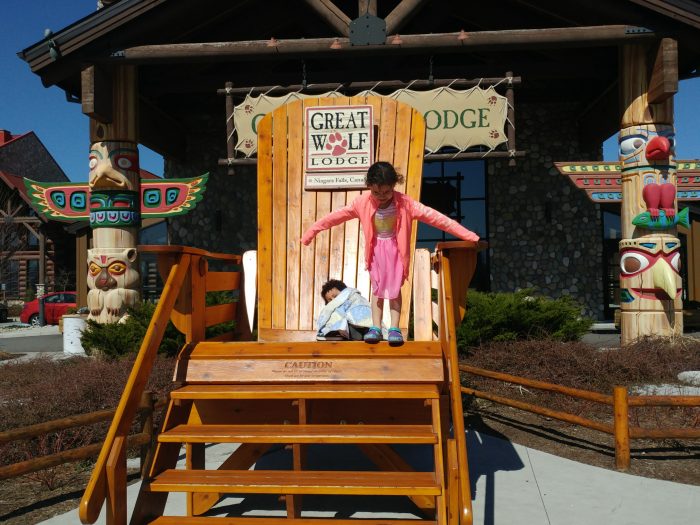 More J randomness. At Great Wolf Lodge, she wanted me to take a picture of her looking like she was going to jump off of the giant chair.

It’s impossible. You, and them, need to sleep.

As B becomes more resourceful and J becomes more mobile, I’ve learned the hard way that there is one real shady part of the day.

It’s that time between when the kids wake up…. and when I wake up.

See, they could both wake up and entertain each other on their own, before K and I emerge from our slumber. Or, they could wander into our bedroom first and ask when we’re getting up, resulting in me mumbling some random answer to buy me a few more minutes of sleep, before they take off again. Whatever the reason, this period where they are left unattended usually results in the most ridiculous, illogical things. It’s like an abyss of WTF moments.  Like, I don’t understand what they’re thinking as they’re making a mess in the playroom with shampoo, or covering their faces with chapstick, or emptying bins of cars in our in bedroom so that our floor looks like a Hot Wheels factory. 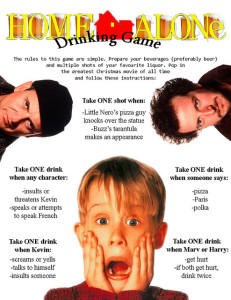 Maybe they were playing Home Alone, and were setting a booby trap for the Wet Bandits.

Take the other morning, for example. B and J were up early (like, before roosters early).  I awoke with B between my legs, rowing them and rocking back and forth as if I was a stupid kayak or something, while J laughed. I told him stop and go watch TV in the playroom, so off they went. Cool. All was quiet for a bit, but then they wanted breakfast . Fine, whatever. I grabbed some food for them, told them to eat in the playroom,  took a quick look around to make sure they hadn’t gotten into anything, and then went back to bed.

After what I said about this great unknown timeframe, you’d think I’d have learned my lesson by now, right?

I dozed off, and not long after (maybe  20-25 minutes), I vaguely think that there was yelling from K about someone eating candy. Anyway, I got out of bed and saw disposable baby wipes everywhere. On our floor, in the playroom, in the hallway.  The kids had gotten into a bag of them. I groggily went into B’s room and saw B by the bag, holding a wipe. He proudly told me to look at how clean his room was, because he polished the walls.  Man, getting him to pick up his toys is a struggle. Of course he chose this time, with the wrong object, to become Mr Clean.

After politely telling B to stop, I went to work in gathering up the wipes. Started in B’s room and worked my way out. I noticed that some of them were red. Not blood red but a goopy red. My immediate half awake thought was that episode of Breaking Bad where Walt and Jesse tried to dispose of a body by putting it in some hydroflouric acid.  This was followed by my next completely logical thought of  ‘Oh, shoot, where’s J?!’ 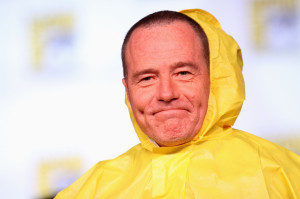 Have no fear, she was just halfway down the stairs, no diaper on, holding a goopy wipe, polishing the hall walls. She saw me, came up the stairs, walked into our room, wrapped the wipe around a dresser handle, smiled at me and went into B’s room. Normal chain of events.

I followed J and found B had gotten into the bag AGAIN. He had wipes all over his bed. Polishing his sheets, I’m sure.

Anyway, I took the bag with me this time, and went downstairs to find the source of the goop. All of the lights were off except for the one in the pantry so I went over to it. I walked past some candy wrappers, opened the door…..and stepped in a big puddle of pee. We don’t have pets, by the way. Even old Sherlock Homeboy here cracked this case. J took her diaper off, went to help herself to some treats and took a leak on the floor. Once again, perfectly reasonable behavior. After cleaning up that mess, I was more than a little peed off (and on….my foot) so it was back upstairs to talk to J. I stormed into B’s room, and found them like this: 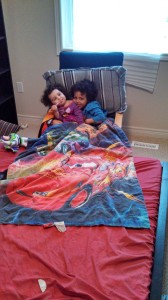 B said that he didn’t like his bed, so he made up a new one out of a chair. J has a toothbrush because…..I don’t know. Hey, dental hygiene is important after sneakily gobbling up candy. My anger turned to confusion, so I just had to laugh at them.

The goop was (and still is) a mystery, however.

Welcome to the great unknown.