When I think of Cooperstown, New York, I think of one thing – baseball.  Similar to how Augusta, Georgia is revered by golf aficionados, baseball fans like yours truly hold Cooperstown in the highest esteem. As such, many people flock there in the summer, especially during the Hall of Fame induction festivities. However, being so closely tied to a summer pastime does pose an interesting  question- what the heck goes on in Cooperstown, after the bases are put away, and the diamonds are cleared up for the season? Fortunately for my family and I, we were able to find out the answer to that question, when my friends at This Is Cooperstown invited us down for a fun-filled winter weekend! Turns out there are plenty of things to do in Cooperstown in the winter!

Regular readers know that we love road trippin’, and Cooperstown was a perfect destination. To my fellow Canucks in the Hamilton/Toronto area – our drives there and back each took about five hours, with stops. Upon arrival, it becomes apparent quickly how unique a place Cooperstown is. It’s a small village, nestled at the end of a lake, basically. The downtown area has one stoplight. There’s only one grocery store in town. Main Street is lined with restaurants, shoppes and the Hall of Fame, but you can’t exactly drive very fast down it.  I kind of felt like that I was in Stars Hollow, actually, and expected to bump into Rory or Lorelai Gilmore at any time. I don’t mean that to throw shade; I love Gilmore Girls. I’m just sayin’, picture Stars Hollow with a baseball focus, and that’s Cooperstown.

This Joltin Joe Dimaggio song is now on my daughter’s playlist of favorite songs, no joke.

Most of that focus obviously is on the town’s biggest attraction, the Baseball Hall Of Fame.

As someone who’s dreamed of strolling the hallowed halls since I was a lil dude, I was in heaven. The amount of history that it covers, and the items and memorabilia on display, is overwhelming, but in the best way possible.  Walking past the walls filled with the plaques of all of the inductees gave me goosies (word to Jennifer Lopez!).

The Hall does provide a scavenger hunt for children to do, with a prize given out, for completing it. B and J, to their credit, were determined to finish it, which was cool. The only thing was that they zipped through the place to find the answers, and didn’t really want to drink in the awesomeness of it all, which meant that I couldn’t either. I left thirsty (for more).  K thought that more interactive exhibits probably would have helped engage them better, which is probably true. Regardless, my family, who range in levels of baseball fandom, all enjoyed the Hall Of Fame to varying degrees, and it’s definitely THE must-see attraction, when in Cooperstown. Be sure to grab a bite at the iconic Doubleday Cafe, too, before or afterwards. Besides having delicious food with generous portions,  it’s like a two minute walk from the Hall, and there’s lots of interesting baseball memorabilia on display there, as well.

Along those lines, a visit to the Cooperstown Bat Company was also in the cards. They offer tours of their factory, including a bat turning demonstration. The people there were very friendly, knowledgeable and legit seemed to love their jobs. To be honest, my kids, while initially really into it, did get bored after a while.  Maybe just plan on a quick trip, if you go with little children.  However, it’s a fascinating place.  Don’t let the size of the facility fool you, too.  Their capabilities and clients are impressive.  One of the coolest things that they offer is a custom engraving service. A high quality wood bat with a name engraved on it makes a great souvenir.  Since they have an online store that ships all over, it makes a great gift, too, for Christmas! 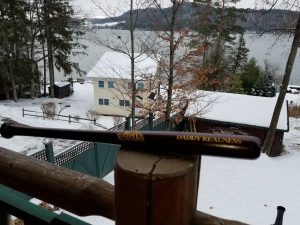 Along those lines, the timing of our trip (late November) happened to coincide with some local holiday festivities. For example, we braved the cold one night to check out the Santa’s Arrival Parade. Main Street  was filled on both sides with families eagerly awaiting Santa’s appearance. 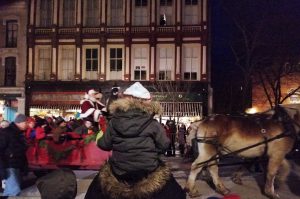 There was a buzz in the air, as only St. Nick can create, among excited children.  Well, a buzz and a lot of chattering, too. From people’s teeth. For real, it was chilly!

Eventually, after the floats and performers and whatnot went by,  Mr. and Mrs. Claus arrived with their ‘reindeer”, police escort in tow, like they were rock stars or something. They set up shop in a park on Main Street, which had been transformed into a Christmas village. Kids then lined up to meet them, which was a nice touch, different from other parades that we’ve been to. Anyway, it was nice to see the community come out, to interact and enjoy the event. I really felt at home there, and not like a tourist. 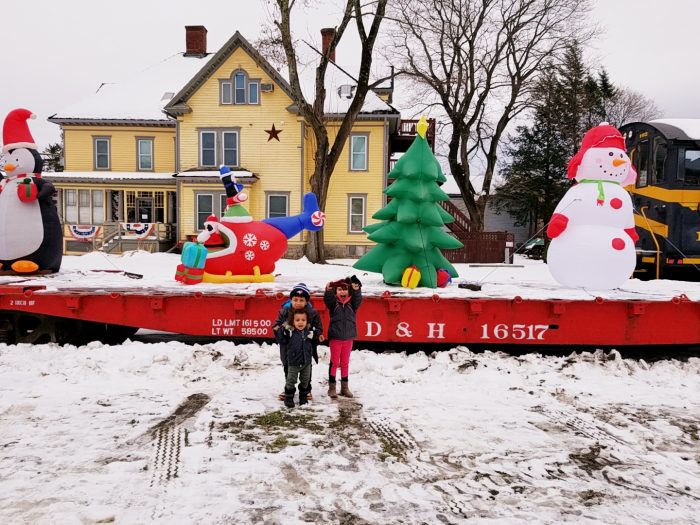 Also on our agenda was an adventure on The Santa Express, courtesy of the Cooperstown & Charlotte Valley Railroad.  Train cars were decorated on the inside and outside with a holiday theme. While on board, we went for a slow, relaxing, heated ride along the tracks, while enjoying goodies and Christmas music. The highlight, of course, was an appearance from Santa and Mrs. Claus. They had gifts for each of the kids on board, and handed them out to everyone, by name. B and J couldn’t believe it, when they received a couple of toys on their wish lists.  The magic of Christmas, I tell ya. 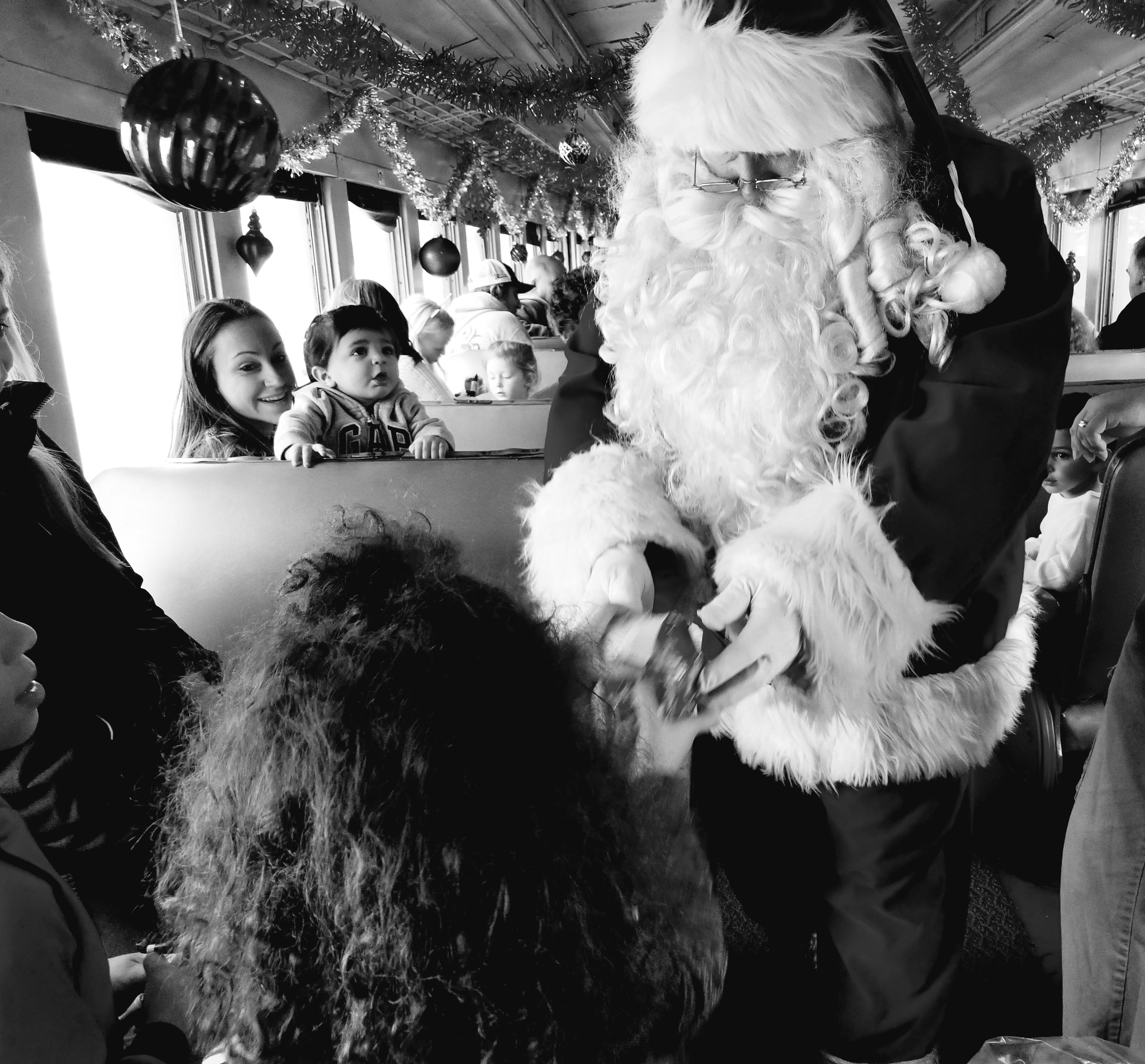 Along those lines, we were magically transported back in time, while in Cooperstown, too! Well, not really, but we did venture out to the Farmer’s Museum, to see what life what life was like 100+ years ago. 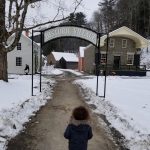 Cooperstown in general has a throwback, old-school vibe to it, especially in terms of the architecture, but the Museum takes it up a notch. Past the main barn (which had various interactive exhibits and displays in it) was a historic village. It was comprised of buildings and characters which would have been common in the 18th and 19th centuries, like a school house (with a teacher) and a tavern/hotel.  There’s also a farmstead on site.  My kids’ favorite part, though, was the Empire State Carousel, a retro merry go round. 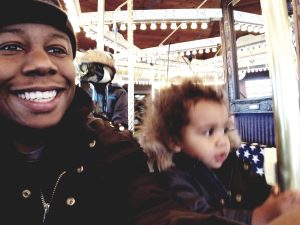 Alright. Maybe it was my fav part, too.

Along those lines, my family LOVED our accommodations for the weekend! We stayed at the Oneida Lodge North, courtesy of CooperstownLuxury.com.  This was basically the most spectacular cottage that I’ve ever seen. The lodge was multi-levels,  featuring a beautiful, intricately designed staircase that wrapped around a pine tree.   It was huge and spacious, too, which meant that the kids had lots of room to run around acting lit, or in B’s case,  to work on his Fortnite dance moves. I tried to play hide and seek with B and J at one point, but I gave up after one round, in trying to find them. The place was that big.   It’s also located on a lake, with access to a boat house, and a dock. In the summer, it would be dope. However, even during a frosty November weekend, it was still fun.  There was a games room, loaded with board games, and plenty of flat screen TVs throughout. Fireplaces, too, if you want to level up the cozy factor. 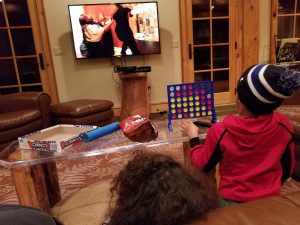 With lots of windows and balconies, the views were outstanding, and peaceful. Nature rules! 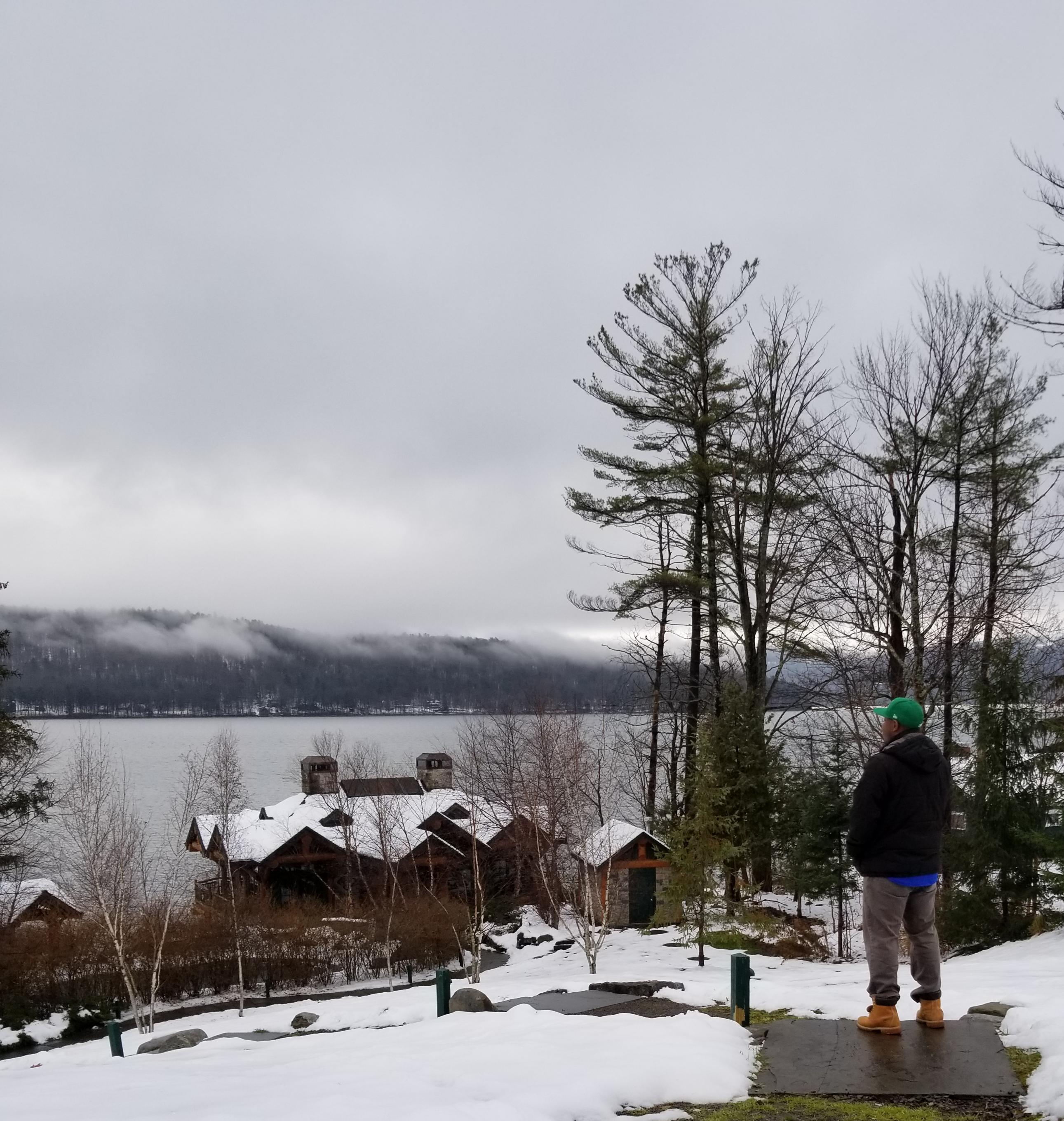 The kitchen was well stocked with utensils, and lots of modern appliances, including a dishwasher. No paper plates and plastic spoons for us. Everything about the lodge that I could see was high quality, made with a fine attention to details. 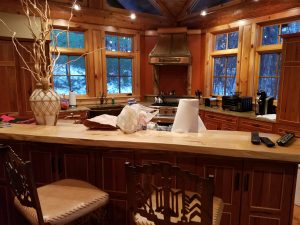 The owners and staff were even nice and responsive.  They were in communication our whole time, making sure things were going well. 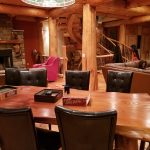 If you’re planning on staying with a large group of people, this is a great option, too, as our lodge could sleep 10, with bedrooms that were very roomy.  Seriously, if want to treat yourself to something a bit different and more secluded than a regular hotel, I can’t recommend staying at a CooperstownLuxury.com property enough. 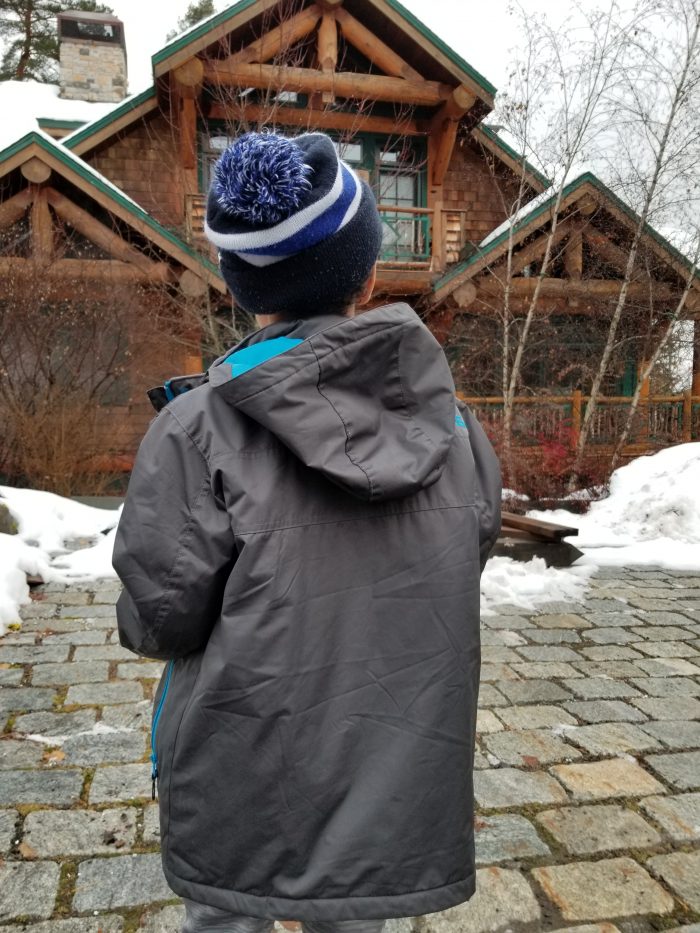 So there you have it. After spending three days in Cooperstown, I think that the question has been answered. What goes on there, after the baseball season has ended?

A lot of fun stuff still, that’s what.

Disclaimer:  while we received complimentary accommodations and tickets/passes to various attractions, thoughts/opinions expressed are 100% my own.

Note: While I was compensated for this post by Imports Dragon, the opinions expressed are mine, as always. 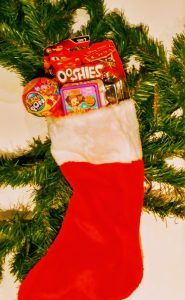 Every year in our household, Santa Claus covers off the main presents, no problem, but he slacks off on the stockings. In fact, typically, he scrambles last minute to fill them, and pretty much just hopes that the kids won’t go ‘WTF’ when they empty them. This year will be different, though. My, err I mean, Santa’s good friends at Imports Dragon got it covered. As a distributor and manufacturer of numerous brands of toys, they offer a wide variety of products to satisfy kids of all ages. Available online, or in stores nationwide, here are some that I think make great stocking stuffers for my kids (and hopefully the children in your lives, too!): 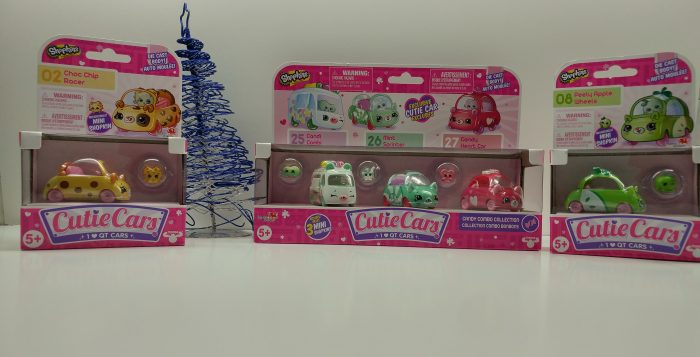 I’ve mentioned before that Shopkins are big in our house. Cutie Cars are a natural extention of those. Cute little collectible cars that you can put mini Shopkins in, and take for a cruise! 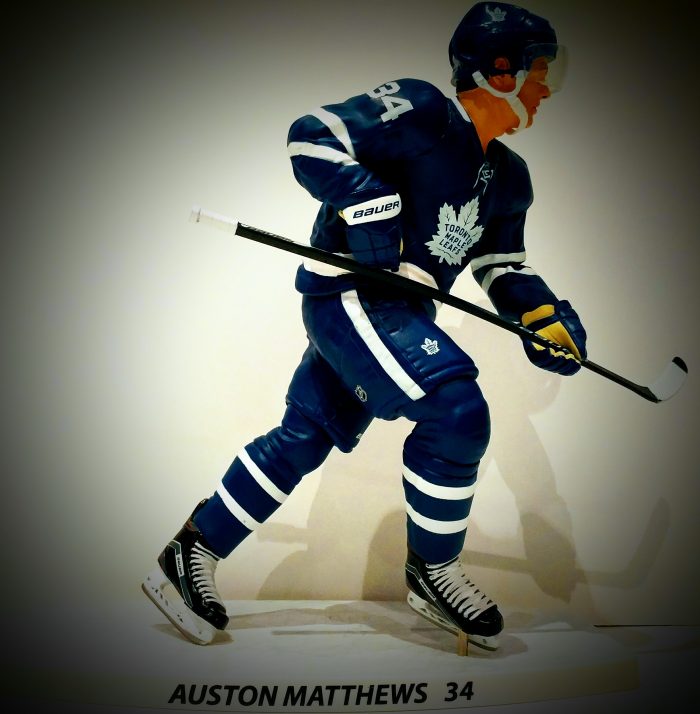 Speaking of collectibles, these high quality, licensed NHL figures, available in various sizes, are a sure shot to please any hockey fan’s stocking. 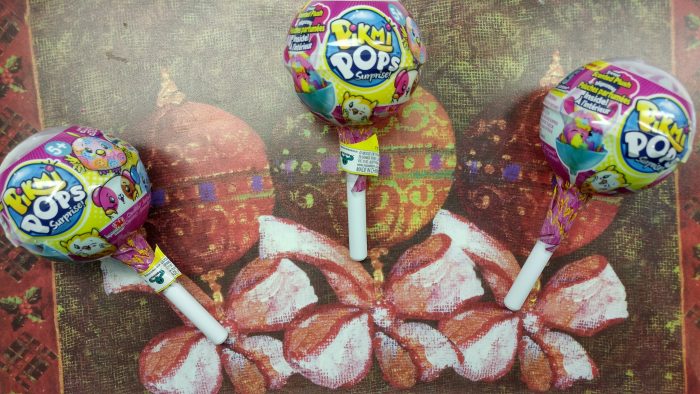 Pikmi Pops are toy lollipops with an element of fun surprise inside. If your kid loves making videos of them unboxing stuff, they’ll especially love these. 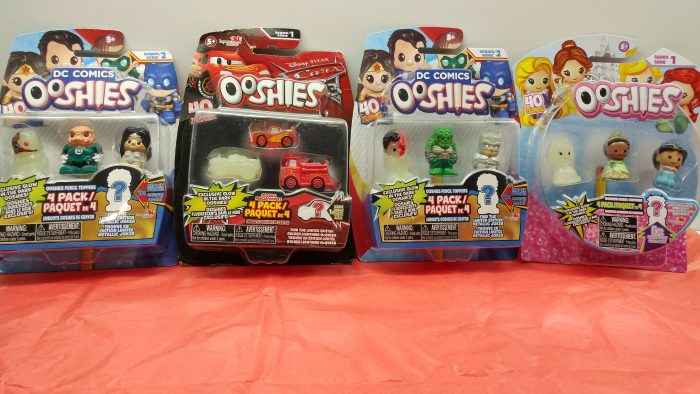 Another cool collectible. Ooshies are tiny, squishy figurines of licensed characters, like DC, Marvel and Disney Princesses. They also double as pencil toppers, ensuring your child will have the most lit writing utensil in the whole school, fam. 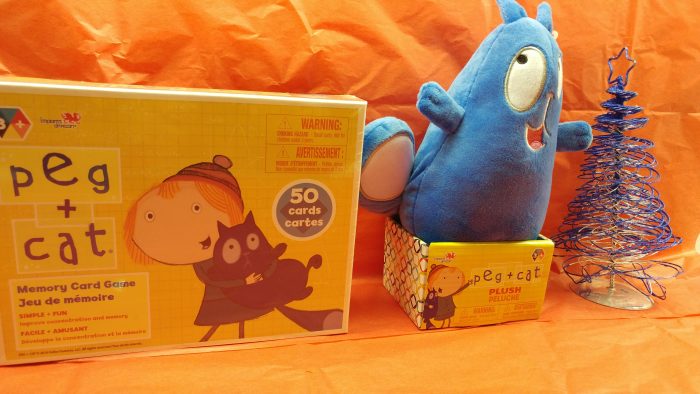 Peg + Cat is a popular children’s TV show, so fans of that show will really appreciate the plush toy, and the themed memory card game! 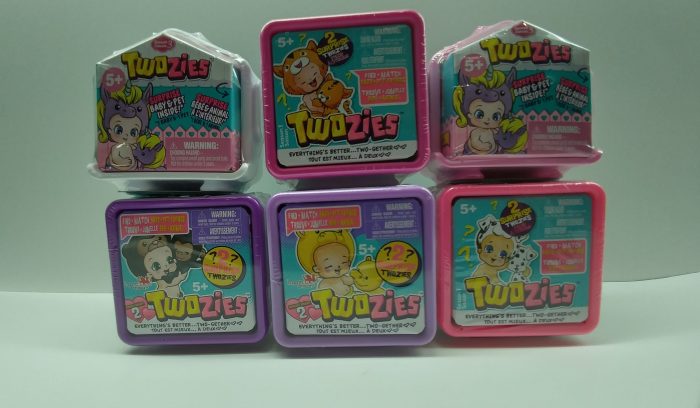 More surprise toys! Except instead of just one mystery inside a pack, there’s two – a cute little baby and a pet. The fun is in collecting them, and mismatching the duos. 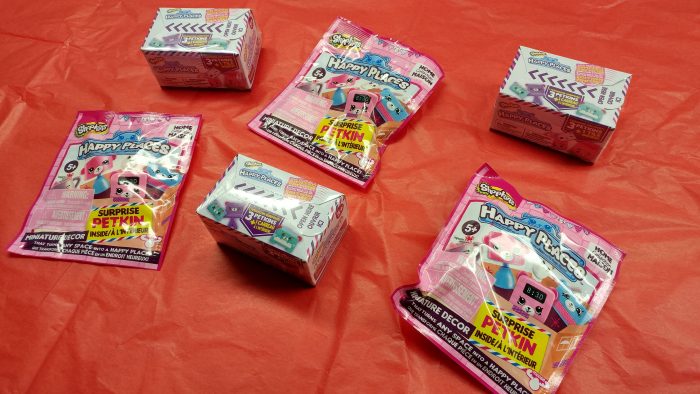 Here’s another one from the Shopkins universe. Happy Places are collectible, miniature decor toys. 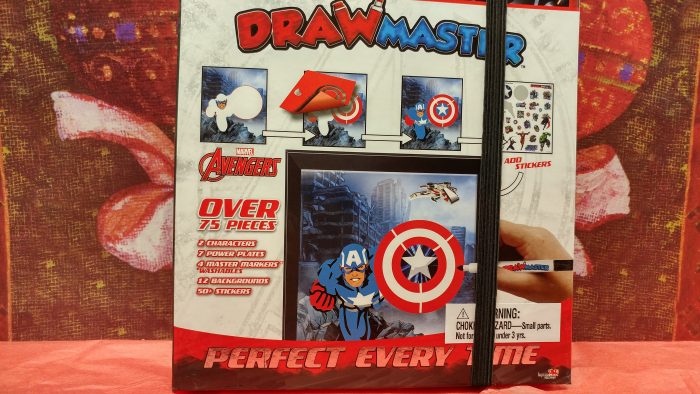 Drawmaster is exactly what it says it is. A drawing kit that helps you draw the perfect piece every time. Sweet!