It’s a sunny, muggy Friday afternoon in August, and I’m standing on the field of Atwood Stadium, in Flint Michigan, with my family. It’s busy here, full of kids and adults interacting with each other.  There’s an excitement in the air, too. Lots of laughter. Lots of smiles. We exchange pleasantries with a complete and total stranger. Soon after, the stranger rounds up her children, and four others, including my nine year old son B. The stranger then says goodbye and leaves with them all. As I stand there, clutching my daughter’s hand, sweat now escaping my forehead more rapidly than before, watching as my son walked across the field with the stranger, and then disappeared out of the stadium, I wonder if I just made the biggest mistake of my life.

Welcome to the Canusa Games.

OK, OK, that’s a melodramatic opening paragraph, so I should probably provide some context.

The Canusa Games are, per their website, North America’s largest and longest running international games. Athletes mainly under the age of 18 from Hamilton, Ontario (my hometown) and Flint, Michigan compete against each other annually in various sports.  The two cities take turns each year hosting, as well. This year, it involved over 1200 athletes across 13 different sports. Of those 1200 athletes, one of them happened to be my nine year old son B. He tried out for Canusa’s youngest age division’s basketball team, and ended up making it.  Basically, picture the Olympics but on a smaller scale; replace all the countries in the world……with Hamilton and Flint.

The 2019 Canusa Games took place in Flint, over three days. Here’s the huge part of the equation, though. Unlike the Olympics, which has an Olympic village to house the participants, the Canusa Games relies on billets. The visiting athletes all take chartered buses to the hosting city, and are then paired with a local family for the weekend. That family houses them, feeds them, and gets them to their respective sports on time.   It’s a longstanding tradition.

Now, back in the day, growing up in Hamilton, the Canusa Games to prepubescent/teenage me sounded awesome. Roll up into Michigan for a weekend by myself and get treated like a big shot while competing in a sport? Sign this boy up! Unfortunately, prepubescent/teenage me lacked the actual skills required to make a Canusa Games team, so the awesomeness remained in my head only.

Nowadays, the idea of leaving my  little kids alone in a foreign city with a stranger for a weekend terrifies me.  In fact, when B made the Canusa basketball team for his age group, I figured that we would take advantage of the modified billet system. The host family would handle B  during the day, and we would come grab him at night.  Unexpectedly, though, K wanted B to do the full billet! She HAD actually competed in the Canusa Games when she was younger. It was a great experience, with no incident.

Times change, of course, and your feelings evolve as you grow up. Nostalgia tends to cloud your memories, as well. The more that I thought about it, the more that I just didn’t get it. The billet system seemed like a quaint idea from a woebegone era to me, when people didn’t lock the doors of their homes, and children sat in the passenger seats of cars without using seatbelts. Society is just so much more different now. America is just so much more different now.  What the heck was I missing, when it came to Canusa? How could so many people be so trusting in this system, when it defied common sense? My family was making the road trip to watch B, but some parents just left their kids at the bus stop in Hamilton. Good luck, see ya in a few days, essentially.

For my own sanity, I wanted to believe in Flint, Michigan.  And then I learned this. And this. Shoot, there’s even a Netflix documentary about the city which, spoiler alert, doesn’t portray it very glowingly. Don’t forget the water crisis, too. You can’t even take in a Flint Tropics game, as they don’t actually exist! Well, maybe that one doesn’t count.  Regardless, K, who’s usually more overprotective than me, was fine with B going it solo. Nothing on the old Google machine listed any horror stories from past Canusa Games, either.

What the heck was I missing?

These are the thoughts which raced through my sweaty head as I stood in Atwood Stadium on that fateful afternoon.  Similar to the Olympics, the Canusa Games had an Opening Ceremonies, complete with the delegations walking into the stadium separately, national anthem performances, and a torch lighting run.

When the ceremony was complete, the athletes and their families met up with the billets on the field. Besides passing a police check, I knew nothing about the prospective host for B. If you didn’t know me at all, but knew that I was going to watch your precious child for three days, what would be going through your head?  My perception beforehand was so rife with negativity that I will admit to grasping at judgemental straws.  However, B’s billet gave off a strong first impression. As well, while most hosts were taking one or two young athletes, she was housing four. You’re either bananas or incredibly openhearted for taking on such a responsibility, and as they disappeared across the field, I was hoping that it was the latter.

B’s first game was later in the afternoon, which gave K, J, little KJ and I some time to check into our hotel and grab a snack. Every city has bad areas and good areas, no doubt. Driving around Flint was pretty eye-opening, nonetheless. Neighbourhoods full of rundown, vacant storefronts and houses, pocketed by empty plots of land.  Instead of cars parked on streets, I saw more cars on cement blocks in front lawns with no rims than I’ve ever seen before, in one particular street.  More people sitting on front porches glaring as we drove by than I’ve ever seen before, on another street. A Starbucks was temporarily closed, so we went to the adjacent Quizno’s, and I audibly gasped when the Quizno’s associate informed us that the Starbucks was closed because of a water problem (luckily, it had to do with a heating issue, and not because of the Flint water crisis).  There’s quite a bit of “used to be” in Flint, which is better than being “never was”, I think.

At B’s game,  we seated ourselves near the other Hamilton families in attendance.  Conversations centred around how sad Flint was, and how scary. How there were doubts about drinking the water still. The funny thing was, as I looked around at the Flint families, there was no sadness or scariness. Just regular, happy people, having a good time.  As the game went on, it became readily apparent that, when it comes to Canusa Games basketball, Flint has Hamilton’s number. The contest was never in doubt, and Flint won running away. 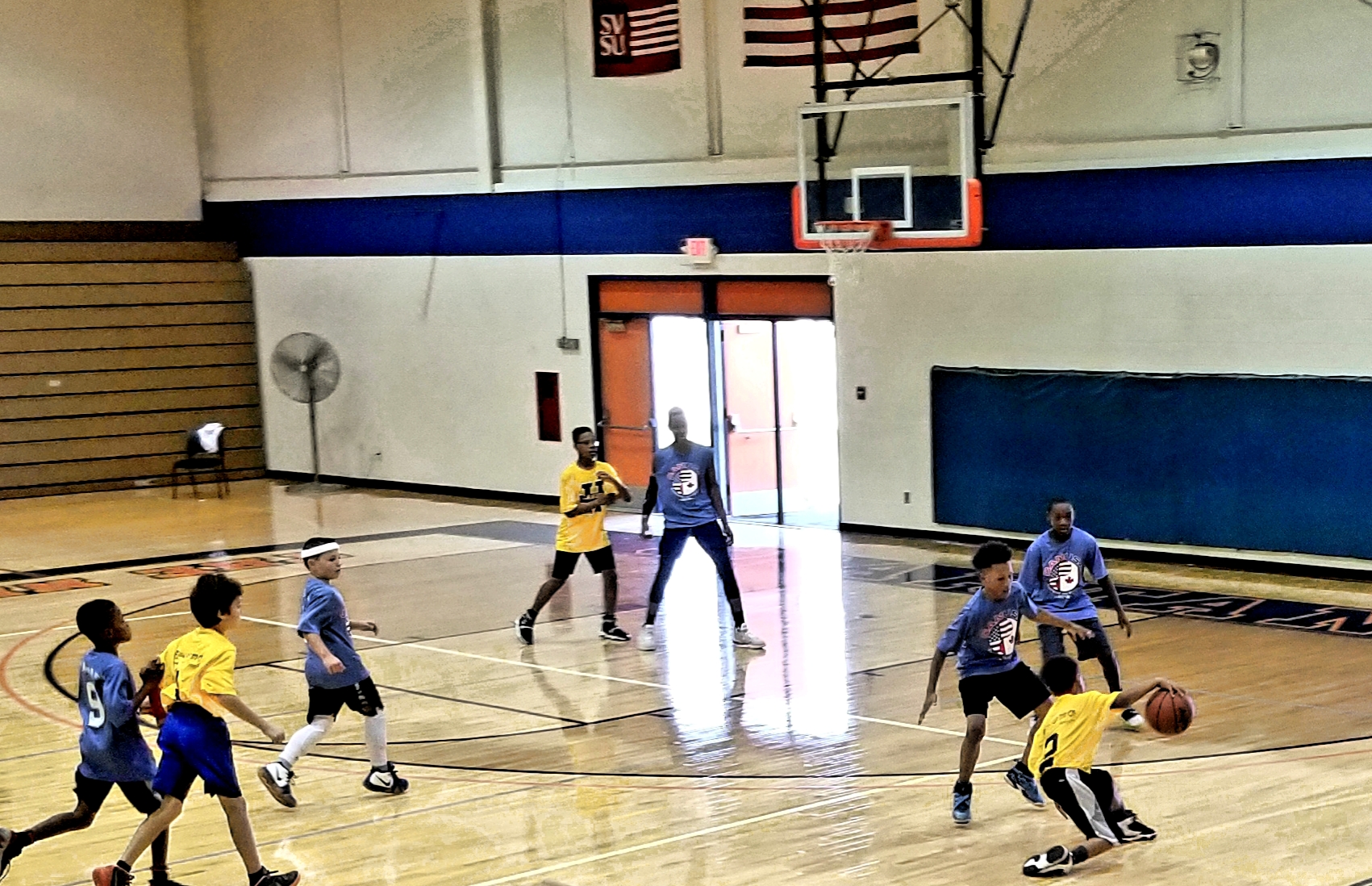 I’ve seen kids get pretty demoralised after such a defeat, but when the game ended, there were plenty of smiles and camaraderie among both sides, including from B. The billets were matched up by age and sport, for the most part. Evidently, it’s hard to be upset at your housemate for the weekend, after they beat you. The game the following day had the same result, and same vibe.  Also, there was more mingling back and forth amongst the Flint and Hamilton family contingents.  To top it off, not only was B safe, but he couldn’t wait to head back with his billet, and totally brushed us off! #theygrowupsofast

With B in good hands, we had the rest of the day to ourselves. As options are kind of limited, when it comes things to do in Flint with kids, K and I ended up taking little KJ and J to the Flint Children’s Museum.   This is located downtown, near Atwood Stadium and Kettering University. This area is actually nice. Vibrant maybe isn’t the correct term. Let’s go with active and up-and-coming. On first glance, the Children’s Museum is pretty unremarkable on the outside. We had to double-check to make sure that we were at the right building. Once inside, though, holy Michael Moore-ly, is this place tons of fun for kids!  It reminded me of Rochester’s The Strong Museum Of Play. There’s numerous exhibits, all designed to bust out your imagination and curiosity through hand’s on play.  Many have an educational aspect, too.

We were there for hours, and KJ didn’t want to leave, which is always a good/bad sign. I had a coupon, so it only cost us about $10 in admission total, which was a steal. It’s such a simple, nice concept for a play centre that any city (cough, cough, Hamilton, cough, cough) could learn from it and implement it. If you’re looking for things do in Flint with kids, I do suggest hanging out here.

Any place with mirrors that slim me is alright, in my books.

After our outing at the Flint Children’s Museum, we eventually made our way out to the suburbs, Grand Blanc, to pick up pizza for dinner, from Da Edoardo.  This area didn’t feel or look like the same Flint at all, and I felt like I should have been wearing a tuxedo, when I entered Da Edoardo. The dichotomy between downtown and the suburbs can be quite striking in some cities, and Flint is no exception.

Later on that night, back at the hotel, I was chit-chatting with a few other Hamilton parents, whose children were there for hockey. The conversation turned to billets, naturally.  They then told me something which I never realized. Billeting in the hockey community was common, one person said. The community is tight knit,  and everyone looks after one another.

That was it then, for the Canusa Games, too, wasn’t it?  I had been looking at the whole thing all wrong the entire time. I couldn’t get how two large, flawed cities could expect to keep kids who don’t live there safe every year. The thing is, the Canusa Games is like a 60 plus year old community in these cities, and it’s a community which protects their own, and looks after each other.  Instead of focusing on the negatives, I should have considered the many positives of the games and Flint, which really weren’t that hard to find. To paraphrase Joel Embiid, I should have just trusted the process.

The next day, at the Closing Ceremonies,  Canusa’s motto of “experience the friendship” was on full display.  There was no separate congregations, as yellow shirt-wearing Hamilton athletes mixed with blue Flint ones. Lots of pictures were taken, and lots of contact information was exchanged, for keeping in touch. B was safe and sound, with memories that will last his whole life.

We met his billet one last time, the woman who I expressed so many doubts about prior to the weekend, but who generously housed four random kids, and literally even gave B the shoes off of her son’s feet (he had outgrown a pair of Jordan’s, and they were just going to throw them out). K asked how B was for her, and the billet replied “OK”.

In parent-speak, OK is what you say when you don’t want to say bad! So, you mean to tell me that I was worried about whether Flint, Michigan was good enough for my precious nine year old boy, when in the end, my boy wasn’t good enough for Flint?!

Isn’t it ironic? Don’t you think?

Anyway, next year’s Canusa Games are in Hamilton, and B has already expressed interest about participating again. If you’re apprehensive about billeting, like I was…..take a deep breath and trust the process. And if you somehow end up sending your kid to my house, don’t worry, B will be more than OK.