A few months ago, I told y’all about The Shot a.k.a. that time when B requested that I hit him a foul ball, and, despite severely lacking any baseball skills, I somehow did it. Well, all good stories deserve a sequel.  Today, I’d like to tell you about the time recently when B called his shot. Let’s file it in the stories about self confidence section of the internet.

Lemme set the scene. It was a clear black night, a clear white moon (word to Warren G!). Me and B were on the street…..walking to the Rogers Centre. I had scored a pair of wicked, first row seats to a Toronto Blue Jays – Baltimore Orioles game, which B had been excited for weeks about. He was going to stay up late on a school night to eat junk food, watch the Jays up close, and, most importantly, he was going to catch a foul ball!

You see, in his mind, catching a foul ball at a recreational, co-ed three-pitch game is cool…..but snagging one at an actual Major League Baseball game is way cooler. So,  leading up to it, B  had been nonchalantly mentioning that he was going to catch one. Not hoped to. Not wanted to. He was GOING to. The day before the game, at school, he even drew a picture, and wrote (I’m paraphrasing here. I don’t remember the exact words.)  “I’m going to the Blue Jays game tomorrow.  I’m going to catch a ball.”

Now, we’ve seen the Jays play in person several times, but B had never made such a bold proclamation before.  Accordingly, I tried to temper his expectations. The stadium would be near capacity (close to 50,000 people).  Say 40 balls end up going into the stands. The odds of us getting one just weren’t very good. Nonetheless, B remained unfazed. As a parent, you hate to see your kids be disappointed about anything, especially when their hearts are set on it. However, if they are undeterred in spite of your opinion,  then what can you do? Make no mistake about it, B was undeterred. 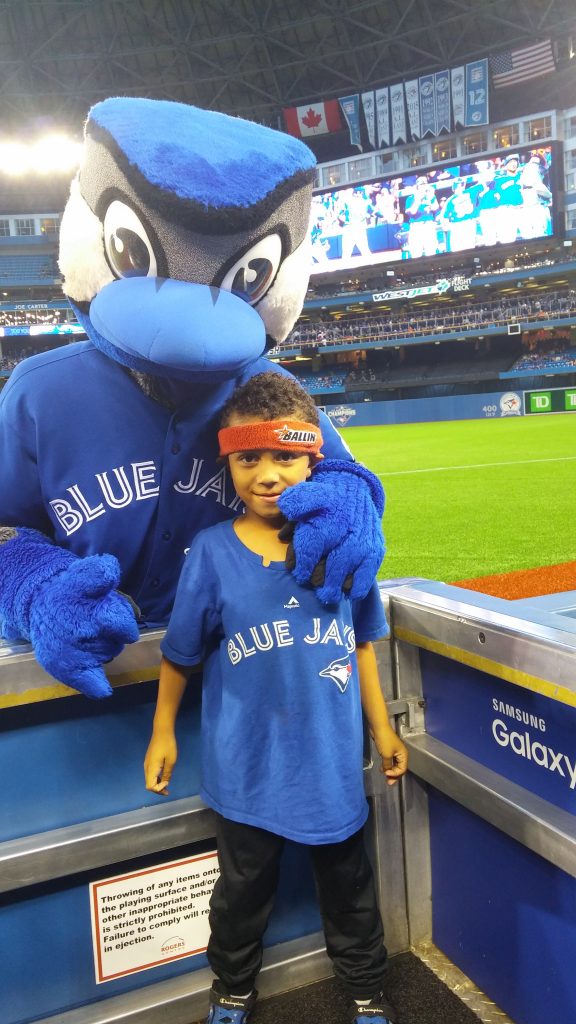 At the game, B spent the better part of five innings in a ready position. That is, whenever a ball was hit, he would jump up and raise his baseball glove, in preparation to catch a pop fly. While several foul balls whizzed by, none landed close to our general vicinity. No biggie to B. His only concern was the possibility of getting hurt if he didn’t get his glove up fast enough, when a ball came to him.

In bottom of the sixth, the Jays’ catcher, Russell Martin, came to the plate.  After a pitch or two, he ripped a foul ball down the first base line, right towards our section. Once it neared the stands, a man reached over and grabbed it. He then turned to B, and pointed the ball at him . While B stared at the guy, dumbfounded,  I held my hand up, and he tossed me the ball. To make it official, I then flipped it up to B, who happily caught it. The look on B’s face after was priceless.  Unsurprised disbelief turned all the way up probably describes it best. He said that he would do it, and, against all odds, he did it. B called his shot. He caught a foul ball!

Now, I don’t know about you, but I’m a pretty pessimistic dude. Children, however, lack this. In their eyes, as Kevin Garnett said, anything is possible. When a kid makes a crazy statement like they’re going to catch a foul ball at a jam-packed stadium, maybe we, as adults, shouldn’t be haters. There really is something to thinking a big idea, telling yourself that you are going to make it a reality, and then making it a reality. Betting on ourselves is something we all probably should do more of.

OK, real talk over.  Told you that this would be one of them stories about self confidence .Later, peeps.

Go catch a foul ball or something, will ya? 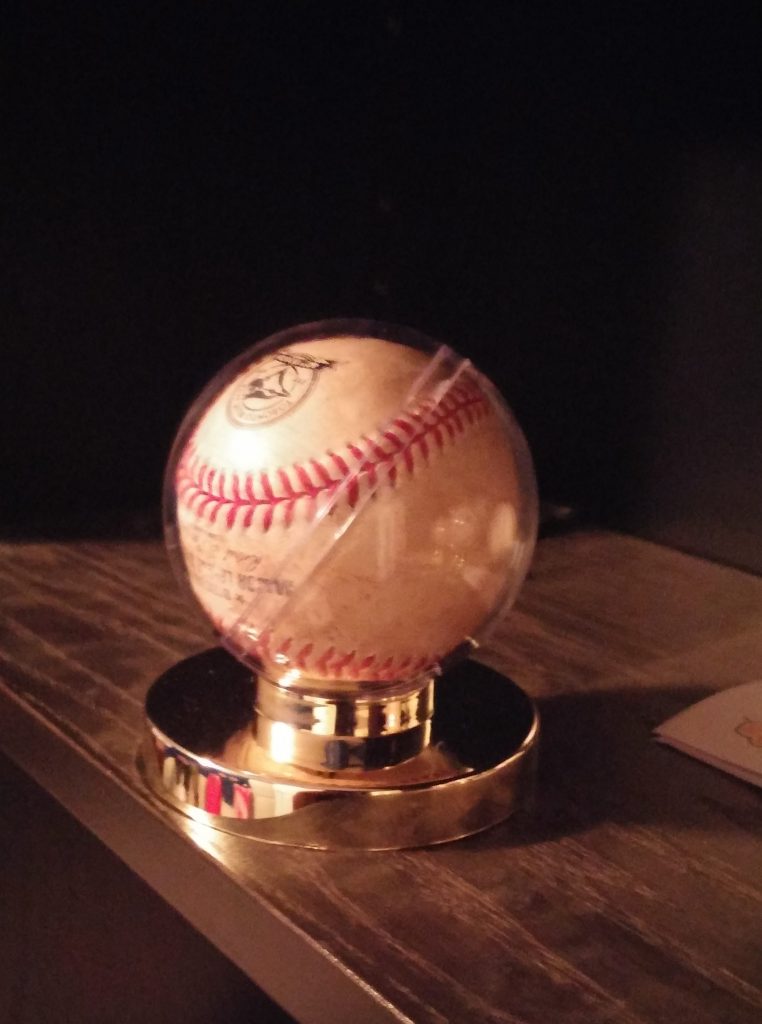 A pic of the ball. Despite what B says, RA Dickey did not sign it.