My good friends at Visit Harrisburg and Hershey generously invited us to explore the area recently, as part of their incentivised Media Days program.  If you’re thinking of doing a road trip this summer with your family, making the drive deep into the heart of Pennsylvania is definitely worth considering!

For us, it was about a seven hour ride with stops, because, well, kids. It’s a nice drive, though, as it’s pretty scenic. 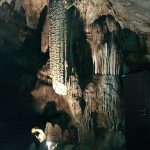 Since it was kind of on the way to the hotel, and because we wanted to walk around after being in our van for so long, the first place we checked out was the Indian Echo Caverns at Echo Dell.

This is a limestone cave, located in Hummelstown, which also has a playground and petting zoo on site. Upon descending down a long flight of stairs (which feels longer when you ascend them afterwards, especially if carrying a one year kid, like I was), we were given a guided tour into the caverns.  The tour took about 45 minutes, and I was amazed at the various formations. It was really cool (no, for real, the temperature inside was 52 degrees), and our guide was entertainingly knowledgeable.  He also unintentionally took our best/worst family photo ever:

We next made our way over to the hotel, The Central Hotel And Conference Center, in Harrisburg.  For our purposes, this is a perfect place to stay, as it is in a central location to any place that we want to visit. Hershey, for example is about 14 miles from Harrisburg, so only about 20 minutes away from the hotel. I also understand that since Hershey is more of a known tourist destination, actually staying at one of the official Hershey lodging options is a bit expensive. If you don’t mind the short drive, I’d recommend staying in Harrisburg instead, and saving a few bucks.

After dinner, it was time to satisfy our sweet teeth, as we headed over to Chocolatetown USA, to visit Hershey’s Chocolate World.  This place had all kinds of delicious, fun things to do, and also a store with the huge selection of Hershey’s goodies. Parking is free for up to three hours, which is plenty of time to enjoy a bunch of the attractions. We all did the Trolley Works tour, where we rode a trolley though Hershey and learned about the history of the city, while also sampling some chocolates. K and the kids then went on  the chocolate making tour (note: this is free, plus you get a chocolate sample at the end).  I went to unleash my inner Milton Hershey by creating my own candy bar! 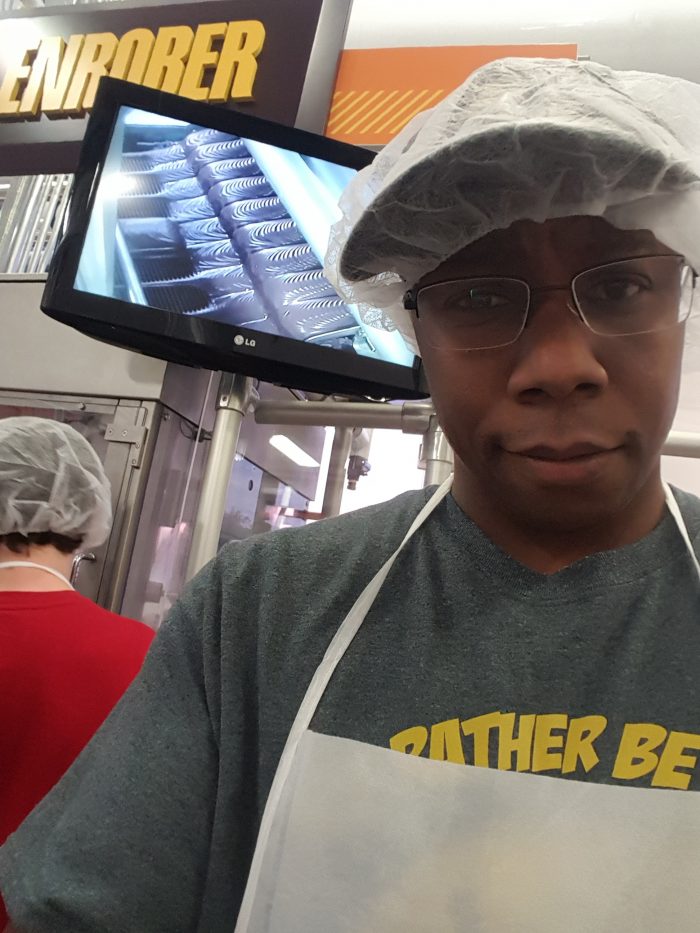 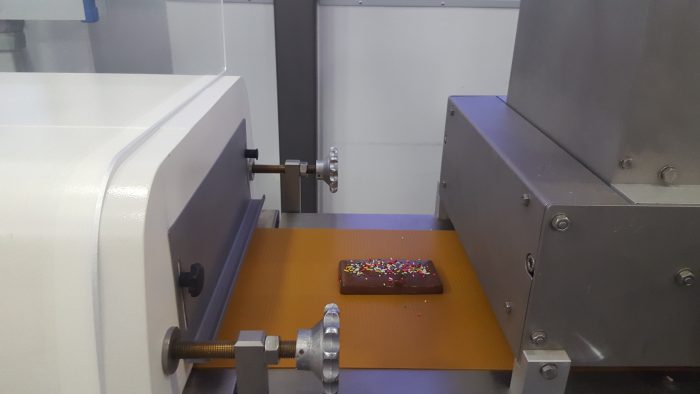 Despite being tasty, The Daddy Realness bar will not be hitting store shelves any time soon.

The next day was spent at Hersheypark. For the uninitiated, this place is a Hershey’s themed family park, which has an amusement park, a water park and a zoo in it. 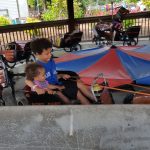 Our plan was to hit up the water stuff in the morning, and then do the dry stuff in the afternoon, as we figured (correctly, as it turned out) most people would do the opposite, so the lines wouldn’t be as long. We tried to jam as many rides in as possible, but the place had over 70 of them. We barely made a dent. The selection was great, though, I gotta admit. They ranged from ones that KJ (a Hershey’s miniature, according to the height guide) could go on and enjoy, to ones the thrilliest seeker would like. Fahrenheit in particular, had me looking up at it, shaking my head in disbelief.

Another nice aspect of the amusement park was the layout. I’ve been to parks that had a ‘kiddie section’, with the ‘adult’ rides at a separate spot. At Hersheypark, though, everything is mixed. So in theory, the parents could go lineup for a ride, while the kids went on a different one nearby. My kids are too young to do this, admittedly, but it’s a good thought.

One other thing to mention. You should keep an eye out for the various Hershey characters throughout the park. J was lucky enough to be picked to play in the travelling Character Game Show, where she won a prize! 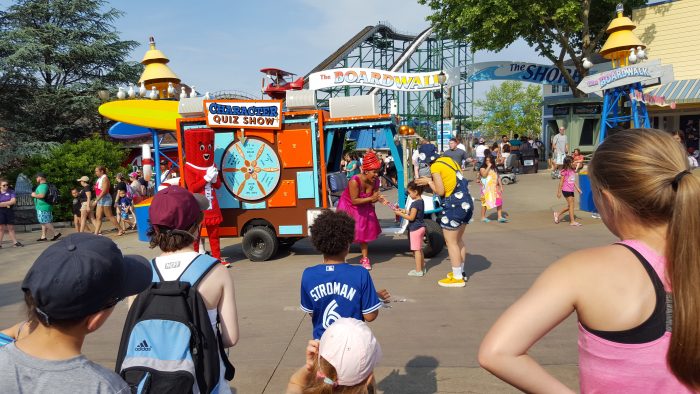 East Coast Waterworks was easily the favorite attraction, among my fam. It’s a kid friendly water play area, with lots of slides, tunnels and toys. We spent at least an hour there. I’ve noticed that I’m more of a chicken nowadays, when it comes to thrill-seeking, so my favorite ride by far was the lazy river. All in all, it was jammed-pack, exhausting day at Hersheypark, and we didn’t even make it over to the zoo! 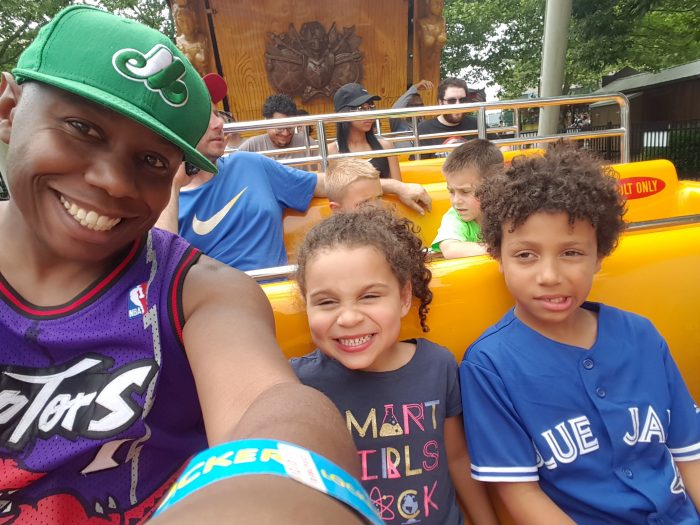 The following day started with a visit to Hershey Gardens. In addition to the 23 acre botanical part, it also houses a butterfly atrium.  Walking through the atrium was quite an experience. I’ve never seen so many butterflies before! There were dozens and dozens of different kinds, from all over the world, freely flying about.  I will say that they kept the temperature hot in there, which had me feeling like Nelly in 2002.

Afterwards, we made our way outside, specifically, to the Children’s Gardens.  We followed the pathways while going past various gardens, many of which were interactive in nature. It unfortunately started to rain, so we didn’t check out the rest of the grounds. I’m not exactly a flower enthusiast, but I’ll vouch for the beauty of the Gardens as being something everyone can appreciate. 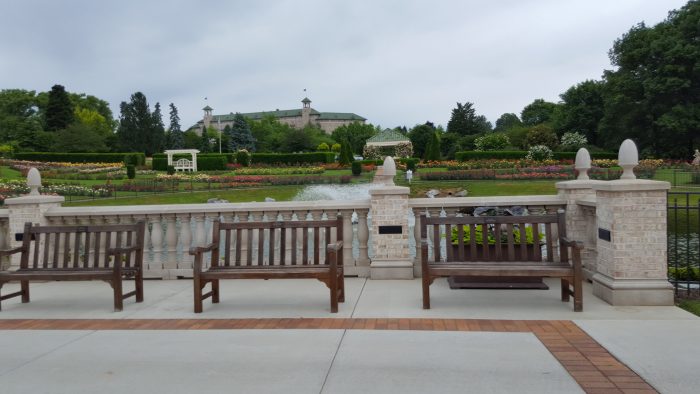 Afterwards,  it was time to go on a boat ride. Since Harrisburg actually lies on the Susquehanna River,  we took the bridge to City Island, to take a cruise on The Pride Of The Susquehanna. The Pride is one of only six authentic paddle wheel riverboats in the USA (so paddles only for steering and propulsion). Besides driving like a throwback, the interior is decorated as such, too, giving it an old-timey vibe. 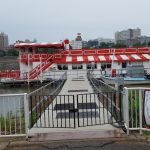 The sightseeing tour that we went on was about 45 minutes long.  I’d like to say that we relaxed and enjoyed the views while listening to the recording explaining the history of the river and Harrisburg. But, you know, kids. B and J were more excited about being on a boat than The Lonely Island ever was (note: T-Pain was not on the Pride).  They ran around like maniacs, getting excited about the littlest things (“HEY DADDY! LOOK! THERE’S A BATHROOM!). You were also able to buy some snacks on board, if that floats your boat (this fact really floated B and J’s boat). 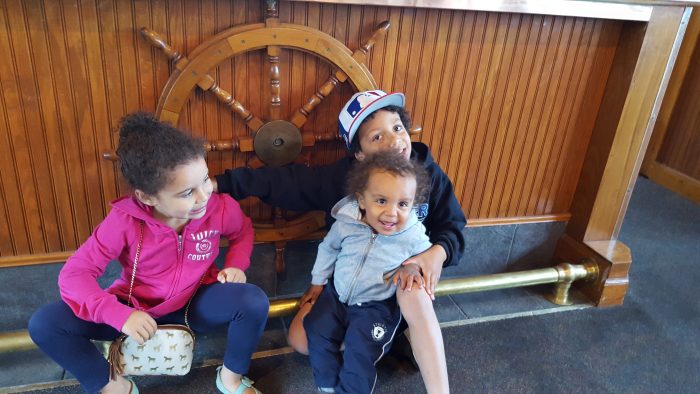 After docking, it was time to hit up downtown Harrisburg. To be honest, it wasn’t quite what I expected. There were definitely some nice old buildings, like the Pennsylvania State Capitol, and a bunch of cool looking restaurants. Like most major cities, though, I get the feeling that you probably don’t want to be in certain streets when it’s dark. That’s not to say stay away from downtown, obviously; I’m just saying it feels a bit uncomfortable in certain spots during the day, but totally safe for the most part.

One of those safe places is the Whitaker Center. I loves me a good science center, and the Whitaker fit the bill. Three floors of over 200 hundred hand-on, interactive exhibits? Yes please! Kidsplace, in particular, was a favorite of KJ’s. 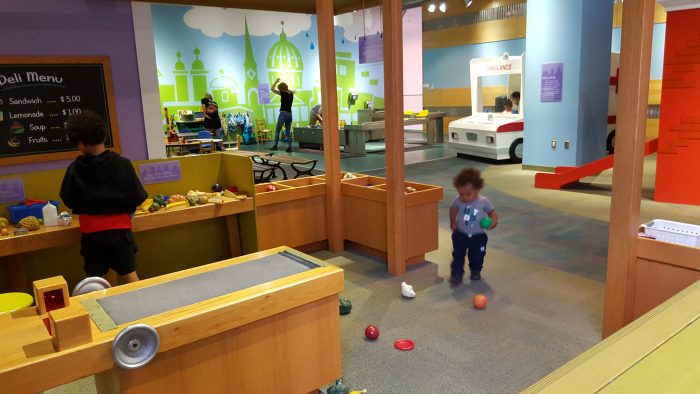 B and J really liked building cars and paper planes in the Move It! section. K and I had fun trying our hands at making stop-motion animated movies in the Backstage Studio. While my attempts predictably sucked, K apparently is Walt Disney’s grandchild or something, as she made a couple of mini masterpieces.  The Whitaker Center also has a cinema with a huge 38’x70′ screen, if you want to catch a flick, as well as an intimate performance theater.

Not far from the Whitaker is the State Museum of Pennsylvania, so we headed there next. This museum is very comprehensive, in terms of covering different periods in Pennsylvania history. 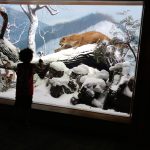 It was hard to soak in as much as I would have liked (because, you know, kids), but it was still a worthwhile visit.

KJ loved the baby/toddler Curious Connection area. It’s the type of place where I saw a tunnel, so I was like, yo, I wonder where that goes. The next thing I know, I was on my hands and knees crawling through it like I was Andy in The Shawshank Redemption, and I ended up in a playhouse. Just a fun environment to put your little one down in, to let them explore. The rest of us liked the third floor the most, with the various animal and dinosaur exhibits.

Our last stop on our trip was my personal favorite. I was hoping to catch a Harrisburg Senators minor league baseball game, but alas, they were out of town. However, we got the next best thing – a private tour of their stadium, FNB Field! The team’s general manager, Randy Whitaker, generously took some time out of his day to show us around. FNB Field is located on City Island. It is unique from the other stadiums, because how many stadiums are even on an island?! Besides this, the coolest part is their Life Sized Bobblehead Hall of Fame.  It features numerous Harrisburg Senator legends. 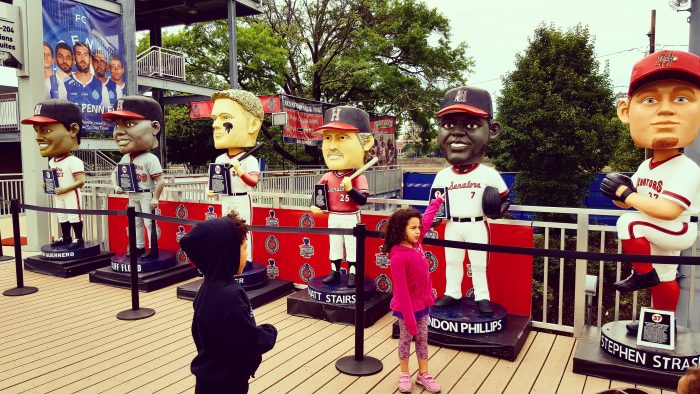 All in all, it was a great trip!  Hershey on it’s own was awesome, but besides the Sweetest Place On Earth, our experience in Harrisburg was positive overall, too.