Note: While this is a sponsored post, the opinions given are 100% my own.

My kids love handheld devices. If given the opportunity, I am sure that B and J  would mess around on them for days at a time, uninterrupted. If given the opportunity, I am also sure that they would eat ice cream 9 days a day. Regardless, we obviously monitor and limit their usage on the devices.  This does present some challenges, especially when it comes to gaming apps. Ideally, whatever it is they’re playing would have lots of educational value, and not just be mindless timekillers. Once they get it into something, they really get into it, you see, so their engagement levels are through the roof sometimes.  The problem I’ve had is finding educational games which they’ll actually enjoy and engage in, instead of just the mindless ones. 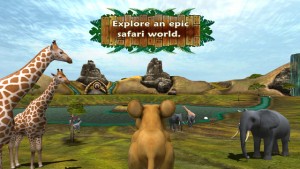 Now, that’s where Safari Tales comes in. Developed by Kuato Studios for 4-10 year olds, this is a pretty sweet game. Basically, you select your character (you start with a baby elephant, but can find others eventually, to play as them) and then you’re free to roam an African savannah. Because it’s a 3D world, you are really encouraged to explore the environments. The key to Safari Tales is that it enhances literacy skills.  Throughout your adventure, you play various mini-games, and collect artefacts. Along the way,  you learn numerous facts and figures about the environments and their inhabitants.  One neat feature is that your session is recorded while you’re playing.  Then, at the end of it, an interactive storybook is created, so you can read about about what you did, on your adventure. 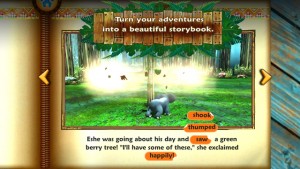 Going back to what I was saying about monitoring device usage. Safari Tales has an option called Parent’s Corner, where you can personalize the game to your child’s liking. For example, you can adjust the reading age accordingly. As well, you can pick the session length, so playtime doesn’t go on and on! 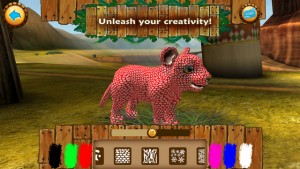 We downloaded this game onto our iPad.  While it was a bit tough for J (who’s three years old), B (five years old) loves it. He especially likes interacting with the character, Darwin, who’s a meerkat. Darwin’s almost like a guide, in that he helps lead you through the game. However, at any time, you can also ask him questions, by selecting words, to form proper sentences. Darwin will then speak the answers to you. As far as I can tell, all of the Q &A is related to facts about the animals or the environments, which is pretty cool. Sometimes, B doesn’t even play the rest of the game, and just kills time talking to Darwin! 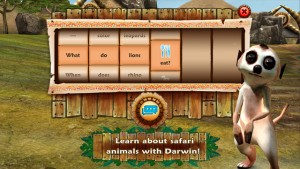 Overall Safari Tales is one of the better downloadable educational games that I’ve experienced.  It’s fun, easy, and engaging, with graphics that are top notch. It’s reasonably priced, too. Definitely recommended for young kids.

https://daddyrealness.com/ View more posts from this author
« What Do You Mean?
Cool And Unique Gifts For Kids! »