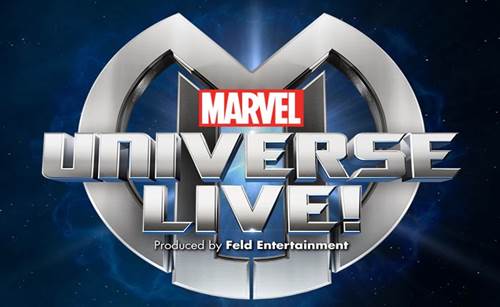 So I checked out Marvel Universe LIVE! last night, at the FirstOntario Centre in Hamilton. I can honestly say that it was unlike anything that I’ve ever seen before!

B had been pretty pumped for the show, for weeks. However, despite being corrected repeatedly, he insisted on calling it “Marvel on Ice”. When we arrived, any disappointment that he had about the lack of ice was immediately replaced with awe, as he was amazed with the elaborate stage set up.

I was impressed with the variety of people in the crowd. While it was mainly composed of families with small children, many of whom were dressed up as their favourite Marvel characters, there was also a fair number of older teenagers/adults without any kids. The appeal of Marvel really does span all ages.

That multi-generational appeal applied to the show, as well. Without giving away too many details, the best way that I can describe it is that is like one of the recent Marvel movies come to life. Basically, Loki was being a really evil power-hungry prick, and needed to be stopped by a bunch of superheroes. In terms of the dialogue, action sequences and special effects, all were top notch. B was a bit too young (5 years old) to really understand the plot, so I had to explain the story to him as it unfolded. I even chuckled a few times at some of the jokes (that went over his head, of course). I don’t think that he cared about the plot, though. He was really into the show, regardless. Between the pyro, lasers, and motorcycles, it really did get your adrenaline flowing. The fight sequences and stunts were very well choreographed, too (Black Widow busted out a sick Frankensteiner, for any wrestling fans out there).

You know that old commercial tagline, about paying for the whole seat, but only needing the edge? The only time B sat was to stuff his face with food. He was standing or jumping up excitedly the rest of the time. It was cool, seeing him get caught up in cheering for the good guys as they kicked the bad guys’ butts. I should note that the fights weren’t too violent or gruesome/bloody  (that was a slight concern that I had, going in).

Another cool part was the sheer number of characters. There were 25, encompassing many parts of the Marvel Universe. Pretty much everyone that you’d expect made an appearance. 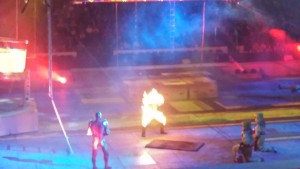 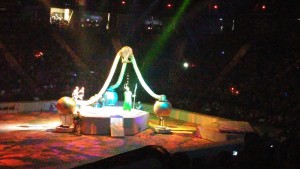 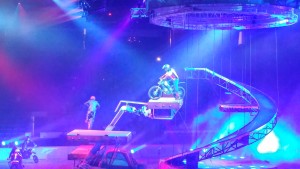 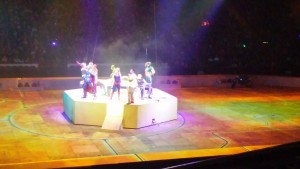 The biggest crowd-pleaser (and B’s favourite) was the Hulk. He was huge, yo! 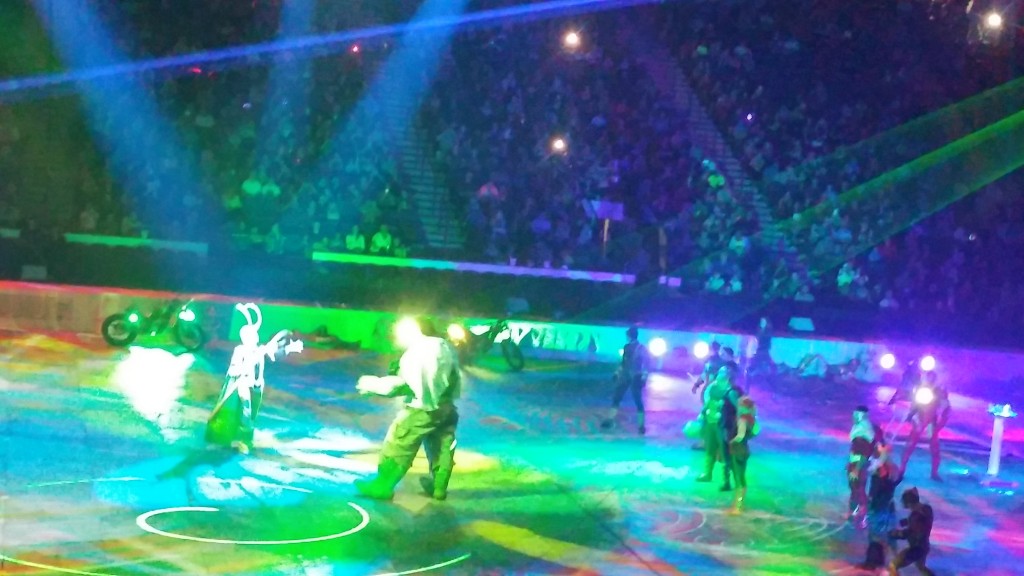 With intermission, the show wrapped up in about two hours, which was the perfect amount of time.
Marvel Universe Live!  greatly exceeded my expectations. I would say that if you’ve enjoyed the Marvel films from the last few years, you’ll really like this show. Even if you’re not, there’s so much going on, that you’ll still be engaged. Marvel fans and non-fans – don’t be afraid to assemble, if this show comes to a city near you!