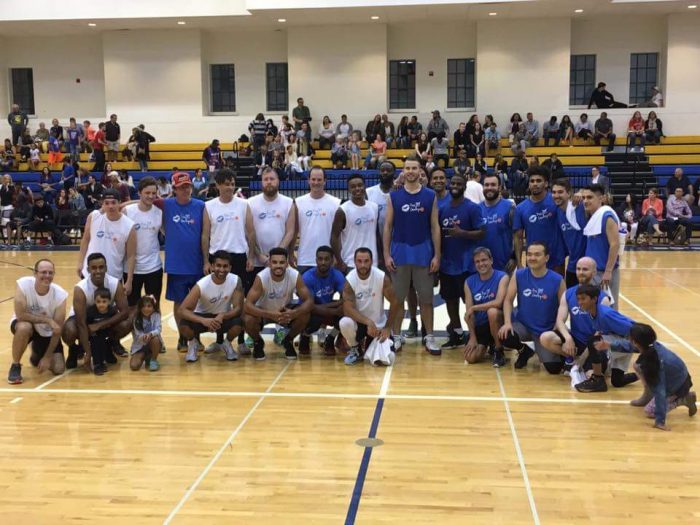 Had the pleasure of checking out a pulmonary fibrosis charity event with my son recently. Let’s backtrack a sec, however, before we get to that.

Incurable disease are the two of the scariest words in the English language. In a perfect world, if you are diagnosed with anything, there would always be an encouraging prognosis for it. We don’t live in a perfect world, though.

I guess that’s why  Pulmonary Fibrosis (PF) resonated with me, when I first found out about it. PF is a rare and fatal lung disease. Per the Canadian Pulmonary Fibrosis Foundation (CPFF)  website, if you have PF, your lung tissue become scarred and thicken. Over time, it spreads, and the lungs lose their ability to function properly, depriving your body of the oxygen it needs. In Canada,  approximately 30000 people are affected with this disease; deaths from it are projected at 5000 per year.

I heard about PF from an unlikely source – NBA player (and fellow Canadian) Nik Stauskas. Nik’s grandmother passed away after a long a battle with Idiopathic Pulmonary Fibrosis, and he’s been involved with raising awareness for the disease. One of the ways that he did this was by partnering with the CPFF to host the Kiss IPF Goodbye Charity Basketball Event recently . I heard Nik promoting it on a local sports radio station, and decided that B and I should check it out.

Now, truth be told, B was supposed to have a meet and greet with Nik before the event started, including some court time. B was obviously pumped for this, and wanted to show off some of his moves in front of an NBA player. Unfortunately, due to the joys of Toronto traffic, we were late in arriving, and missed out on this opportunity #dadfail. Fortunately, Nik did still give us a few minutes of his time, which redeemed me a bit, in B’s eyes.

Now, truth be further told, my real intentions were to treat the event as a learning experience for B.  Being charitable and generous are important traits to instil in a child, and I figured this was a cool way to show B examples of this, while supporting a great cause. 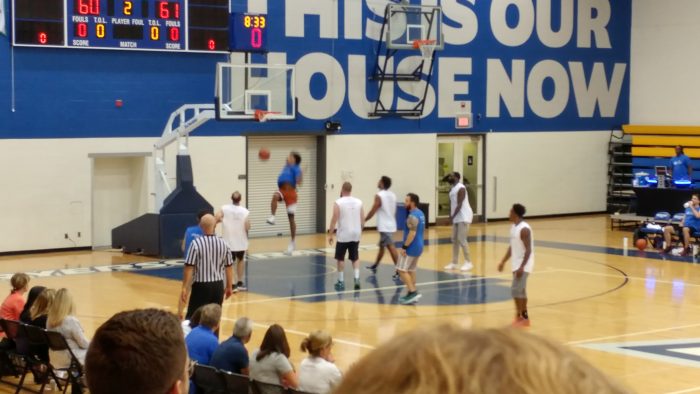 The event itself was a lot of fun. The game featured a mixture of  mainly local celebrities, and people who paid to play. They all put on an entertaining show. B got super into it, and was impressed with the hops on a couple of the players (as was I).  The Toronto Raptors Dance Pak were even there, to hype up the crowd! The game went to overtime, too, believe it or not, as the participants really stepped up the competitive level late in the proceedings.

In the end, I think a good amount of  money was raised for the pulmonary fibrosis charity.  I know a lot more awareness was raised. On a personal level, I think B’s eyes were opened from the experience, which was a positive takeaway from attending.

Hopefully, the organizers were happy with the results.  Hopefully, the momentum can keep building towards finding a cure for PF one day.