As much as I enjoy hanging out with the family, I do also enjoy occasionally not hanging out with them, too.  |Especially if Pringles ketchup chips randomly happen to be involved. However, with two small kids, a baby, and a pretty hectic  lifestyle, this isn’t easy to do.

Which is fine, obviously. No complaints here. It just means that whatever non-family time I have needs to be taken advantage of, to the fullest.

Yesterday, for instance. A buddy and I had made plans a while ago to go to the Toronto Blue Jays – New York Yankees game. However, earlier this week, I saw this press release come across:

Holy random, Batman! Now, there’s a lot going in that release. Like, unexplainable, how did someone even come up with this combination of stuff, levels of randomness.  Pringles ketchup chips were definitely making a….splash?

Nonetheless, since it was happening before the game, near the Rogers Centre, and I was in the area anyway, I figured that it was worth checking out. After all, I’ve never been apart of a world record before….or experienced a Brett Lawrie  hosted affair….or been able unleash my inner french fry and get dipped in ketchup….or even felt the urge to unleash my inner french fry. Anyway, a lot of my boxes were checked off, in terms of time being well spent, so off I went. 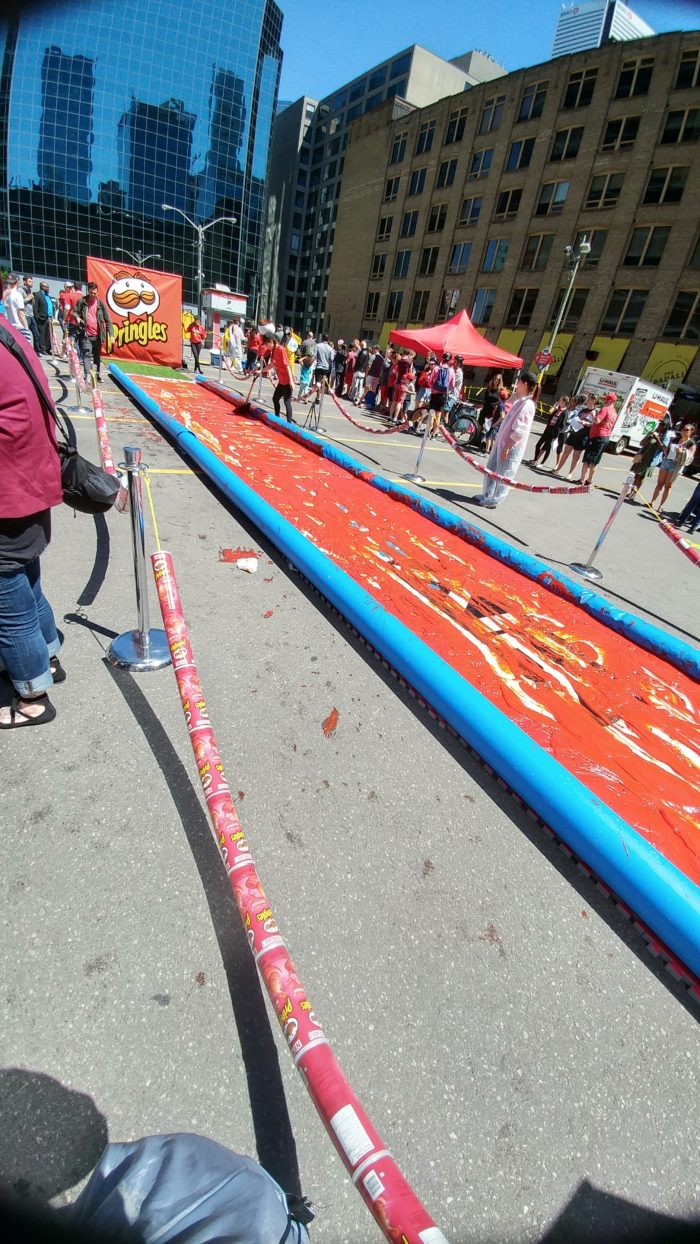 In all honesty, the event was an interesting spectacle, but it wasn’t quite like what I expected. I knew that coveralls would be provided on site, to keep your clothes clean. This was key, since I didn’t want to have to spend the afternoon at the ball game covered in ketchup stains. However, for some reason, I pictured the slide being like a playground style one, with steps and stuff. The fact that it was a flat, Slip N Slide one threw me off.

Then, my experience with those slides was that you needed a running start, to get enough momentum to go the whole length. The thing is, the one at the event didn’t allow for much space. As such, I saw people taking a few steps and belly-flopping, ketchup spraying everywhere, and gliding a few feet before getting up and either walking the rest of the way, or belly-flopping again. Anyway, the end result was people were still getting really messy, underneath their coveralls, and all on their faces. It did look like everyone was happy about being drenched in the sticky sweet condiment, though, and there was a decent sized crowd of people willing to take the plunge.

I, unfortunately (fortunately?), chickened out. Keeping my threads looking fresh to death won out over being a record-breaking human french fry. Pringles did make sure to have free samples of the ketchup chips available, which I’ve tried before, and are pretty tasty. Oh Canada, indeed. I also got to chat with the host himself, Brett Lawrie.

Yes, I’m rocking my Lawrie jersey, by the way, because that seemed like a cool thing to do. Missing from that clip is a question my son B had for Brett.  It was, when he was a little kid, what team did he want to play for when he was older (Brett’s answer: he didn’t have one, he just wanted to play baseball).

So all in all, I have no idea why that event went down like it did.  It happened, and I went to it. Time well spent? I don’t know. It wasn’t a waste of time, though, that’s for sure.

The aftermath of today's @PringlesCA #KetchupSlipperySlide event. Fun times, but I feel bad for whoever is on clean up duty! pic.twitter.com/L9e6Zkz84r