I need to come clean about something.

Not too long ago, our family was homeless. We were homeless for quite a few months, actually.

I need to come clean about that.

See, an opportunity came up which we thought was too good to pass up, to purchase a brand new house,  built from scratch. The catch was that we needed to sell the home that we already had first, to go towards the funding of  it.  When we completed the sale, construction of the new house started,  but the closing date on it was like six months later.  So, after we moved out, we were technically homeless until we could move into the new place; we didn’t have a fixed address.

For a couple of months during this period, we stayed at my father in-law’s house.  He was cool with it, and I’m sure he liked the company. Nonetheless, that was still the definition of super-imposing. Taking one person in is a big commitment, let alone four.  If you look up super-imposing in the dictionary, you’ll see a picture of my father in-law standing at a window frowning, as K, J, B and I walked up to his house carrying our suitcases.  To be honest, the situation felt like the premise for a bad sitcom.  Just watch the hilarity when a grownup daughter moves into her neat-freak dad’s place, with her wild n crazy kids and her smooth,  funky fresh, fine, wise-cracking husband who has a heart of gold!

Obviously, we couldn’t stay there for the whole six months. And this put us in a bind. We didn’t have any other family to turn to, so where do you live when you’re only looking for something for a few months? We looked at apartments, but everything required a one year lease. We looked at home rentals, but the only places that we could find were crazy expensive, or crazy sketchy (I checked out one house, and then as I was leaving and going to my car, I walked past a prostitute. Pimpin’ ain’t easy, but that’s not a lesson I want to teach my kids yet). We looked at the YMCA (I heard it’s fun to stay there). We looked at hotels. We looked at running away and joining the circus or becoming carnies. No go to them all.

Finally, K found out that the local college rented out its dorm rooms in the summer, and that they had a long-term resident program. Each room had two bedrooms, a kitchenette and two TVs.  Housekeeping, as well. It was near the important shopping areas, and parks, too, for the kiddos. No long term contract, either, just pay by the month.  So, yeah, man,  that’s right, to avoid living on the streets, the four of us stayed in a dorm room for the summer!

And honestly, it wasn’t so bad.  The kids had a blast. They got a kick out of living in a ‘hotel’. They especially loved going to the ‘movie theater’ on our floor and hanging out there. Plus, it wasn’t like the place was crawling with partying, beer ponging, keg-standing students, either.  It really was quiet most of the time. Met a ton of nice people, too.

It wasn’t all fun and reliving my younger scholastic days, though.  On the real, kids are creatures of their environment.    B basically acted like he was on vacation the whole time. Hotel, motel, Holiday Inn, say what! The summer was spent with him seeing how far he could push us,  which was way more than usual. I needed to adapt my parenting methods accordingly.

Awww, who am I kidding.

The only adapting I did was, instead of pushing the buttons on the elevator myself, I let the kids do it. Regardless,  in such a confined, unusual setting, you do what you can as a parent, in terms of discipline and control, but you can only do so much.

One of the  main ongoing problems was (SHOCKER) the bedtime routine.  J would  need to be put down for bed early,  yet she shared a room with B.  If  we sent B to his room to play, he would inevitably get too loud and wake J. Or he would inevitably get bored of playing and find new ways to amuse himself, which typically involved getting into things, or trying to hang with K and me.

One time, he came running in all excited, just to hold his arm out and tell me how long it was. I mean, it’s not that I don’t care but………wow, I don’t know how to finish that sentence. Oh come on, don’t hate. When your kid does something not very interesting, you nod and mumble ‘good job’, too.  Never, ever bash them to their face, but deep down, you wish that they’d stop jumping up and down, or spinning in circles, or clapping their hands, or whatever regular thing they’re doing that they’re making you watch them do.  I know I’m not alone on this.  Now, if they were spinning circles while jumping and clapping hands, that’s different. Congratulations, too. If you’re looking for a circus for your little acrobat to join, message me, and I’ll refer you to some contacts that I found.

For all I know, one day in the future, B will be holding out his arm to show me his new tattoo, and I’ll miss the days when he was just excited about showing me how long his arm was, and I’ll start singing ‘Cats in The Cradle’ because the full meaning of that song will hit me at that moment, and B will walk away from me  shaking his head in confusion and hop on his Harley hovercraft or whatever people will be riding in the future, and float off into the sunset, and…….

Whoa, sorry,  back on topic.

B realized early on that we were screwed at how we could control him, while living in rez (yeah, the hip kids call residence rez.  Gimme my hip card! ).  He had some moments there that were real doozies (no one says doozies anymore? Hey, where are you going with my hip card?).

Take one eventful evening, for example.

2) Nothing on TV, plus B was hanging out in our bedroom. I figured I’d watch a totally kid friendly film….Semi Pro. Wait, it’s not appropriate at all!  So that didn’t last long. Before I turned it off, though, B did find his microphone and sang along to ‘Love Me Sexy’ by Will Ferrell. Later, he also jumped on my back and sat on me like a horse a bunch of times:
Me – ‘Why do you keep doing that?’
B – ‘Because I like this movie.’ 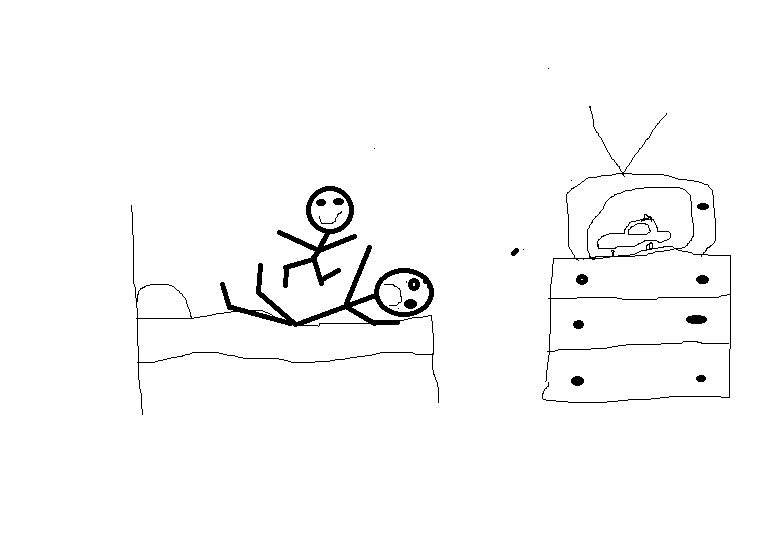 Next time you’re sitting and enjoying a video with a friend or significant other, randomly start to ride them like they’re Seabiscuit.  Why? Because you like the movie.

3) And no he didn’t like it. B got bored, and watched Curious George on the Playbook instead. At some point, he noticed that George had a TV tray, like his, and he went off to find it. He was giving me the play by play while’s looking for it (‘I’m going to look for it!’ ‘I found it!’ ‘I’m going to carry it!’ etc). I kinda tuned him out, because he’s no Al Michaels when it comes to giving the play by play. At some point, I thought he said that he was going to set it up by my feet, at the end of the bed. Anyway, I should have paid more attention. I go to stand up later, and yup, I stepped on the tray, and hurt my foot. Ouch.

4) J woke up screaming, so I went to the kid’s room to calm her down. She was wide awake, not going to sleep anytime soon,  so I chilled with her in the bed in their room. B sauntered in eventually:
B – ‘Now, if you need help calming J down, just let me know and say my name! And I will come and help you.’
Huh? Who’s the parent here?!  Literally 10 seconds later, J started  whining, so I called the dad in training over:
Me – ‘OK,  B, can you come help me calm her?’
B (in a serious voice) – ‘No.’
He left and  closed the door behind him.

6) Instead of waking up to my usual obnoxious alarm (that week: WWE wrestler Fandango’s theme), I woke up to a loud thump and crying at like 5:30 AM. B fell out of our bed.  Didn’t hurt himself, don’t worry!

That night’s winner? Esprits Criminels? That show has a new fan, apparently.
That night’s loser? Me.

Anyway, we did move out of rez life before the school year started, and eventually into the house that we currently live in, which ended our homelessness.  And B and J have adapted just fine. No more nonsense, for real.

OK, OK, I need to come clean about that, too……another time, though. 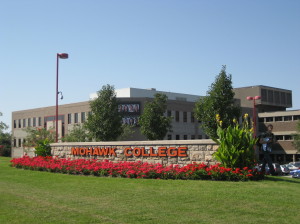