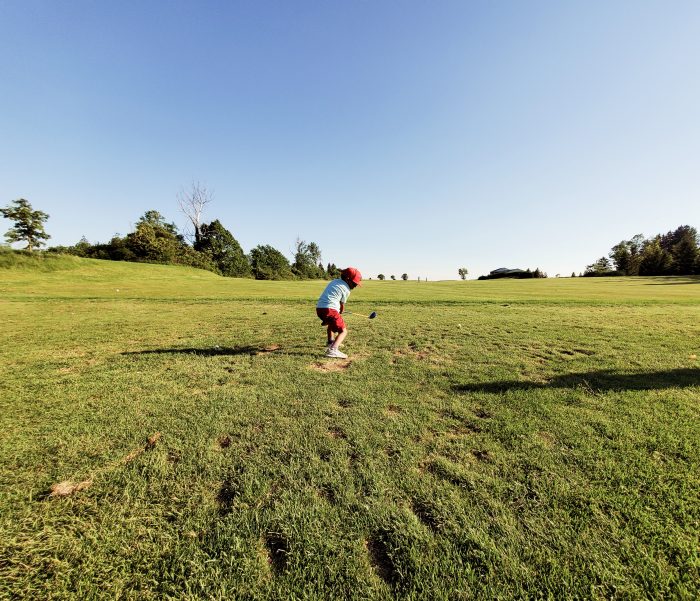 Some quality time golfing  makes for a great gift! My suggestions go downhill from here, though…..

Hey, hey, hey!  Father’s Day is just around the corner. Now, if you have come here looking for the perfect Father’s Day gift for the father figure in your life…..you have come to the wrong blog. Way more reputable dadfluencers have probably got that covered. What I do have, however, are some not so perfect Father’s Day gift ideas, inspired by some recent experiences with my kids.  OK, fine, this is pretty much an excuse to tell three random stories, to be honest. You’re welcome (or I’m sorry) in advance. Let’s go!

The pandemic continues to result in living a different reality around here than normal. And if you’re a child, what do you do if you’re tired of this reality? Well, in my house, it’s go all in on Roblox, and create a better virtual life!

For those who don’t know,  Roblox is an online platform geared towards kids,  with millions of free, safe, user created games.   In general, these games involve creating a character, and interacting with other users.  From what I can tell, the ability for customisation and socialising are big parts its popularity.

J was the first one here to start playing.  She would excitedly tell us about the new this, that she got in that game, or the new that, that she got in this game.  To get a better understanding, I started playing with her. It started with the game Brookhaven. I use the term ‘game’ lightly, though. In Brookhaven, you create your avatar, and then you do stuff like buy a house,  and get a job. You kill time by wandering around the city and getting ice cream, or going to the bank, or sitting on a bench at a park.  Then you go to bed.  You can use real bucks to buy Robux, to then get in-game things like decorations for your house. There’s no objective, really.

Brookhaven is like if Ned Flanders remixed Grand Theft Auto.

I don’t get the appeal, but kids seem to like it.

We then moved on to Eviction Notice, which is a Roblox version of Big Brother. Big Brother is my thang, and I’m a borderline BBCAN superfan, so I was digging the concept of this game, initially. Armed with years of gameplay ideas and strategies, I stepped into Eviction Notice with a solid plan. I tried to point out stronger players to J, and form an alliance, to get them out. I even bragged to myself about it in the Diary Room.

When you’re playing against children with characters who look like princesses, or Harry Potter, or pirates ,  I guess that was to be expected. I was immediately put on the block for eviction. Unable to save myself in the Veto competition, I was then voted out to be evicted.

J’s Roblox enthusiasm was contagious, and spread to B and J, who found their own games to mess around with. Currently, Adopt Me is the common game of choice among them, though.  From a parent’s perspective,  it’s nice that my 11, 9 and 4 year old all have found something to enjoy together.

Anyway, speaking of pretending, let’s move on to the next less than perfect Father’s Day Gift.

When I last discussed TikTok, I was warning about the perils of it, and how dangerous it potentially was, for kids. Since then….we totally let B have a TikTok account again. Yes, I understand that children probably shouldn’t have social media accounts for a variety of reasons. However, during the pandemic, the amount of B’s peers with TikTok/Instagram/Snapchat was staggering. K and I both reluctantly gave in to him having a monitored account, to stay in touch with people during quarantine.

Shocker, this turned out to be a terrible idea.  The problem was that even with monitoring, there were still a lot of ways to get around it, which we didn’t consider. B was basically a  human Public Service Announcement as to why kids should not have a TikTok account. It’s too much to explain here. However, you know those Russian dolls, where you have to keep opening them up, to find another doll to open up, and so on, before you finally get to the end doll?  That’s what it was like when deciphering what B was doing on TikTok.

And at the end, long story short, B had two TikTok accounts going. One that we knew about, and another one that we didn’t. That other one wasn’t just a typical account, though. It was a funny meme account, clearly created by a child,  of videos that he made or re-shared.  By the time that we discovered it, the account had been active for a few months, but it had almost 60,000 followers, with likes in the multi millions.

Some of his TikToks had millions of views!

There were consequences for the deception, of course. Afterwards, though, the business sense in me started to think of ways to monetize what B had created. With a little bit of parental guidance, editing and re-branding, maybe B could score some partnerships!

While researching about this, I also discover that there is a buyer’s market for popular social media accounts. Instead of starting from scratch, you could just purchase someone else’s account with their built-in audience, apparently. With dollar signs now firmly in my eyes, I  check B’s account, and see this greeting:

With dollar signs and Beezys now disappearing before my eyes,  I reached out to TikTok’s customer support. Days later, I received this email: 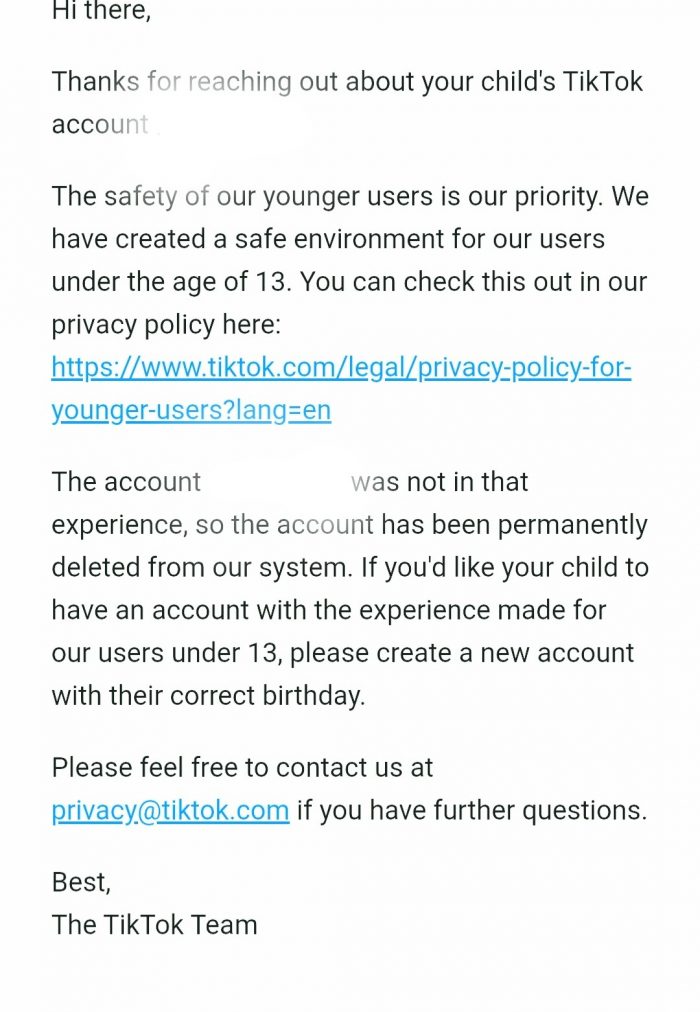 Sigh.  That sounds about right. Oh well.  Lesson learned, and B’s TikTok account is clearly not for sale.

And speaking of lessons,  that brings us to the last not so perfect Father’s Day gift.

KJ has gotten into playing with B’s old wrestling action figures lately.  Like father, like son, like other son.  He’s also into superheroes, so I get the logic of the larger than life wrestling personalities appealing to him.

KJ – IT DOESN’T MATTER WHY YOU WORK!

Later, after telling me that it didn’t matter why I wore my hat, him and his Rock action figure went to his room, to play. A while later, he came back to my work area, visibly upset.

Now, the important part here is that the toy Rock……doesn’t talk. It’s just a regular action figure.  KJ also can’t even tie his shoes yet.  What’s with the sudden tying proficiency? And did the Rock toy turn into Chucky?! I was confused.  When I went to his room, I discovered this: 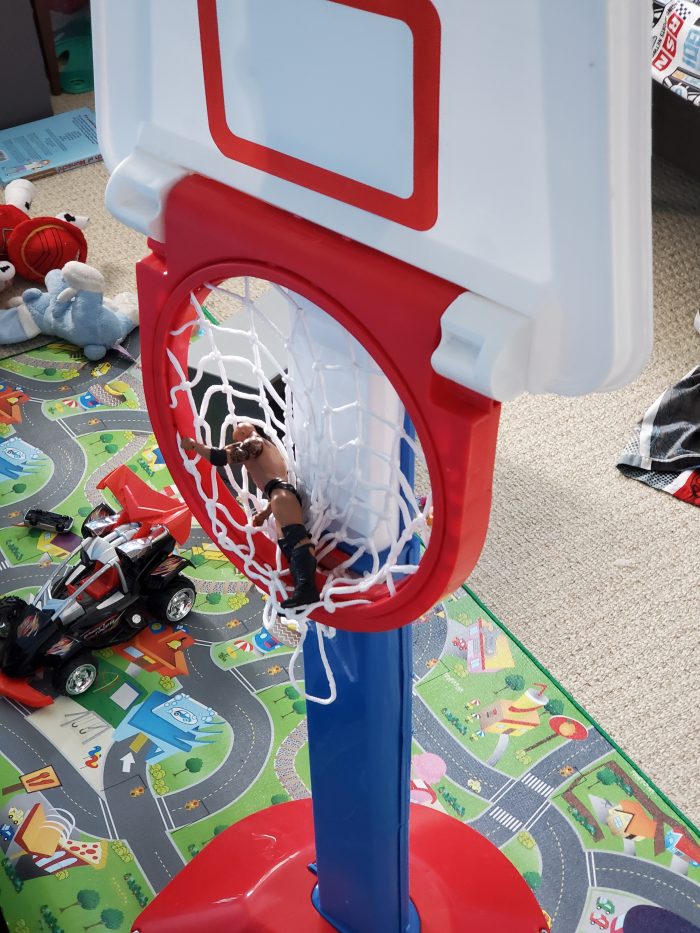 Well, that wasn’t as disturbing as I dreaded. Boy, I guess The Rock will know his role, and shut his mouth now, huh!

Sorry, Dwayne. I think that I know my role now, too, and that is to wrap this post up.