Ahhh,  fun packs.  A cereal variety pack. Those single serving sized boxes of cereal where  the box somehow functions as a bowl! 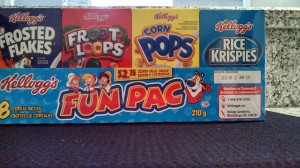 Now, when I was a kid, there was one thing that bugged me about fun packs: they would come in packages of 8 or 10 boxes, but it always seemed like for every one box of deliciousness, there would be two boxes of Crappios or Lame Flakes, or something like that. This wasn’t the case with  Kellogg’s Fun Pack Cereals, however. All of the boxes are winners. Frosted Flakes + Froot Loops + Corn Pops + Rice Krispies = edible supergroup.

Another good thing was the variety. B and J like Rice Krispies, for example, but they won’t eat a whole box of Rice Krispies, if that’s the only option.   With Kellogg’s Fun Pack Cereals, if they lose interest in one flavour, there is still  three other choices, and only two little boxes of each. This  is perfect  for kids like mine, who have the attention span of a…. I don’t know. Something with a short attention span, I’ve  lost interest in trying to think of a comparison.  Regardless, you get all of the benefits of eating cereal without committing to a big box of it!  If fun packs were people, they would be side pieces! Or booty calls!

Remember what I said, about the variety, and the kids having short attention spans? B and J apparently couldn’t decide on just one box, so they opened all eight. And not just opened. They took  them up to the playroom, and the ones that they didn’t finish eating (which was almost every box ) they dumped out, all over the floor.  You know, because that totally makes sense. Don’t worry, they made sure to walk on them, too, just to really grind the flakes, balls and loops into the carpet. It looked like a freakin’ Kellogg’s factory exploded in there. It is like the room got hit by a Cerealnado. Yeah, that’s right, a Cerealnado.  Hey, Tara Reid and Ian Ziering, have I got a movie idea for you!

Apparently, all of those fun packs didn’t exactly give B any energy, either. When I told him that he had to clean up all of the mess, he dutifully picked up a few pieces of Frosted Flakes and Rice Krispies. Then, when he realized the scope of the job, and how long it would take,  he tried to come up with some shortcuts to make it go faster.  Bless his lazy little heart. THEN, when those didn’t work (toy cars and books make horrible brooms, go figure),  he complained that his arms were tired and refused to do any more.  This all happened in a span of  five minutes, by the way.  He was whining about his arms like he just completed a CrossFit workout.   J, to her credit, tried to eat up the mess, but eventually she gave up/got full/lost interest.

If you’re looking for quick, easy breakfast/snack ideas for the kids, you could do a lot worse than giving them Kellogg’s Cereal Variety Pack. My kids liked the Froot Loops the most. There was a trail of loops from the pantry to the stairs, and hardly any in the playroom. This indicates that they were most hyped up to chow down on those first.

The one con with these fun packs is that they are a  pain to try and vacuum up when your kids pour them out on the floor. You probably won’t have that problem, though. You probably don’t have most of my parenting problems.

Nonetheless, on a scale of  confused Garry Moores talking to Tony The Tigers, I’ll give these cereal variety pack products a  4 Garrys and Tonys out of 4.