I’m no psychologist, but I’m pretty sure that everybody is afraid of something. Sometimes, there’s a legit basis for those fears; other times, there isn’t.  I’ve noticed that the latter is especially true with small children.

Now, a lot of what B and J do doesn’t make a lot sense to me, anyway.  So, of course, some of the stuff that they are scared of fits right into this. For example, as  I’ve mentioned before, they think that Michael Jackson’s Thriller video is hilarious. Dancing zombies and Jacko turning into a werewolf is funny, apparently. Yet, when I switched on the video for Rude by Magic! a few weeks ago, B made me turn it off. He said the lead singer was creepy. He was straight terrified when I told him that, yeah, that was his real face, and yeah, he did live in our world.

While that was a pretty specific incident, a few of my kids’ other phobias are more universal.

I know that people a lot more edumucated than me can succinctly rationalize this one, but I  really don’t get it. When B and J were babies, they would get shots.  Beyond a little bit of crying, it wasn’t a huge deal. It’s not like there was anything too traumatic about any of their experiences. As they’ve gotten older, though, their fear of NEEDLES!! has grown. They just hate dealing with tiny pricks (That’s what she said! Haha. Hoho.)

Back to what I was talking about. Lemme tell you a story…….

A couple of  days ago, B had a doctor’s appointment. Routine check-up, followed by a couple of vaccinations.  We booked it weeks in advance.  Leading up to this appointment, I had heard B running off his mouth to J, acting like big shot. He would say that he was getting NEEDLES!!, but he wasn’t going to cry. Stuff like that. It was almost as if he was excited, to get his shots.

A few nights before the big day, I read one of his favorite books to him, Curious George Goes To The Hospital. There’s a part in it where George has to get a NEEDLE!! and flips out about it initially, but then it turns out to not hurt at all. If a stupid monkey can get poked no problem, then B would be able to as well, for sure.

The day of the appointment, I had to pick him up early from school, to take him there. On his way out, I heard him proudly tell his teacher, and anyone within earshot, that he was going to get NEEDLES!! On the car ride down, I  asked if he was nervous. He said no. Cool, calm, collected. Perfect!

When we got to the doctor’s office, we were led to a room, near the back.  Eventually, a nurse came in, and asked us a bunch of questions. At one point, B impatiently said “Can you please just give me my NEEDLES!! now?” Of course it wasn’t time for that yet, though. After the nurse left, the doctor came into the room. Her and B exchanged pleasantries like this:

(By the way, my kids aren’t very good at exchanging pleasantries).

After answering some more questions, the doctor left the room, to get the nurse who would be doing the honours. I should note that the whole time while we were there, B was either playing with toys, or fiddling around with stuff in the room. Not a worry in the world. Finally the nurse arrived, with her kit. B asked if he would get a sucker after she was done, and she reassured him that he would. So, she opened up her kit……

It’s as if it went from him thinking that he was getting something like this: 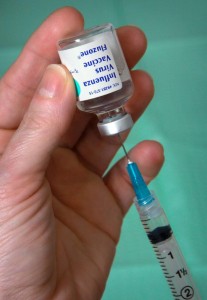 To him thinking he was getting something like this: 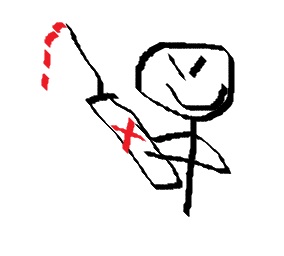 As such, to say that B freaked out would be an understatement. Mr. Cool As a Cucumber was now Mr. Explosive Jalapeno. It started off with him repeatedly saying no the NEEDLE!! This morphed into him loudly refusing and squirming.  Attempts to reason with him fell on deaf ears. Soon, he started screaming his objections .

The nurse suggested that I try to restrain him. Upon hearing this, B took off and tried to run out the door. I managed to snatch him before he made it out. While I dragged him back, he was yelling stuff like ‘Help!’ and ‘You’re killing me!’ (Note to anyone in the doctor’s office that day – he was fine. We weren’t killing him).

Physically restraining someone who doesn’t want to be restrained ain’t no joke, either. He’s five years old, and doesn’t lift, bro, but all of the sudden, he had the strength of someone four times his age. I managed to pin his arms down, by giving him a gentle bearhug.  While he frothed at the mouth, the nurse administered the shot in his one arm. He had no clue, though. When we told him that one was finished, all that he was worried about was the next NEEDLE!!

By this point, I was concerned that he was going to go full Exorcist on us. You know, make his head spin around, or start to spider walk.  Luckily, he only tried (and failed) to Hulk up out of my grip.  The nurse quickly gave him the second shot, in his other arm.  After it was over,  we told him to chill.  No joke, this is how the convo went:

B (suddenly perfectly calm, in his regular voice) – “Can I have my sucker now? Can I have two, for getting two needles?”

And then he hopped down and helped himself to two lollipops. Mr Cool As a Cucumber again, not a care in the world, as if the last five minutes didn’t happen.  Forget going 0 to 100; how the heck do you go from 100 to 0 real quick like that? I swear, I started looking around the room for hidden cameras, and waited for the nurse to tell me that I was going to be on Just For Laughs. No dice, however. I did find it funny that the nurse didn’t change her demeanour once, through the whole ordeal.

The moral of this story? Being afraid kind of sucks. Making you children got face to face with their fears kind of sucks, too.  However, if they happen to overcome their fears (even temporarily) during this confrontation, and not hate your guts afterwards, then the struggles were probably worth it.