Movie Review – From The Rough 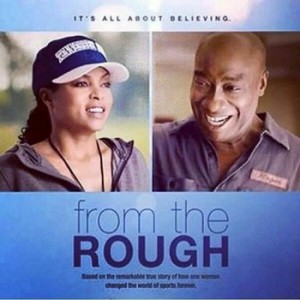 Recently, I was contacted about reviewing the movie ‘From The Rough.’ Not going to lie, I wasn’t familiar with it at all. However, after a quick Google search, I figured, why not? While definitely family friendly, my kids are a bit on the young side to really enjoy it.  So after they went to sleep early one night, with no Bedtime WTFness (I know. I was scared, too), I was able to check it out.

‘From The Rough’ is based on the true story of Catana Starks.  She went from coaching Tennessee State University’s  successful women’s swim team, to becoming the men’s golf coach.  As the first African American woman to ever coach a men’s college golf team, the movie shares many of the personal and professional obstacles that she overcame. Out of necessity, she recruits a bunch of underprivileged yet highly skilled kids from around the world. Despite them having to overcome obstacles of their own,  and having to use some really ghetto clubs, she ultimately lead her squad to a record-setting showing at the PGA National Collegiate Minority Championship.

Starks is played by Taraji P. Henson, who is usually on point in her roles (word to ‘Hustle and Flow’!).This one was no exception, as she kills it as the tough but caring coach.  Why this woman isn’t a bigger star in Hollywood, is beyond me.  Actually, the acting overall was solid, as almost everyone did a believable job with their characters. They were really engaging, which really helped me get into the movie, and stay with it. My ‘Man, this part is boring. Hey, that guy looks familiar. I’m going to Wikipedia him right now!’ count was minimal.

I can honestly say that I really liked this movie.  Yo, I’m a sucker for those films about underdog sports teams that beat the odds. This was easily one of the better ones of that genre which I’ve seen (I mean, it’s no ‘Happy Gilmore’,  but then again, what is?). Is it perfect? Nah, of course not. Regardless, if you want a family friendly movie about perseverance and standing up for yourself (no flex zone!),  you could do a lot worse than ‘From the Rough‘. It’s just these types of inspirational, entertaining hidden gems which warrant more attention, which is why I don’t mind recommending that you check out this flick.  It’s a movie worth watching about a woman who’s story deserves be told. Ain’t nothin’ wrong with that!

1 thought on “Movie Review – From The Rough”