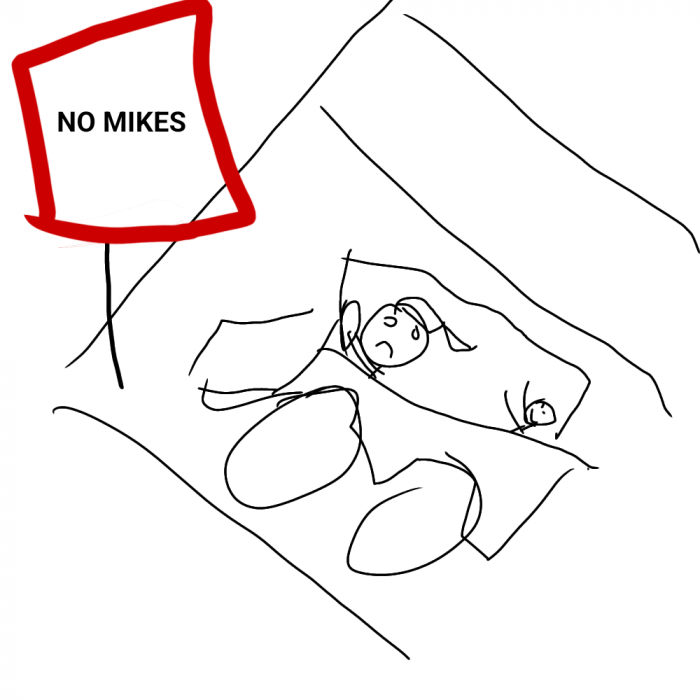 Alright, so given everything that’s been going on in the world lately, I figured I’d hit you up with a feel good story…..kind of!  A little positivity for y’all……probably!  The underdog steps up to the big dog, and comes out on top…..I think! Without further adieu, here is the tale of Mike versus Walmart!

It all started on one chilly, snow-kissed December day in 2018. Ya boy was out shopping with, uh, his  youngest boy KJ, who was about two years old at the time. A trip to the local Walmart was needed, and, due to the less than ideal weather, I parked my car in the “parking for customer with child” spot.  These parking spots tend to have different phrasing wherever you go, but it’s the same basic idea. Slightly larger spots reserved close to the stores for people who are expecting, or who are with small kids.

Flash forward to a few days later, when our protaganists once again found themselves out shopping, but this time to a different Walmart in Hamilton.  With the weather in full Canadian winter mode, I once again looked for the special spots, and pulled into one. I then glanced up at the sign and noticed that it said:

Huh. Mother’s Parking. As in, no one but moms could park there. 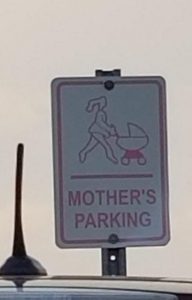 Truth be told,  I rarely  used these reserved spots when K wasn’t with me.  It wasn’t that big of a deal to walk a little bit farther usually, with my kid/kids. The only times that I ever really parked in them were for weather-related reasons. So, as such, once I saw this sign, I did what any good dad would do:

BACKED MY CAR OUT, AND PARKED A FEW ROWS  AWAY

What? It was 2018, man! Times were different. Like, even though I only used these spots sporadically, I would still get disapproving looks frequently, for using them. I’ll let you draw your own conclusions as to why this was. However on that day in that Walmart parking, I was confused, and I wanted answers. So, as such, I did what any good dad would do:  I tweeted Walmart!

Hello Mike. Please provide us with the store location.

For real, I  figured that this might be my 15 minutes of fame moment.  Stories about stereotype-defying, boundary pushing fathers are always aweome. Shoot, even in Canada, one dude convincing a grocery store chain to change their parking lot signage was newsworthy. And now, here I am, calling out the mighty Walmart on the same thing?!  I’d be sharing my tale on Good Morning America and Breakfast Television in no time! Move over, Erin Brockovich, make room for Mike the dadvocate.

Shot fired, I waited for my tweet to blow up. Alas, going viral eluded me. No news outlet picked up what I was dropping, too. Even worse, Walmart responded to my tweet…..and then nothing. I guess that I should have got my Elsa on and let it go at that point, but I couldn’t. Good parking spots aren’t a right, obviously, they’re a privilege.  In terms of gender/roles, though, even I knew that boldly proclaiming “Mother’s Parking” in 2018 seemed tone deaf, outdated and exclusionary. I wanted Walmart to make the change.

A new plan of action was needed. I considering making a bunch of  burner accounts, and blowing up Walmart’s social media feeds with questions about their parking signs, so that they would think the complaints were widespread. My buddy and I had employed a similar technique at Big Bucks Mountain Lodge in Burlington, Ontario years before.

On a hot, sweaty drunken summer night, we thought that it would be hilarious if we could convince the DJ at that club to play Michael Jackson’s Thriller, the most un-summer song our drunk minds could think of.  First,  I went up and asked. The DJ, focused on his music, didn’t look up at me and grumbled he’d try. My buddy went up a bit later to ask, receiving a similar uninterested response.  Later on, we then switched shirts, and I went up and asked again, but this time with a fake accent. Same response from the DJ. My buddy then went up a while after to ask, while wearing my shirt.  Minutes later, with us now back in our own attires, the DJ excitedly yelled into his mic “You’ve been asking for it all night, now here it is!”.  The opening strands of Thriller soon filled the club.  I can just imagine that  poor DJ’s reaction, when two idiots ran excitedly to a dance floor to horribly perform the choreography from the Thriller video, while everyone else in the club left the dance floor in confusion/disgust.

Instead of the Big Bucks Thriller method, I went with the Keep It Simple, Stupid method. I called the store, and I called Walmart’s head office. Each time, I politely explained my thoughts, and each time I could politely hear the other person’s eyes rolling over the phone. My follow up calls weeks after got the same response. Same with a follow up tweet. Thanks, we’ll look into it, basically.  I got the point, loud and clear.

Weeks turned into months, and months turned into years.  Using KJ as an excuse to park in those special spots soon became unrealistic, to me anyway, as he was outside of the unwritten required smallness. There were way more important things to worry about, too. The few times that I went to that Walmart, though, I did hold out hope that maybe the signs were changed….only to be repeatedly bummed out. Again, it really didn’t affect me anymore. I was parking wherever. It was just the principle of it.

Flash forward to last week. On a frosty March night, I found myself in that particular part of Hamilton, needing to make a quick stop at that Walmart.  A spot was available beside one of the reserved ones, so I rolled in. I got out of my car, looked down, and noticed this: 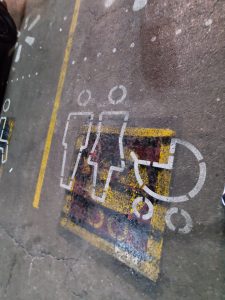 I then looked up and noticed this: 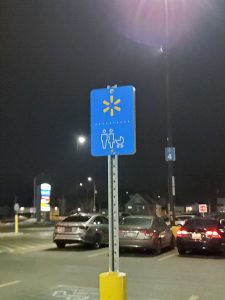 Yo, I have no idea when or why that Walmart changed the signs. Most likely, I had nothing to do with the decision.  However,  I am clearly taking credit for it.  Almost four years in the making, but the underdog won! Woof, woof!  Better late than never, right?

OK, OK, I know, I know, I need to chill.  In all seriousness, consider this post a reminder of how change doesn’t always happen overnight, but with a little work and patience, it will happen eventually. It’s especially important for the children to see this, and be reminded of it.   And of course, the most important thing that I hope you, dear reader, take away today is this:

DO NOT REQUEST THRILLER IN DA CLUB IN THE SUMMER.