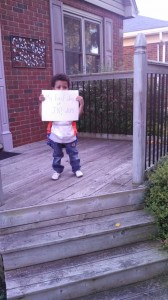 Yep, September’s here, so that means one thing –  back to school time for kids.

That picture above is from last year, on B’s first day of kindergarten. Now, I’m a cool dude, but I can’t front. That day was pretty emotional. My lil man was now a little man, gettin’ his edumucation on!

From then on, I honestly thought that things would be like how they were on those TGIF television shows from the 1990s.  You know, we’d come home,  sit around the dinner table, and talk about our day. B would regale us with tales of his scholastic adventures.  Maybe there would be canned laughter from a studio audience.

Turns out TV mislead me again. Tanner family, we are not.

See, it was a two fold problem. Both of which were mad frustrating.

First off, B wouldn’t tell us anything. Almost every question about school got met with him not wanting to talk.  The best example of this was when I asked him what he did that day, so he did the Run-DMC pose (feet wide, arms crossed, chin out) and told me “No more voices!”

Occasionally, I did have relatively productive talks with him. I had to be a French guy named Jesse, though. Jesse (me) would ask him questions in French.  I, as myself, would translate them into English for B, and he would answer, which I, as me, would then translate into French for Jesse (me) to understand.

Confusing, right? And I don’t even speak French. But at least he was telling me stuff.

That leads to the other problem.  Some of the stuff that he would tell us, just flat out wasn’t true.  Children have the craziest imaginations, I get that. Kindergarten-aged ones are still learning how to interact with people, sure.  Regardless, the stuff that came out of his mouth would vary from slight exaggerations, to full out lies. I had no idea that in addition to the 3 R’s, he was also learning how to do the big F (Fib. Get your mind out of the gutter).
One time during the first month, I asked him what he did that day. He said the class went on a bear hunt. One of the bears scared him.

Another time, he told me girls liked to touch his hair. When they did, he would pat them on the back.

He told us that no one liked him and all he wanted was a friend. Now, of course, you don’t want your kids thinking school is a popularity contest.  This was still a little troubling to hear, however. I figured that I’d ask his teachers about it on ‘Parent Teacher Night’, which was like a week later. So,  when that night came around, B and I headed over to his school. We got to his classroom….and he immediately ran off and started playing with some other kids. While he was playing, some other boy called him over, to play. I heard that boy’s mom say that B was someone who she ‘heard a lot about.”

When I did tell his teacher what he said to us, she stared at me with the most confused look, as if she had no idea what I was saying (you know, like that look you get when you try to explain the plot of the movie Inception to someone who’s never seen it. ‘Wait, so they go into people’s dreams? And plant ideas? Do they use soil and dirt, to plant them?  Do they shrink and go through the sleeping person’s ear?’).

B’s teacher told me that B got along with everyone!

After that, we left his room and did a tour of his school. As we were walking around, kids and adults kept saying hi to him, like he was Zack Morris or something. On our way out of the school, we bumped into another one of his friends. This kid’s parents also said that they had heard so much about B. B and his buddy were ‘partners in crime’, they said.  WTF. When we got home, I asked him what the dilly-yo was, and why did he say that no one liked him, when that wasn’t true at all. He stared at me with the most confused look, as if he had no idea what I was saying (you know, like that look you get when you try to explain to someone who doesn’t know who Kim Kardashian is, why she’s famous. ‘Wait, so she doesn’t sing or act or dance? What’s her talent then? What do you mean she doesn’t have one?’).

As the year went on, his communication got better. The fibbing did, as well. He said the most ridiculous things with a straight face. And not just when it came to school!

A  few months ago, our neighbour came over and asked how many children we had.  It was a weird question, because, while we were still fairly new to the ‘hood,  we had chatted with her frequently, and B and J had played with her kids several times.  I told her that we had two and asked why. Apparently, B, in all seriousness, told her that he had another brother who we kept locked up and never let out. Our neighbour was shocked, but when she asked what his name was, B hesitated, so she thought that he might not be telling the truth. #lolkidssaythedarndestthings.

WE DO NOT HAVE A SECRET CHILD THAT WE KEEP LOCKED AWAY.  OUR OLDEST CHILD MADE UP THAT STORY.

We’re still working on the ‘honesty is the best policy’ thing. It’s a work a progress, no doubt.

Anyway, for real, imagine trying to do a puzzle with 1000 pieces. You got your pile set aside, and you’re trying to work it out. Now, imagine someone dumping another 1000 piece puzzle into the pile that you were working on. I don’t know what your conversations are like with your kids but, sometimes, that’s what it’s like trying to talk to mine. You’re just trying to put the pieces together to get the full picture, while removing the pieces that clearly don’t belong.

Good luck with your puzzles.