It’s The Thought That Counts 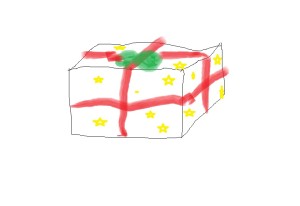 As I’ve mentioned before, I’m not an expert on parenting by any means. And as you’ve probably noticed, this isn’t one of those blogs where the writer gives you all kinds of tips, suggestions and examples of how to be a great parent with perfect kids.

With that being said, I do consider myself to be very fortunate. Started from the bottom…..and now we are slightly above the bottom.  Hey, I’m not Drake, but life could be a lot worse, for real. Within our modest means, B and J are taken care of. Things like extracurricular activities, going to birthday parties and buying a gift, or even being able to take part in pizza days at school, everything has a price. We don’t take for granted that we are able to afford these things. First world problems, yo. Shoot, I was pretty ghetto as a child; you don’t have to tell me what it’s like to be without! So yeah, K and I do try to instill a sense of gratefulness in the kiddos. All you can do is hope that what you’re putting down sticks, and that they don’t become a couple of spoiled, entitled brats.

Since it is the holiday season, we asked B to pick five toys that he didn’t play with anymore, which he could donate to a local charity (along with some stuff that we were giving away). You know, for some kids who didn’t have many things. Not in a patronizing way or anything like that. It’s just that you’re never too young to learn about lending a helpful hand, right?  So we told him to think about it. But you know how children are. Think?! Ain’t nobody got time for that!  Better to do it with no thought, while it’s fresh on the brain. He immediately went to work in the playroom, and randomly picked these, no joke:

Uhh….a marker lid?!  Don’t want to give up the marker that went with it, eh? It’s kind of a package deal, you can’t have one without the other.  But OK. At least you won’t have to worry about the kid’s parents scrubbing blue doodles off the wall, because you kept the marker.  Hmm…that actually was kind of considerate, when I look at it that way. However, it’s not really a toy, B. I mean, it might work as a pint glass if the kid is playing Pub Crawl with their action figures. Or maybe as a telescope if their Ken doll wants to stargaze or spy on Barbie or something. But that’s about it. What else do you got? 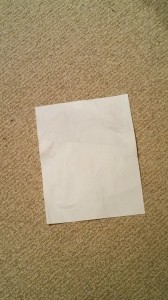 A…a piece of paper?! What? Are you sure that you don’t want think about these? And not just grab the first thing that you see? Well, I guess this makes sense. Whoever gets the paper can pretend to write on it with the marker that you didn’t give them.  This isn’t even a fresh sheet. You drew on the back of it, eh.  OK, fair enough, it’s artwork, and it might have some value one day if you’re the next Picasso, baby. However, for the time being, you’re supposed to be hooking up toys, remember? I’m sure that there is probably someone who wants a used piece of paper. The people who we have in mind probably aren’t paper airplane connoisseurs, though, so let’s try something else, alright? 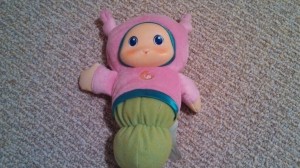 Aww, now this is more like it! An actual…..hey wait a minute. This belongs to your sister! And she still plays with it! You can’t volunteer her toys! Try again! 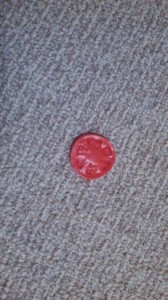 A plastic tomato slice?  Really? Why did they make a toy of this, anyway? I think it came with a BBQ playset, but who wants to pretend to eat a tomato? We should have used this as punishment:

“That’s it! Timeout, B! Get the tomato slice, and play ‘Subway Sandwich Artist tries to make BLTs without the B or L’ now!  I know that game sucks huge, but it’s the only way that you’ll learn your lesson!”

Dude, did you ever having fun with this thing?  Hey, remember when we told you that we were going to put the Christmas tree up, but we got home late and we couldn’t do it, and you were super disappointed? If you give away this tomato, whoever gets it will have that same disappointed feeling. Now you don’t want to do that to someone, right? Didn’t think so. Keep on picking. Again, you might want to put more thought into what – 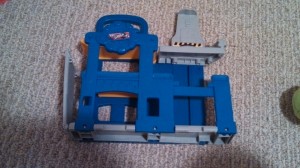 Oh, you’re still not thinking hard about these, eh, bud? Still just grabbing at will? Well, at least you’re on the right track now. You’ve played with this garage toy a lot. It’s pretty beat up and broken, though, plus a bunch of parts are missing. The cars are supposed to gradually roll down the ramps, and now they just plunge and crash. It’s a little sadistic, but I guess it will do. Hey I got an idea, since it is a car garage, and you have a lot cars, what if – 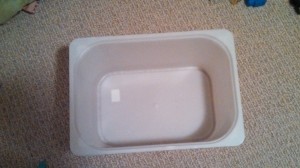 Whoa, didn’t see that coming. Aaand we’re back at square one. We’re picking toys, man. This is a bin that you put toys in. If you give this, lil homey/homegirl that receives it is gonna be like ‘where the toys at?’ This is worse than giving someone coal. It’s like you’re on the naughty list, so here’s your empty bin which would have been full of cool stuff if you hadn’t been such a nitwit all year. For maximum effect, you should put a single plastic tomato slice in it. OK, OK, I’ll stop hating. This does have some minor potential as an object of play.  James Naismith would have put this on a pole and invented basketball with it. If the kid that gets this bin is into using household objects to invent sports, they’ll be tickled pink. For the nautical fan, I guess this might work as a boat. You should really think about giving up some cars, though. I’m sure someone would love – 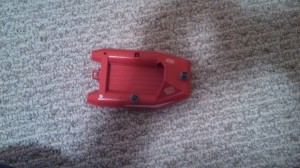 Oh, you found a real boat instead.  Wait, what happened to this thing? It was pretty dope before. It had flagpoles, and lights, and oars. Now it’s just a raft. Where’d all the cool parts go? Scratch that. I don’t know where they are, but I know where they’ll end up – embedded/impaled in my foot when I step on them somehow. Why does stuff always go missing, anyway? Before you and J, I could keep track of everything.  These days, I’m lucky if we all leave the house with matching socks.  But back to this boat.  It used to be cool, but then it got stripped down, so now it’s not so great. It’s like reverse Pimp My Ride. Xzibit would not be impressed. Whatever.  It gets a thumb’s up.  I think we’re done for the day.

Good job buddy, and don’t mind me. Always remember – it really is the thought that counts!

1 thought on “It’s The Thought That Counts”