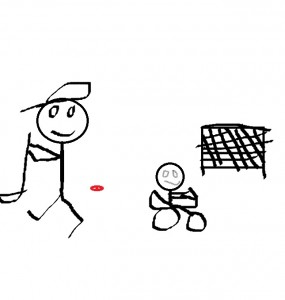 One of the cool things about small children is that they are easily entertained. “I’m bored!” is not  really in their vocabulary yet, so they can always find some way to amuse themselves.  Currently, my kids like to play ‘camping’, for example.  They can play that for like an hour at a time.  I have no clue what they’re doing.  They pile up a bunch of stuff (stuffed animals, toy shopping carts,  high heel shoes etc.) and then pretend to sleep under some blankets.

Whatever, though. The key point is that an hour of  them happily playing means an hour free for me!  I do the most productive things during this spare time, yo. You know, like chew through an episode or two of a show all of my child-less friends binge watched years ago, that I missed out on  (Did you know that Dan was the Gossip Girl, all along? OMG!).

Sometimes, a kid’s imagination is an uncreative parent’s best friend, for real. Other times, however, you gotta keep their imaginations in check. Those things can go 0 to 100 real quick, if you don’t.

B and I used to have this thing, where we would ‘zap’ each other. He’s pretty ticklish, so as a joking consequence to something, I would shape my fingers like a gun, poke him and make a buzzing sound, causing him to giggle. He started doing it to me, too, when I got out of line. My reaction was to act like I was being electrocuted.  It was stupid, I know, but it was easy to do, and it amused him, for some reason.

Last summer, I saw him zap a little girl. Just out of the blue.  She looked at him exactly like you’d expect she would, when a weird kid is poking her in the arm with his finger, while saying “bzzzzz.”. I then imagined what would happen if B ever got into a fight.  I’m pretty sure that a punch to the face trumps a zapper 100% of the time.

We don’t zap each other very much nowadays.

I’ll give you another example. It was an afternoon a few months ago. B was messing around, and he somehow found a sponge ball. So, randomly, do you know what he wanted to do with it?

No, not that. Play hockey with it, that’s what he wanted to do!

Now, I’m not that into hockey (Sigh. Yes, I’m Canadian. Not everyone here is a hardcore fan), but we do own some mini sticks and nets. So, off to the basement me, B and J went.  National Hockey League, here he comes? Well……let me give you the Sportscentre recap of that afternoon’s events:

1) No goalie allowed (his rule), so I took a shot and scored. He dropped his stick, and hopped on J’s pink tricycle:
Me – ‘What are you doing?’
B – ‘It’s my break bike.’
Me -‘A break? From what? You didn’t do anything.’
B – ‘It’s my work bike. I’m doing my work.’
The work just involved doing laps of the basement, like a Zamboni driver. I grabbed a seat and waited.

2) Work’s done, so he picks up his stick again. We stand up, he whiffs on a shot, and then he’s back on the bike:
B – ‘OK, the Zamboni has to clean the ice now!’
He does more laps and talks to me about cleaning the ice, in a deep, manly voice.

3) The ice is  apparently clean, and it’s time for more hockey! As soon as he parked the bike, J walked over to it, and started riding it. And as soon as she did, B whacked the ball as hard as he could and sent it flying into a pile of boxes:
B – ‘The ball is gone forever! I need a break.’
Me – ‘A break from what? You still haven’t done anything!’
B – ‘I need to clean the ice again!’
He chased J down, got the bike back, and did more laps. More manly Zamboni driving voice, too.
4) I found the ball, and started taking light wrist shots at him with it, while he was riding around. What? It was made of sponge, it didn’t hurt. I used to do the same type of thing at the driving range, to the person in the golf ball collector. Anyway, he got off the bike, and it’s game on, finally. He steals the ball from me, scores, and then tells me it’s my turn. I take a shot and the ball ends up flying into a box. Swish! So then:
B – ‘OK, it’s break time.’
Me – ‘A break from what?! You still haven’t done anything!’
B – ‘Can we play basketball?’
Me – ‘We don’t have your basketball. It’s in Mommy’s car.’
B – ‘Well I need to ride my bike then.’
More laps.

Doesn’t really matter. Whatever it was we played, it was still pretty fun.

Who could have imagined that?