PART 3: That Time When I Tried To Go To Disney World For Free By Being On a TV Game Show

And now, the exciting conclusion to the best trilogy since Lord Of The Rings! Well,  not the best, but it’s probably not the worst. Maybe. I don’t know.  If you have ever wondered how to get on a game show, read on!

Anyway, at the end of part one and part two, B and I were heading out the door from our backup contestants gig on Just Like Mom And Dad. The casting director then gave us a silver lining, for my master plan of getting a free trip to Disney World.  She mentioned that one of the contestants for the final taping had been in an accident. Thus, they were touch and go on availability. She then asked if B and I were available to be backup contestants again.  We agreed.

Two days later, she called me. The other contestant was out.

B and I were in for sure!

For the love of Epcot, Could my plan actually work?!

Leading up to the taping, B and I were very confident. Remember, we had the added advantage of seeing two episodes, so we knew what was to be expected.  B’s biggest worry was the plane ride that went with winning the trip (from his newfound flying fear). I was only concerned with coming as across as interesting, but not “go-viral” interesting. You know what I mean. No one wants to be that person on the game show who says or does something so ridiculous that the world thinks you’re an idiot.

Finally, the big day was here. On arrival, we were led to a dressing room, with the other two teams.  The casting directors hung out with us the whole time. I’ll admit to being nervous, but they really lightened the mood. We all practised our intros and anecdotes, which put me at ease. The banter with the show’s hosts, Kylee and Sandy,  was where I felt that I would fail the most, but since I had some talking points ready, I was solid. We met wardrobe and makeup people, and got mic’d up as well.  Our competition for the day, a mother/daughter and dad/son duo, with the kids being close to B’s age, were all nice and personable.

Word to Drake, nice for what, though? While they would make for good TV, my eye was on the prize. Disney World would soon be mine for the taking. I figured out how to get on a game show. Now it was our chance to win on a game show.

We were led out of the room, and down a hall. I felt like a UFC fighter, making that walk out from the back, to the cage. Just full of nervous excitement, especially as I got to the stage, under the bright lights, and stared out into all of the cameras and people in the crowd.
After we did our introductions, the game was on.  It was time for the kid’s round. The parents were escorted to a soundproof room, and given radios with headphones, to avoid hearing what was going on in the studio.

Eventually, we were brought back.  First up for me, was a question about what B would do if he wasn’t playing basketball. Going along with our sports shtick, I said baseball. B, however, answered video games. Not an ideal start.

Next was a question about what subject in school B was least excited about.

Now, I knew that B loved math and was good at it. However, less than two days prior, B told us that he hated math. So using the “what have you done for me lately?” logic, I said math. Boom!

Wait, no boom. I was wrong. B said social studies. He loves math. Oops!

The kids were then led to the soundproof room, as it was parent question time.

As the hosts bantered with the other contestants, I ran through what I was going to say, in my head, like we rehearsed. Easy, peasy. So of course, when Sandy came over, he asked me an out of the blue question about my soap box derby career as a child. WTF?! 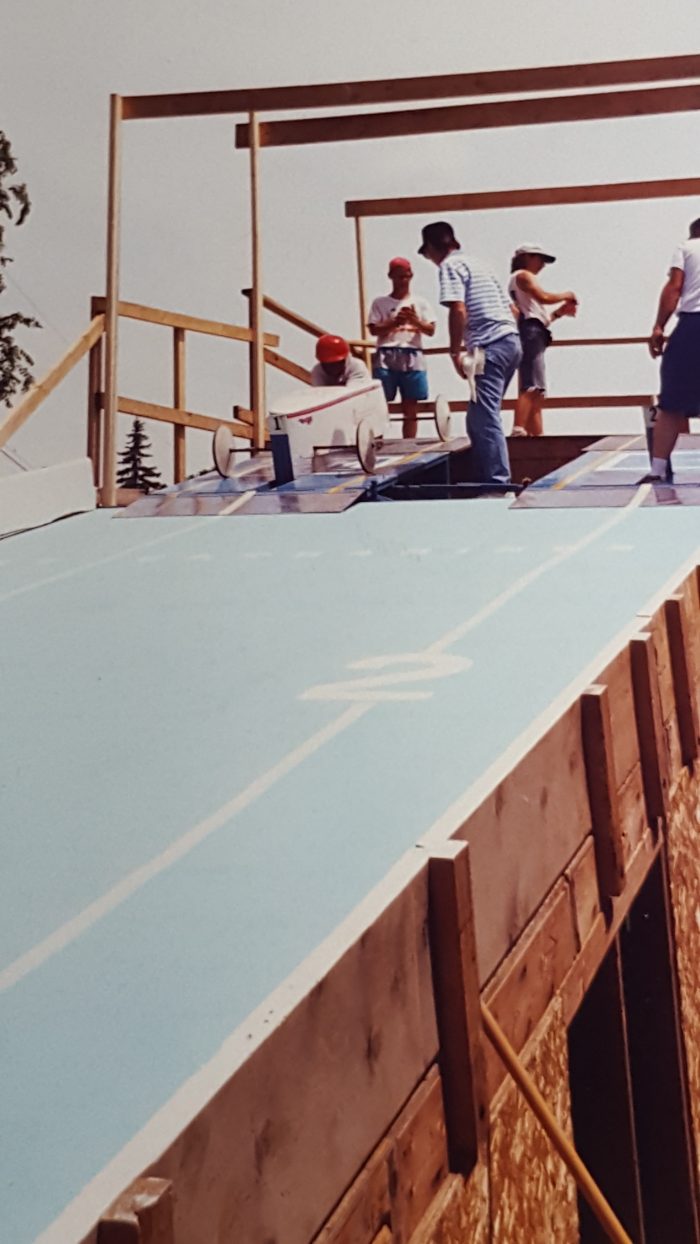 I guess, in the audition process, I had mentioned this. Completely caught off guard, I rambled and babbled to Sandy until he mercifully pulled the plug and asked what  kind of fish B would be.

B isn’t exactly aquatically inclined, so I said a shark. Is a shark a fish even? Like Laurel vs. Yanny, it’s all about interpretation. The judges said it was, so my answer was locked in.

For the next round of questions, I tried to remember what the heck else I said in the interview process, but I was drawing blanks. Kylee then came over, and proceeded to say “We understand that you love Kanye West.”

I know, I know, y’all. Trust me, I know.  You gotta remember, this show was taped in October. Kanye’s a polarizing figure, but I do like his music, which I had  mentioned during the audition. Recently, however, Yeezy said some highly controversial, incendiary stuff. Stuff that infuriated a lot of people, especially in the black community.   So, yes, as things are at peak “everyone hates Kanye” levels, there was at least one brother on TV happily saying that he loves Kanye – me. While not quite game show fail montage-worthy, it was still pretty cringeworthy. From now on, if people ask who my favorite musical artist is, I’m just going to keep it safe and say Pentatonix.

Anyway, Kylee asked a mulitple choice question about Mr. West, with one of the answers being underwear. B’s finds undies funny, so I went with that.

When the kids came back, B got the first question wrong. He even questioned whether a shark was actually a fish. He also, unrelated, is on Team Yanny.   Regardless, for those keeping track, that’s still zero points for your boys. The only saving grace was that the other teams weren’t doing so hot, either. On the last question, we avoided the embarassing shutout, as B nailed the underwear question. Going into the bake-off, we were in first place! 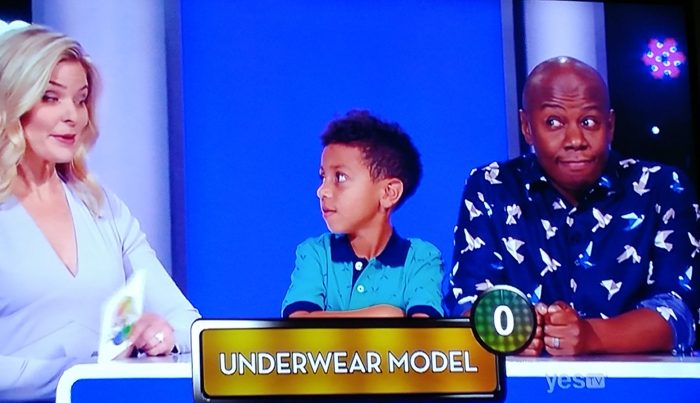 The kids had made their 60 second recipes earlier, while we were away in the soundproof area. Oatmeal cookies ala child-trying-to-make-their-parents-barf was on the menu. We had 30 seconds to try each cookie, and then at the end, we had to hold up a number indicating which cookie was our kids. Not gonna lie, them biscuits were nasty. Very uncookie-like, with weird textures and flavour combinations. As part of my non-viral thing, I wanted to play it cool. This turned out to be impossible.  Those cookies were gross, son. I was gagging and having trouble swallowing. Longest 30 seconds ever! 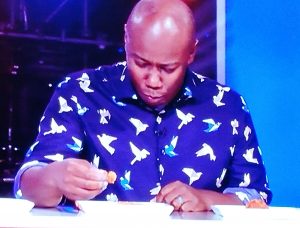 B had said on multiple occasions, and even during the audition, that he wanted to make something really spicy. One of the cookies had some kick to it, so I guessed that one. At least the food at Disney World was tasty, from what I’ve heard, so this disaster would soon be worth it.

On the big reveal, the first contestants guessed right, putting them in first place. The second pair was wrong.  It all came down to me! Disney dreams hanging on the outcome, I held up 2.

While I was happy for the winning team, since they were really nice people, I was super bummed.  Then insult got added to injury. The winning duo spun the wheel…..and landed on the Sunwing trip, just as I had knew it would since the day that I came up with my plan. As the crowd went nuts, confetti rained down on the celebrating victors. A great moment for them, no doubt. For me, not so much.  I felt like a UFC fighter who went five rounds, toe to toe, winning the fight on the score cards, but then got knocked with five seconds left in the last round. So close, and yet so far. The dream was officially deader than Mufasa in the Lion King.

Nah, for real this time, it was over.

And that’s the story of  when I tried to go Disney World for free by going on a game show.

My seemingly ridiculous scheme didn’t work out, but I was one number away from pulling it off. Feel free to keep that in mind the next time someone tells you that one of your ideas sucks! Also,  B and I had an unforgettable, memorable adventure together. I’m proud of the lil dude, and that’s worth more than any vacation (at least, that’s what I keep telling myself).

I really can’t say enough good things about all of the  JLMAD crew, too. Making a TV show is a tough job, especially when dealing with unpredictable little kids, but everyone was always positive and cordial. Finally, B didn’t walk away empty-handed. He got a cool hockey prize pack, along with some other swag: 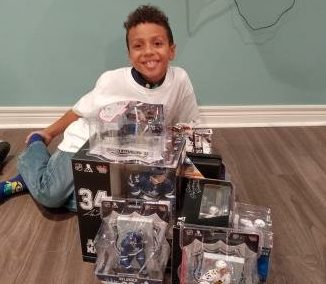 For those wondering, Just Like Mom And Dad is currently casting for season two! Now that you know how to get on a game show, you can apply here.

Now, if you can excuse me, I’m off to go listen to some Pentatonix. Maybe they got some Disney-themed songs.  Later, y’all.

3 thoughts on “PART 3: That Time When I Tried To Go To Disney World For Free By Being On a TV Game Show”