How To Attend A Championship Parade 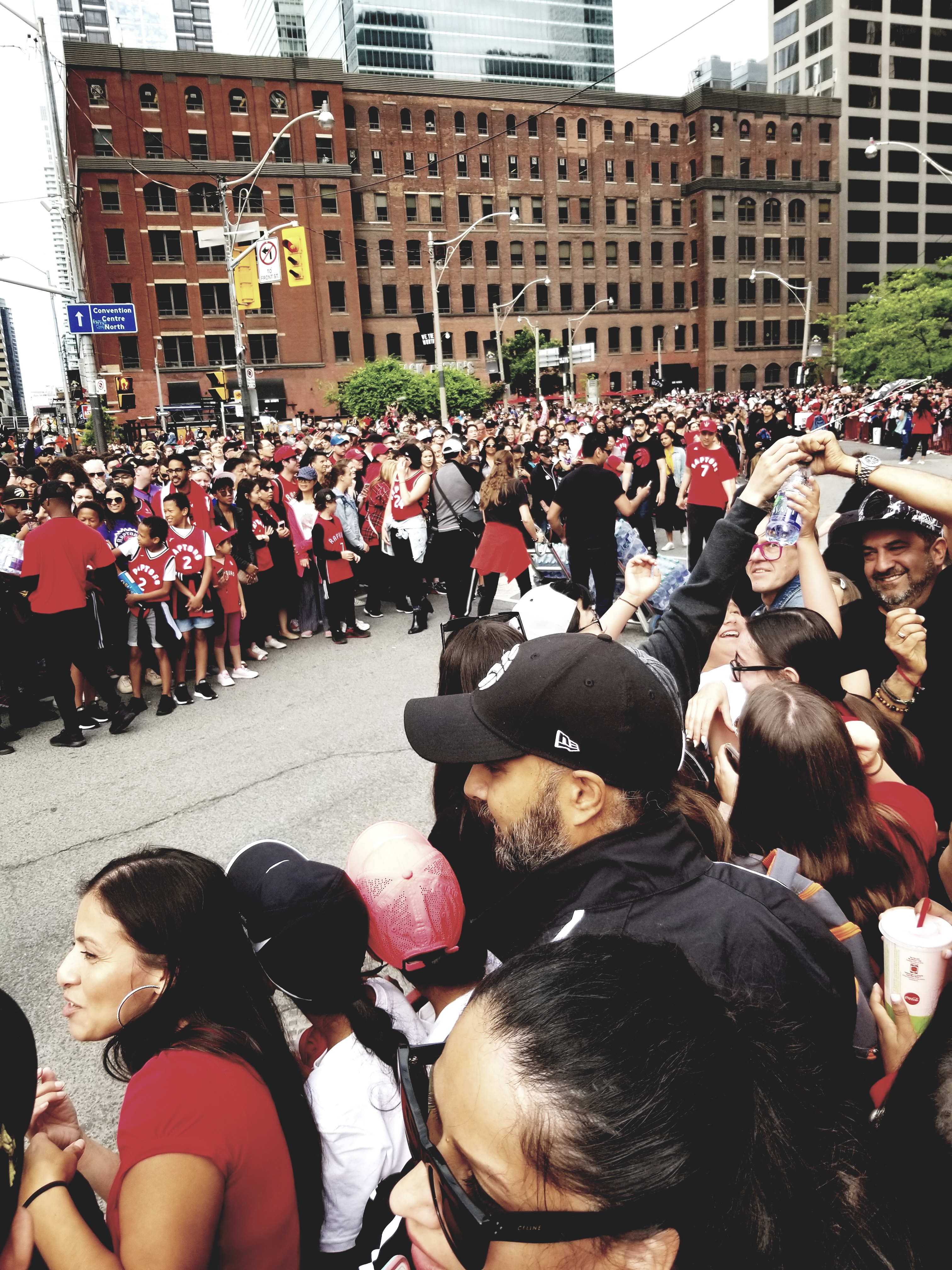 Congratulations! Your favorite professional sports team won the championship, and now it’s party time! Or more specifically, it’s championship parade time! But, what’s that, you say? You’ve never been to one before, and don’t know what it’s like? Well, have no fear, dear reader, as I’m about to hook you up, and give you some advice on how to attend a championship parade. Let’s get it on, FAQ style!

Have you even been to a championship parade before?

Yup. I was one of the two plus million who took part in the Toronto Raptors’ celebration this year. As someone who’s a lifelong fan of the Raptors, the Phoenix Suns, and the Toronto Blue Jays, all of whom aren’t exactly perennial champions, it was a pretty amazing day!

Your choice in teams is very questionable, so I don’t think that I trust your judgement, or your advice. Do you mind if I stop reading now?

Fine.  What should I bring with me?

I’ll start with what you should not bring.  And that…..is little kids.

I’m just sayin’. For one, teams tend to schedule these things during the week, so they’ll have to miss a day of school, which may or may not be a big deal, to some folks. For another, kids are short. You’re planning on watching a parade with hundreds of thousands, maybe even millions, of other grown fans. You’re going to have to go early, to guarantee a spot in the front, so they can see over everyone. Otherwise, be prepared to have them lifted up on your shoulders for extended periods.

Back to going early, though. It’s potentially a long day (in my case with the Raptors’, I was there around 9am, but the parade ran late, so it didn’t pass us until around 2pm). You don’t exactly have in and out privileges. If you claim a good spot up front, and then leave, you’re not getting that spot back.   I don’t know about you, but my kids have this habit of wanting to use the bathroom at the most inopportune times.  How would you feel if, you’ve been standing around for hours, crammed among a huge crowd of people, and in the distance, you finally see the team caravan coming, but you then hear these words:

“Daddy? I have to go to the bathroom really bad! I can’t hold it!”

Right.  Furthermore, my kids get restless pretty easily, which leads to boredom complaints, or worse. It’s just potentially a long, tiring day of keeping them entertained. I overheard at least one unhappy little camper asking to go home, about two hours into the Raptors’ parade.

Bringing lots of food and drinks is a good idea, in theory, but this will inevitably lead to bathroom breaks, which means spot-losing. My kids also have this habit of gobbling up everything in site and then, minutes later,  complaining that they’re still hungry. Food runs again leads to spot-losing.  I mean, sure, a championship parade is a fun event for families, and some, heck, maybe most families, have a positive experience, but I’d definitely put an asterisk next to them.

OK, OK, I get it. Ditch the kiddos. What should I bring, then?

Food and drinks are good, with the disclaimer mentioned above (if you’re moving around, throughout the parade route, that isn’t much of a problem, however). Comfortable shoes. Sunscreen. A fully charged phone, so when the good stuff happens, you have enough battery life to spam your social media with pictures to make your friends, to quote J-Lo, jelly.  Some fresh, official championship merchandise to wear.  An umbrella.

An umbrella? Because the parade goes on, rain or shine?

Nah. Because your favorite athlete might roll by drunkenly popping bottles of champagne and spraying them into the crowd. Champagne soaked clothes doesn’t sound like a comfortable look.

But if they’re pouring beer afterwards, I should be good, correct? Liquor before beer, you’re in the clear?

That saying doesn’t apply at all.

Whatever. What else shouldn’t I bring?

GUNS! Like, it’s a day about showing love to your team, and coming together as a community. There’s no need for weapons. Besides that, don’t bring giant signs that obstruct the view of those behind you. At the very least, if you do bring them, be smart about when you hold them up.

Do I need to do anything beforehand, to prepare? Should I memorize every player’s stats , so I’ll have some conversation points, when I’m standing for hours on end surrounded by strangers?

At the Raptors’ championship parade anyway, the crowd was massive, but it was a mixture of hardcore fans, casual fans, bandwagon fans who jumped on board when they realized the team might win the title, and people who were there out of FOMO. Basically, it wasn’t hard to make polite chit chat, so no need to bone up on statistics.

Beyond that, know the parade route, and have a good entry/exit strategy. Large volumes of humans converging in one area makes getting there and going home a bit of an adventure. Also, you know how when you go to a Santa Claus parade, and before Santa’s float comes, there’s like a million other stuff before that? Bands, maybe some insurance company’s car, with smiling brokers waving in it, that kind of stuff?

Same thing for a championship parade. It’s not just the team on a bus with the trophy. The Raptors’ one had some cars and buses full of people most wouldn’t recognise who were invited to take part. Sponsors, front office executives,  family members, etc.

Yeah. Shower and put on deodorant before you go. When the players do finally roll by, the mass of humanity around you will most likely lift up their arms to take pictures. I inhaled some interesting scents when that happened, to put it politely.