The Generation Gap Between Parents And Child

As a thirty-something year old dude, I’m still fairly young.  On occasion, however, thirty-something can feel like one hundred-something. Like it or not, a generation gap getween parents and child is evident.

You see, it’s easy to forget that some things which are common to me, are completely foreign to my kids.  I’m sure we all remember our parents telling us stories from their adolescence, which we couldn’t relate to at all (“You paid a quarter to take the train to see a Beatles concert, and got change back? For real?!”).  Inevitably, I expected to become a dinosaur to B and J in the future, babbling on about the good ol’ days.

What I didn’t expect was for the future to come so soon!

Because both of them are under the age of six, B and J don’t know about stuff  which was the norm just a few short years ago. They have no clue. Needless to say, this has resulted in some interesting experiences.

Here, lemme give you some examples:

WE USED TO READ WHERE’S WALDO, NOT PLAY IT.

While at the mall last year, I pointed out a “Where’s Waldo” book to B. Many an hour was spent by me as a youth looking for Waldo, Wenda, the Wizard, tastefully drawn nude characters etc.  B’s response when I showed the book to him?

Thanks, Nintendo Wii. Thanks.

We were watching a Toronto Blue Jays game on TV a couple of months ago. When the commercials came on, B grabbed the remote and tried to fast forward through them. It didn’t work, obviously. He’s used to watching shows pre-recorded, or  “on demand”.  I had a hard time explaining why we couldn’t zip past the ads (“Regular TV? What’s that?”).

A commercial free childhood? Sheesh. Must be nice.

NO REALLY. SHAQUILLE O’NEAL WAS A LEGENDARY BASKETBALL PLAYER.

B and I  watched the NBA Slam Dunk Contest recently.  He was blown away by what the contestants in it were doing. However, one of the judges, Shaquille O’Neal, kept giving the dunkers lower scores than what B thought they deserved. It ticked him off, to the point that he angrily demanded to know what was up.  Now to me, Shaq is one of the best, most entertaining ballers ever. I happily rattled off his accolades. B’s bitter response to this ?

“Well, why does Shaq ruin everything?”

So now, to B, Shaq is just some clueless old guy who has less basketball credibility than Kevin Hart. Shaqtin’ a fool, indeed.

Ever explain to a three year old girl how the Wu-Tang Clan CD that she put her food on actually has music on it? Unfortunately, I have.

Ever explain to a crying three year old girl why she could only talk to Grammy on the phone, but not see her as well, because your phone doesn’t have FaceTime? Unfortunately, I have.

Me – The Backstreet Boys.

B – Are they from a long time ago?

Harsh, son. Just harsh. It wasn’t even that long ago! People from that era aren’t exactly dropping like flies. Yo, if you survived the 90s, good for you, apparently.

Y2K WAS TERRIFYING. WASN’T IT?

During a Chris Jericho wrestling match, the crowd was chanting his nickname “Y2J”. B asked what it meant, and I started to explain that it was a play on words, on Y2K. I then kind of tailed off and changed the subject, because I couldn’t remember why Y2K was such a big deal. I mean, at the time, the world was supposed to end, right? 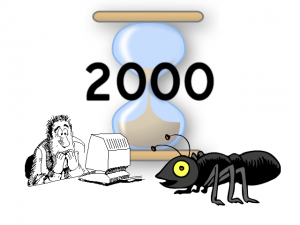 Hmm. Actually, if you survived the 90s, good for you!

MY ELDERS WERE MY MAIN SOURCE FOR INFORMATION.  I BELIEVED EVERYTHING THEY SAID.

Children are inquisitive and full questions.  Looking back, I’m sure I got a lot of B.S. from adults, when I was little. If they didn’t know an answer, it would require a trip to the library, or waiting until the door-to-door encyclopedia salesman came around, or something, to find one. I’m sure it was easier to fake it, just to shut me up.

With my kids, though? If I don’t know an answer, or if they think I’m lying, they’ll make me Google it.

Sometimes it’s easy to find (“Daddy? Who’s the oldest person in the world?”).

Sometimes it’s not so easy (“Daddy? Do you remember that man in that movie? You know, THAT movie? What was his name?”).

Sometimes, it’s WTF (“Daddy? How many people have ever died falling off cliffs? They do, too, keep track of this! Look it up on your phone!”).

Whatever the case may be, I don’t get why they have to have the facts instantly, as opposed to simply taking my word for it.

Anyway, you probably understand my point. The generation gap with your children can hit at any time. When it does, shoot, it can make you feel capital O Old!

That’s it for today. I think that I am going to go update my MySpace profile.

4 thoughts on “The Generation Gap Between Parents And Child”