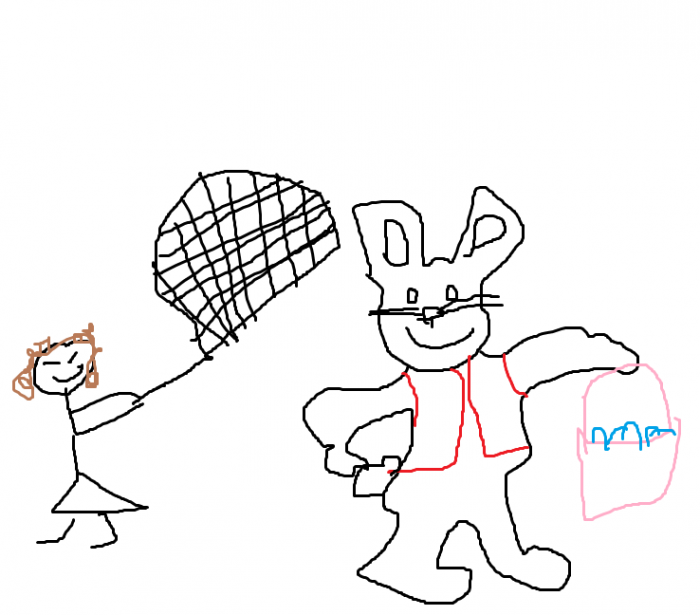 In terms of holidays, Easter is definitely on the “Mt. Rushmore of Best Days Of The Year”, for my kids.  Now, how this holiday has evolved from its origins to what it represents today is a thinkpiece subject for a far more intellectually stimulating site than this one. In our house, while Easter is mainly about family, it’s also about the Easter Bunny.  And truth be told,  B and J are all in on believing in that chocolate pimpin’ rabbit!  J believed so much, that she even concocted a harebrained scheme this year. It’s kind of a funny Easter story. Lemme explain.

It ’twas Easter Eve, and I was doing what any good parent would do – running out to the stores last minute, to buy some chocolate and presents. After scouring the picked over shelves, I did manage to find some decent treats along with some cool cheap gifts. The best one was a toddler sized basketball net that I found in the clearance section, for little KJ.  I also had been scouting the house out for days, looking for awesome spots to hide eggs for an egg hunt (plastic ones that I would fill with candy). So with everything I bought safely hidden in my car, and my mental plan in check, I headed home. All I needed was for B and J to go to bed in a good time.

However, in the week leading up to the big day, J also came up with a plan……

She was going to kidnap the Easter Bunny!

Now, K and I did try to explain how wrong this was. J was undeterred, though. She just wanted to see him with her own eyes.  As such, I would hear her plotting and scheming ways as to how she was going to get him. She’s been on a Looney Tunes kick lately, so I’m sure she thought capturing the wascally wabbit would be a breeze. To top it off, she even recruited B, to aid and abet in the plan.  After K and I fell asleep,  they were going to go downstairs.  They would “chill out and watch TV”, in B’s words, to wait for the bunny’s arrival.

This plan sucked, quite frankly. I’m all for the kids having fun and keeping the charade alive. However, similar to Christmas, the key is for the kids to be asleep, so the magic can happen. The last thing I wanted was for B and J to sneak up on me as I was setting things up. Thus, the stage was set. Me versus the kids, in a battle to preserve the legend of the Easter Bunny!

As K and I binge-watched Seven Seconds on Netflix that night, J passed out by 9pm. Unluckily for me, B was wide awake. K got tired around midnight, and headed to bed, at which point B ran in to join her. While the Easter Bunny had probably visited your house hours before, and you were enjoying a good night’s rest, I had even started anything yet. Plus one potential magic-ruining boy was still up.

I figured that B would be asleep soon. If I waited a bit, I could quietly start getting organized. So, eventually,  I grabbed my  keys, went to my car to get my stuff…..

I must have looked like the biggest doofus, standing in my driveway for like 5 minutes, dumbfounded.  K had told me earlier that vehicles had been stolen off of our street that week. Apparently mine got taken, too!  What kind of A-hole plays real life Grand Theft Auto on a holiday? I was confused and angry. The kids were going to be bummed out, because the Easter Bunny didn’t come with anything.  Brutal.

I had to break the news about the carjacking to K, and by default B, since he was still awake in our bedroom. B was shocked, but when I told K, guess how she reacted?

Yeah, she pranked me, since it was April 1. She thought I would go grab coffee in the morning, so she moved my car around the block that evening, to make it look like a theft. She forgot that I had all of the Easter stuff in my trunk, though.  I can’t lie. It was a funny joke, bad timing aside.

I waited for B to settle before retrieving my car, but then I got to work.  As I put together the eggs in the living room, I heard J’s bed squeak upstairs. Panic immediately set in; I tossed a blanket over the stuff.

Then I heard little footsteps.

And then I heard our bedroom door open.

Then I heard J loudly whispering to B to wake up.

Then I ran upstairs to squash that noise!

I told her that I wasn’t going to bed soon, so she shouldn’t bother trying to be sneaky.

Then she fake slept.

That was good enough for me, so I headed back downstairs.

I still had to set up KJ’s basketball net. I immediately realized why it was on clearance. Picture trying to put together Ikea furniture, but with less instructions, and more hard-to-unpackage, ill-fitting parts, and you get the idea. After fumbling with that for a while, it was now well past 2:00 AM. I tapped out. Instead of an epic egg hunt, I was exhausted, so the hunt consisted of me lazily scattering the eggs in our living room and kitchen. Your dude was then able to settle in for a good night’s rest.

However, the day wasn’t about grownups. All three kids were happy with their haul, and the hunt, so that was all that mattered. J’s already vowed to catch the Easter Bunny next Easter, unfortunately.

Stay tuned for the sequel, which I’m sure will be another funny Easter story.