While in downtown Hamilton this weekend, I ended up walking past Gore Park. A ferris wheel has been set up there this month, which you can ride for free. Despite being alone,  I totally went on it, because, well, free ferris wheel ride, duh. As I sat in my carriage, going round and round, taking in the sky high view of my hometown, a Forrest Gump-like thought entered my head. Life is kind of like a ferris wheel. Through the highs and the lows, things tend to always come back around full circle.

I mention this because it relates back to the reason why I was downtown, to begin with.  The Good Shepherd was hosting their annual Christmas dinner event, at the Hamilton Convention Centre by Carmen’s, and I had signed up to be a volunteer.  While this was my first year volunteering, it was not my first year attending an event like this. Back in the day, things were always tight money-wise, to varying degrees. On more than one occasion, the best meal and toys that little Mike got over a holiday season came courtesy of the Good Shepherd, or a similar organisation which helped those in need. And yeah, for the longest time, I’ll admit to being a bit ashamed about this.  I grew up being the dude who was usually “without”, surrounded by people who were “with”.  These experiences were my own little secrets, ones that I tucked away and never really looked back at it.

I really wasn’t sure what to expect when I got to that dinner. One thing that I wasn’t expecting was the crowd. I arrived early, and had to wiggle my way through large throngs of people, to get to the door. Later, I was told that a lineup had formed, which stretched down to MacNab Street. All in all, there were more than 2000 guests and about 800 volunteers  in attendance.

The other unexpected thing was how much time and effort was clearly put in to make it seem like you had been transported to a winter wonderland.  A band and a choir comprised of volunteers performed holiday songs on the way into the dining rooms. The dining rooms themselves were festively done up. On the lower level, Santa was in the house, flocked with toys to give out.  Some of the giant inflatables for kids to play on even fit the snowy theme. At the exit, a donation area was set up, for you to grab free winter clothing if needed, to help stay warm. 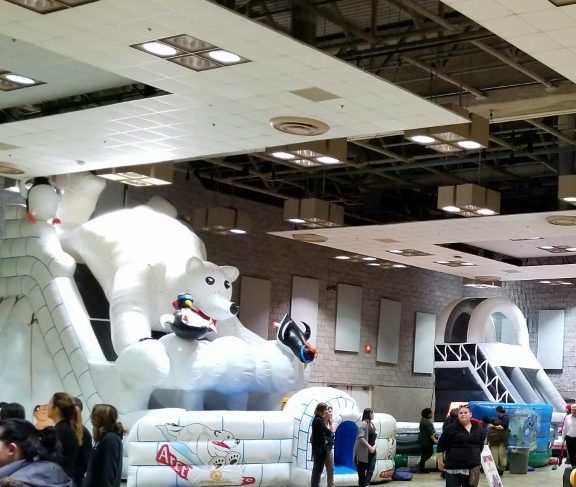 I was part of the serving team for the day, which basically involved running back and forth to the kitchen, making sure that there was always food on hand. No trays of turkey were dropped by yours truly, which was a win in my books. Another win was the amount of people young, old and in between, who came out to help. From my numerous conversations with other volunteers, the common theme seemed to be that, for many folks, this was annual tradition.  My team leader, Lisa, for example, had, over the years, done almost every job possible at this event, and happily kept everything on track for us. Annette Hamm, a local news personality, was also on my team. She was a repeat offender (when it came to volunteering there!) and offered me some great advice.

The Good Shepherd opens the doors to their dinner to everyone and anyone. You can’t judge a book by its cover, but I can only assume that people from all walks of life came out to eat.   At one point,  among the sea of happy faces, I saw a little boy who resembled me when I was younger, sitting at a table with his mom (I’m assuming). I’d like to say that we then locked eyes, and that something profoundly, magically, Chistmas-spiritually happened, straight outta Hallmark. In reality, he probably wondered who this weird guy was that was staring at him, and I had to run off to get more mashed potatoes. At the end of the event, though, I did see the mom rummaging through the donated winter items, and giving him a scarf, which made him smile as if he just got a Playstation 5.

Look, parents tend to reflect on the jobs that their parents did on them, and want to do better than that with their own children. I’m no exception. When I see B and J’s annual Santa wish lists, and how thrilled they are, when they actually get what they asked for, I remember all of those years when little Mike would make his own lists, yet those lists had no chance of ever being filled. Shoot, on Black Friday this year, I woke up early, to go to a Real Canadian Superstore to buy a TV. On the way out, because I spent more than $250, the store gave me a free frozen turkey.  When I told this to my family, no one cared, and we ended up giving it away to a friend. On some hungry nights, little Mike would have given his right leg for a right turkey leg, but here’s current Mike out here giving turkeys away, like it’s no biggie.

I guess what I’m rambling about is this. Though it’s been said many times, many ways (probably), everyone deserves a good meal this time of the year. Everyone deserves to feel a little bit special, too, especially kids. I’m glad that organisations like the Good Shepherd exist to help facilitate this.  While not profoundly, magically Christmas-spiritual, it did finally dawn on me that we should be more appreciative, because things really do come around full circle.  Ain’t no shame in that.