Like a lot of people in Canada, my family has gotten sick this year. We have a bad case of…..

For the first time in forever (word to Elsa and Anna), the Jays are a playoff team, And, for the first time ever, my kids (B especially)  are actually into the games.  For longtime fans like K and myself, it’s been real cool getting caught up in the excitement this year.

With all the excitement comes a lot of reminiscing. Not gonna lie,  it’s got me feelin’ a bit nostalgic, too, right now. Some of my favorite memories with my family have occurred at Jays games………

At the very first game that we took B, too, when he was a baby, I caught my first and only foul ball!

Caught is a bit of an exaggeration. Aaron Hill ripped a ball towards our section. It looked like it was coming straight for our heads, but it ended up  ricocheting off the seats in the empty row behind us. I immediately hopped out of my seat, to run after it. I snatched the ball up right before an older lady with a cane could get to it. Yes, that moment looked as lame as you’re probably picturing it. BUT, before the other fans could boo me, I gave it to B. 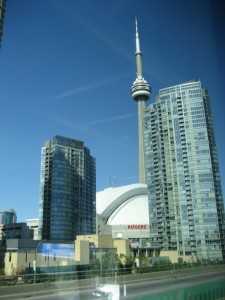 One lazy weekend, when B was three years old, I scored a couple of primo seats to a game. They were like 10 rows up from first base. It was quite the adrenaline rush, walking down and down the steps, snacks in hand, to our seats. I imagined people in the rows farther back staring at us jealously, as we sauntered by.

The first two innings were great. We crammed our faces with food, while cheering on Toronto. By the third inning, we had run out of food/money, and B was super whiny about wanting to leave.

I imagined the jealous people before were now snickering, as I carried B with my head down up and up the never-ending steps. It was my first and only walk of shame. On the plus side, we did spend the remainder of the game exploring the Rogers Centre and the stuff around it so it wasn’t a total waste of a trip.

I decided a sequel was in order, about a year later.

Once again, I got a couple of seats last minute to a game, for B and I. Luckily for us, it was Fan Appreciation Day as well. Merchandise was heavily discounted, so I was able to get B his first real Jays jersey! I also got something for myself.

Anyway, during the game, they had a bunch of giveaways. You know the deal. Some random 90s dance music starts blaring, and the cheerleaders or whatever come out, with swag. Hats or shirts, typically. They tease tossing it for a bit, while you jump up and down, hoping that they’ll give it to you, before they finally end up throwing it to someone not named you. Usually a little kid. During the sixth inning,  B had been pretty good to that point, but he wanted to leave. Before we were going to go, though, it was giveaway time. One of the cheerleaders actually came down right beside us. She did the whole teasing thing for a bit while the crowd went bonkers…..and then tossed a hat to B! Our first and only swag snag! Unfortunately, it was an adult sized hat, so he couldn’t wear it. Don’t worry, I’ve put it somewhere safe. 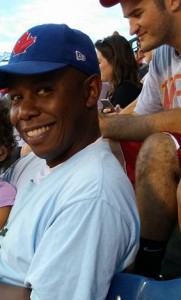 What? My head is safe.

One more for you – during our road trip to Philadelphia, it turned out that Blue Jays happened to be playing the Phillies while we were there. So, of course we got some cheap seats and went to a game!

For real, I was a bit nervous before going. The fam was all rocking Jays paraphernalia, you see, and I had heard some horror stories about disrespectful Philadelphia fans. Fortunately, everyone there was cool. We didn’t get pelted with beer or anything like that.

About halfway through,  B and J started to get restless. I was worried that they might start making the people around us upset, if they kept acting up. Since we would probably never go to Citizen’s Bank Park again, we decided to walk around. Randomly, K ran into one of her friends, while waiting in line for food. Her friend had also made the trip down from Hamilton, to Philly. While they chatted, I noticed a bunch of big dudes were posing for pictures on the concourse. They were all decked out in Temple University gear. I asked one of the attendants what was up. She told me they were Temple’s football team, and they had a section reserved for them. Neat!

The line for food/K’s convo were both pretty long. As we waited, I noticed all of the big dudes were gone.  The attendant came over to me again, to chit chat. I casually mentioned how we were up in the bleachers before, but the kids were stir crazy there. She then told me that Temple’s team had left, and asked if I wanted to sit in their section. No one else would be there. Uh, our own private section? Heck yeah! So off we went, which is where we watched the rest of the game!

There’s more examples, but I’ve gone on about this for long enough. I think you get my point though. It just seems like, whenever we go to a Toronto Blue Jays game, there’s always something memorable about them (besides the fact that they always seem to lose when I’m in attendance. Sorry, T-Dot). 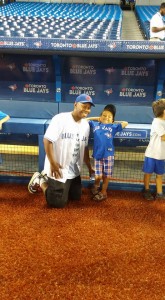 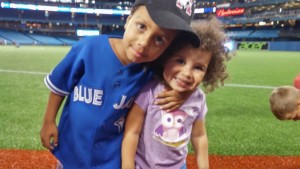 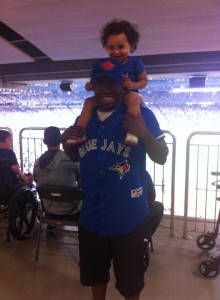 It’s funny how some things can really bring a family together. In our case, it’s cheering on the Jays. Man, even their playoff run this season has been must-watch TV in our house!