Since my mom passed away last October, holidays like Mother’s Day and Father’s Day have me in a reminiscing state of mind.

See, my dad was never in the picture, growing up. Like, at all.  I only had my mom. The single parent thing isn’t uncommon, of course, but back in the day, when I was little, at my school, it wasn’t normal. So, for Father’s Day, when other kids were making cardboard ties and whatnot for their dads, I was usually the only youngster making one for their ‘father figure’ aka my mom.  I didn’t really care, though. Between that and Mother’s Day, she was the only one getting twice as many dope gifts from their child!

Having small kids now, my favorite thing about this time of year are those type of gifts that they make for me. Knowing they took the time to hook me up with a present which they worked hard on is a beautiful thing, no doubt. It reminds of when I was a young boy, which I’ve been thinking a lot about lately.

Truth be told, being a parent is the best, most rewarding thing that I’ve ever done. Yeah, I usually share the nonsense on here, because there’s a lot of nonsense. Heck, the other day, at B’s baseball game, I kept hearing people talking about someone named Dawson. “Good job, Dawson!”, and stuff like that. I eventually realized that they were talking about B. For no apparent reason, he started telling people that his name was Dawson.

Nonetheless, random 90s teen show aliases aside (and yes, we sent “Dawson” up the creek, for that stunt), there’s a lot of goodness to parenthood, too.  I can’t imagine not being apart of B, J and KJ’s lives. How anyone looks at the prospect of being a parent, says no thanks, and bounces, never to be seen or heard from again, is ridiculous to me,

Another point along these lines.  If K’s out  doing something, and I’m on my own with the three kids for a while, it’s a guaranteed struggle.  Fortunately, my difficulties are only temporary, however, and we go back to being a tag team soon enough. You do anything for your kids, period, but I appreciate now how hard it was for my mom to do what she did, on her own.

Someone called me a ‘superdad’ the other day, which, while nice, isn’t accurate at all. I’m just a basic guy who tries to be there for his kids as much as possible. But to the real superdads, super father figures, and people who are just trying to be the best that they can for their family, to you I say…. 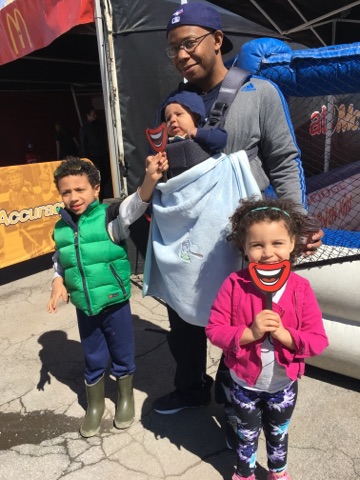