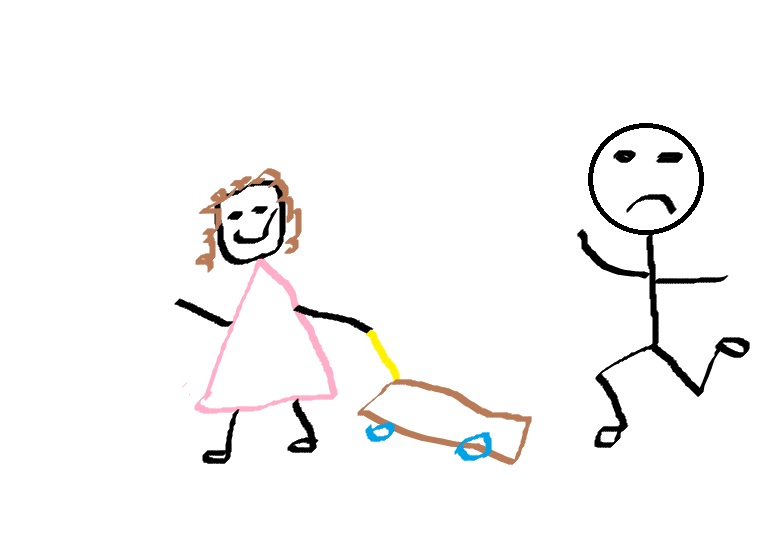 I thought that things would be different.

Getting B to go to bed occasionally borders on ridiculous. Some of his exploits have been legend – wait for it- dary (word to Barney Stinson!). He’s a non-stop maniac.

Conversely. J has such a chill personality. I figured that once she hit the terrible twos, by comparison,  getting her to hit the sack every night would would be Easy Street.

As usual, I was wrong.

Take the the other night, for example. K had gone out, so it was just me with the kiddos. My routine evening was then, of course, interrupted by the Bedtime WTF Awards! The nominees are:

1) To encourage the kids to use the toilet before bed, we’ve been giving them little treats if they go potty. What a foolproof system, right? No possible room for loopholes.  So, with the promise of chocolate, B dutifully took a duty in one bathroom, and J took a tinkle in the other bathroom. After I gave them their chocolate, B said that he had to go again. He clearly just wanted another chocolate, and held in some poop, so he took off to the bathroom J was in previously.  Yeah, Maybe my system isn’t so foolproof, I know. J, upon realizing that there was a chance for more chocolate,  ripped off her diaper and took off to the bathroom that B was in before. I helped her onto to the toilet and had this conversation:

Silence. Blank stare. Then she hopped down and walked away.

2) After the kids’ bowels were empty, it was story time! I asked B to pick a story. He looted his book shelf…and selected the one book that wasn’t a story. It was some educational phonics workbook. I told him to try again. He did some more looting…and, with a smirk, handed me the same workbook, but upside down.:

3) I figured that I’d stay upstairs and get some important work done. And by important work, I mean stretch out in my bed and watch Lebron James work his magic. The kids were in B’s room. Suddenly, J walked into my room. She had her nightie lifted up and was wearing a pull up diaper in such a way that it somehow looked like she had crotchless panties on. I walked her back to B’s room, and saw that B was trying on different pyjamas and pull ups. I don’t know, maybe he was walking the red carpet later and wanted to pick the right outfit.

4) Anyway, I got them dressed proper after that, and left.  All was quiet for a few minutes. J then walked in my room again, but with B following her. She closed my bathroom door,  closet door, and then my bedroom door behind her as she left. I got up, went to follow them, and saw that every door was closed upstairs.

B aka Captain Obvious – ‘She closed all the doors, dad.’

5) After getting them tucked in, I left to go back to my game. I could hear the kids talking. Not long after, B ran into the playroom. Said that he wanted a couple of toys. OK whatever. Not long after that, J walked by pulling this: 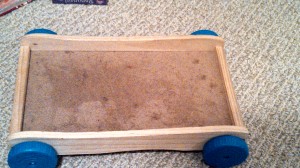 I saw her loading it up with a bunch of random things. Cars, stuffed animals, a box. She then walked back with it to B’s room. Weird. At the next commercial, I went to see what the deal was. To say that it was a disaster would be an understatement. They had took apart a shoe rack from B’s closet. B had put blankets and pillows on a couple of rack pieces. He actually stacked two pieces so that one end was elevated up a bit. I have no idea what J had in mind. She had the pull toy on top of her rack, on top of her pillow. I stood there in shock, like my name was Jay-Z and my wife’s sister suddenly started pummelling me in an elevator. B climbed over the mess, wrapped himself in a blanket, and lied down on a rack:

We tidied up a bit. Shockingly enough, they were fast asleep a few minutes later.

That night’s winner: Lebron. Doesn’t matter what the competition is, Lebron always wins.

That night’s loser: Me.