Creative Elf On The Shelf Ideas for the Busy Parent

I don’t know about you, but I struggle with the Elf On the Shelf fad.  It’s hard, yo. After a long day, when the kids are finally asleep, the last thing that I want to do is come up with a zany new place to put the elf. Creative elf on the shelf ideas just ain’t my thang.

However, my kids love looking for him everyday.  As a result, for almost everyday in December, I gotta man up and do it, for B and J’s sake.

If you’re like me, you’re busy with other stuff , and don’t have much time to spend on thinking of cool spots for your elf. However, don’t fret, my pet.  I got your back on this.

Here are some quick and easy ideas for ya! 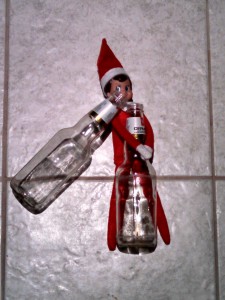 Haha! Look at that lil’ bugger, all passed out after gettin’ his drank on!

It’s inappropriate for children to find him in an inebriated condition? #NSFW?

Aight, aight. Scratch this one then…. 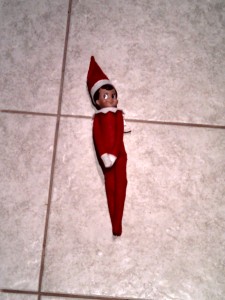 Just leave him in the middle of the FLOOR,  with no alcohol! Your kids won’t expect that!

Scratch this one, too.

B told me that one of his classmates cut the arms off of his elf. He told me in this weird way, though, that was equal parts shock/curiosity. I don’t know how effective the threat of making the elf lose his magic is, to a mischievous four year old boy. Maybe leaving an elf so easily within arm’s reach is a bad move. 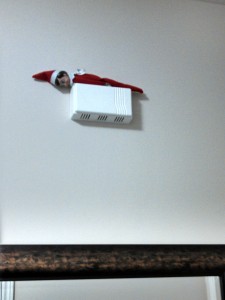 Ahhh, much better. A bird’s eye view, out of harm’s way.

Continuing on, as an option…….you could also put your elf…….um…….

I’m out of ideas.

Hey, this was fun, everybody, but this is the end of the post.  I hope that I’ve been of some help. Happy elfing! 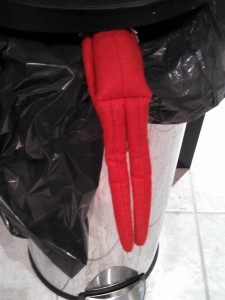 I got nothing.  This is too much pressure. Why can’t I throw him out now? I’ll just tell B and J that he’s in a super secret hiding place. They’re young. They’ll understand. 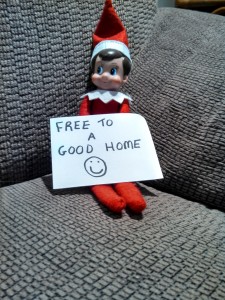 I’ll just take him to a corner, with his sign, and leave him there. Maybe I’ll make him a little stick with a bag tied on the end of it.  Get him a mini shopping cart to push around. Wipe some dirt on his face, to make him really sorry looking, so someone will take pity and scoop him up ASAP. 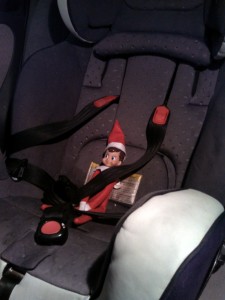 We’re going for a nice, long drive to the forest. Don’t worry, there’s nothing shady going on. See? The elf is even buckled in.

What do you mean, you don’t believe me? Yes, if I leave with the elf, we’re both coming back home!

OK, OK. I’ll remove him from my car. He’s not coming in my house again, though! 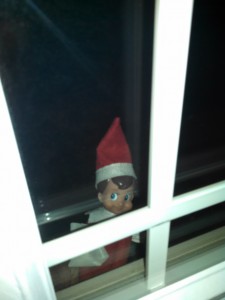 No, I don’t think that he looks cold. The way that that he’s sitting there, smiling, I think that he looks like a Peeping Tom.  How’d he get up on the window, anyway? I left him on the ground.  Ah, the magic of Christmas.  And yes, it is snowing, so he’s probably a bit wet.

Oh, fine. I’ll bring him inside, and dry him off. Bah humbug! 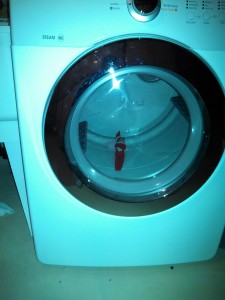 My first choice was the microwave, but apparently, I shouldn’t use that. So, let’s go with this, instead.

Well, how else am I supposed to dry him?

He’s not real! The dryer won’t kill him! 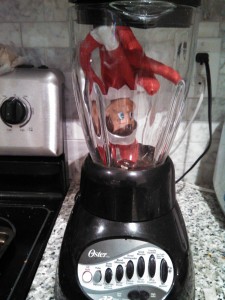 Now, the blender on the other hand, that will kill him.

Don’t worry, no elves were harmed in the making of this post.

It still kind of sucks, though. Elfing ain’t easy. And by the way, I’m not that creative. Guess I should have led off with that.  Better creep some other sites, if you’re looking for some fun and wacky sources of inspiration.

Worst case, if you’re stuck, there’s always the middle of the FLOOR!