One skill that I get to work on a lot at home is negotiation. Nothing is easy with the kids, that goes without saying.  However, B is in this phase where he’s always looking to cut deals, on basically everything.  Eating meals, bedtime, getting ready, cleaning up etc… all this stuff is done once a mutually beneficial agreement has been arranged. Do you know hard that is to live with? To constantly be negotiating? Next time that there’s a hostage that needs to be taken down, gimme a call,  I’ll send B over to take care of the situation.

Want an example? Alrighty yo. This conversation happened a few months ago:

B (picks up an orange Chevy, adds it to the other three) – ‘This one.”

B – ‘No (picks up another car, adds it to the four). This is.’
Me – ‘That’s more than three! You can only take three!’
Anyway, eventually B did settle on three cars to take to bed. And that’s that, right? Wrong.
Half hour later, K went to check on him. I stupidly left the rest of the cars in the hall, and B sneakily went and got them. So, of course, K caught him playing with all his cars in his room. Naked, for no apparent reason too. I got him dressed, and had to lay the heavy on him:

Me – ‘So now we’re going to have to take all your cars away. Instead of three cars, you were sneaky, and now you don’t get any.’

And that’s that, right? Wrong.

Because, there’s always room for negotiation! 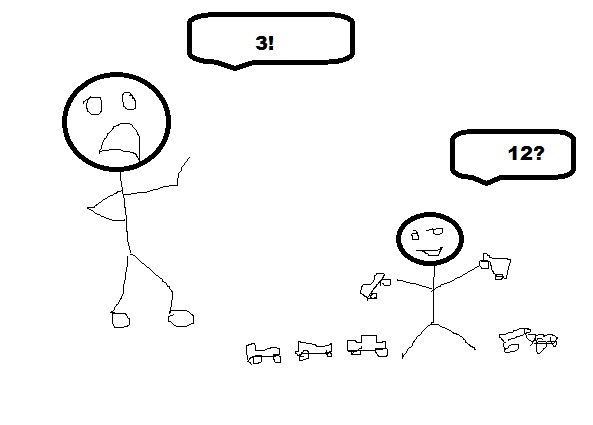